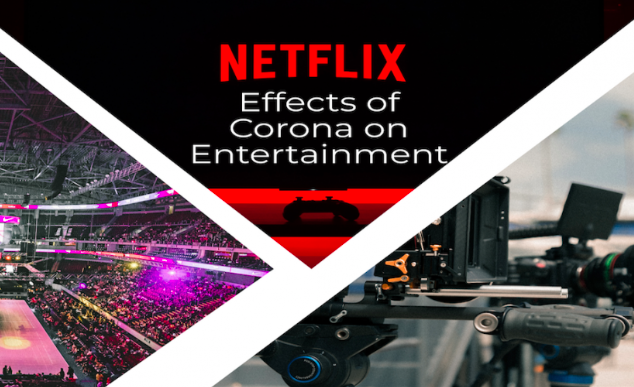 COVID has changed the way we interact with other people. This pandemic could change how the entertainment business works to bring theaters to the home. (Photo Credit: Sawyer Salgado/Achona Online/Piktochart )

COVID has changed the way we interact with other people. This pandemic could change how the entertainment business works to bring theaters to the home.

How COVID-19 Is Changing The Entertainment Business

COVID-19 is affecting daily lifestyles, especially in the entertainment business. The production of movies, cable tv, and streaming companies are being impacted by this. Self-isolation is increasing the amount of people watching movies and shows.

Megan Smolarick (‘24) said, “It’s impactful on everyone involved like the people behind the scenes and also the people on screen.”

All movie production has ended until March 30. With the movie theaters shutting down, the releases of movies are postponed. Universal Pictures however, has released some movies at the same time they were supposed to be released in theaters. This could change the future of movies from being in theaters to being at home for a significantly lower price than a family ticket at the theaters.

According to the Los Angeles Times, “The Universal tactic mirrors a controversial strategy known as premium video-on-demand that had been tested years ago as consumers have clamored to see movies at home sooner.”

The cancellation of sports for ESPN has caused a significant drop in viewers watching cable tv. As live tv shows are being cancelled, there is also a question of advertisement. However, television shows like Stephen Colbert and Jimmy Kimmel have adapted to homemade shows, bringing humor without the use of breaks.

Kailey Mcdonald (‘21) said, “I mean it has to be done, there is no way that people can take the right precautions when making a movie or a show. We all have to be part of the solution, even the stars.”

People have looked for other alternatives such as subscriptions to HBO, Netflix, Disney Plus, and other streaming services that offer a variety of things to watch. Disney’s decision to release “Frozen 2” three months in advance was in an effort to appease its subscribers.

There has been an increase in streaming; for example Netflix’s “Tiger King” is very popular. But, there is a problem with streaming companies having too many subscribers. According to CNBC, “Still, streaming services from Netflix to Disney+ have taken steps to reduce their bandwidth utilization and cut picture quality in an effort to prevent network congestion.”

The uncertainty of the internet usage as we know it could eventually lead to prioritization of big cities and bigger populations. These big companies have the power to decide where the streaming qualities are in places for better or for worse.  However in this time of the pandemic, according to Forrester’s Bieler, “You need to spread the load across the network.”