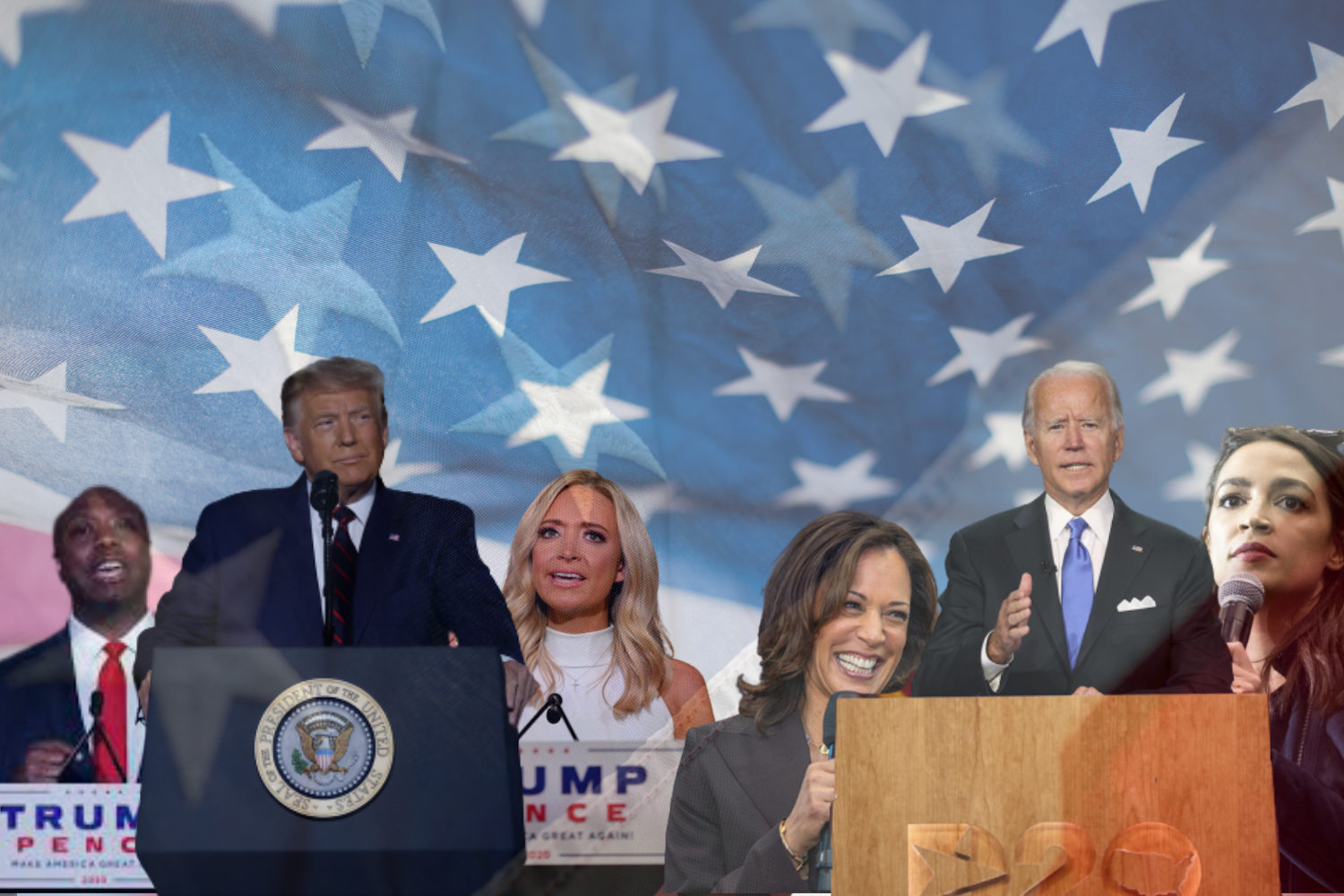 Due to COVID-19, this is the first year that delegates had to Skype in to the conventions. (Photo Credit: Allyson Smith/ Achona Online/ Piktochart)

Due to COVID-19, this is the first year that delegates had to Skype in to the conventions.

Breaking Down the Republican and Democratic Conventions

At both the Republican and Democratic National Conventions, the speakers chosen highlighted the values and differences of opinion of each party. The Republican National Convention had a diverse range of speakers from all walks of life including Kayleigh McEnany, Senator Tim Scott, and Ann Marie Dorn, the widow of retired St. Louis Police Captain David Dorn. Overall the speakers at the RNC focused on President Donald Trump’s accomplishments, law and order, and patriotism.

“These speakers talked about what President Donald Trump has done for our country, how he has supported them as an American, and how he will continue to have a positive impact and make change,” said Abigail Echenique(‘21).

The Democratic National Convention also had a wide range of political figures as well as celebrities who spoke at the convention. The convention included former First Lady Michelle Obama, Senator Bernie Sanders, and the siblings of George Floyd, Rodney Floyd and Philonise Floyd. The speakers at the DNC centered their messages around unity, racial inequalities, and the Covid-19 Pandemic.

Mei Lamison (A’20), former Achona Editor and Chief, said “I personally thought the words of Representative Alexandria Ocasio-Cortez, former First Lady Michelle Obama, and civilian Kristin Urquiza were the most impactful. They each warned of Trump’s second term and advocated new policies and perspectives to fix the problems at hand.”

While both of the conventions laid out the future they would like to see for the United States, the public opinion of each convention could not be more opposite.

How can Democrats lead our country when they spend so much time tearing down our country?”

“While the DNC brought up Democratic policies, they only seemed to skim the topics without going fully in depth about what they will mean for America in the future. The RNC on the other hand dove head first into the Republican policies that will change America for the better, this being restrictions on abortion, national security, and our 2nd amendment right to bear arms,” said Echenique.

In typical fashion, both conventions attacked the opposing candidate.  The DNC pointed out the policies of the incumbent that they see as problematic while the RNC spoke to Biden’s record and the policies he is currently promoting in his campaign.  President Trump also questioned Joe Biden’s “radical” platform.

“The DNC’s values seem to be grounded in inclusion, racial equality, and progressive action. Still, these are just promises. I’m not sure if the Biden administration will continue with this new sense of activism once in office,” said Lamison. Respondents also question President Trump’s argument that the DNC has embraced a more progressively left platform.

The RNC advocated President Trump’s re-election just as the DNC advocated for Joe Biden’s election. While each convention’s intentions were to stay civil when speaking about the other side they both managed to take shots at each other.

The current president has cloaked America in darkness for much too long. Too much anger. Too much fear. Too much division.”

Laura Caroline Jung (‘22) said, “Another prominent talking point was that Biden would be ‘a pawn of the radical left which is trying to ruin America’. I interpret that as the Republican Party playing off the fear of their base by labeling Biden as an enemy of public interest and everything that is wrong with Democrats without providing evidence that Biden supports such “radical” policies.”

There are a wide spectrum of opinions on each convention. Every person has their own opinions and views even within the Republican and Democratic parties. When someone belongs to one party they may not have the full picture of the other party’s views.

“He [Trump] will continue to have a positive impact and make change. While the DNC seemed to focus on everything that was wrong with America, the RNC continued to discuss how we can better our country and focused on what is right. Additionally, the versatile line up for the RNC stood out to me, ranging from nuns, to small business owners, teachers, and even former soldiers, nationalism was evident through each and every one of their words,” said Echenique.

Depending on whom individuals talk to and what political party they associate themselves with their view of the opposite party’s convention is usually unfavorable. People from both parties viewed the other party’s convention as biased and formed their own opinion of the agenda and candidate presented. While both parties’ visions of a future America are in extreme contrast with each other there is one common message, the American people need to go out and vote on November 3.