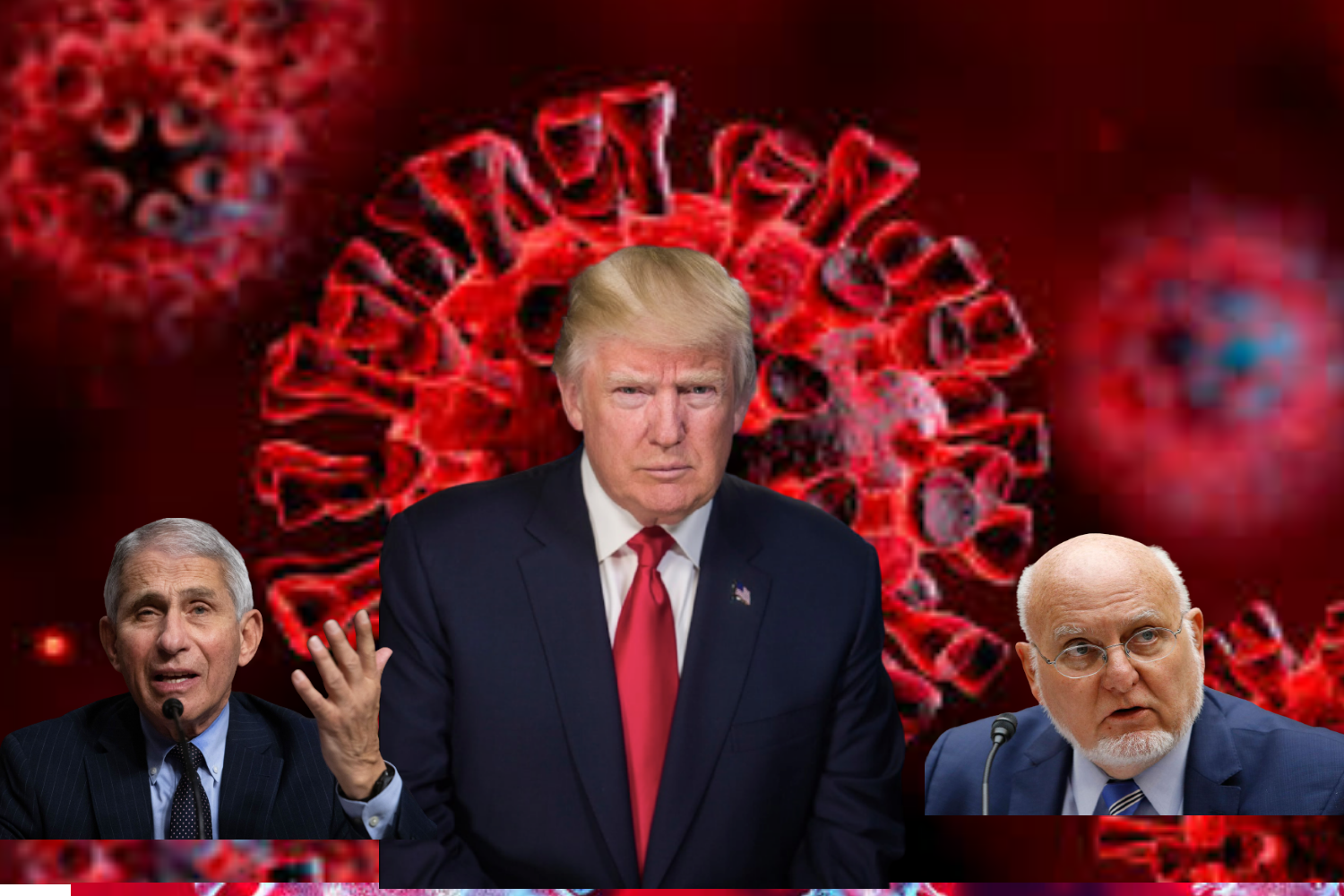 “This was unexpected . . . And it hit the world. And we’re prepared, and we’re doing a great job with it. And it will go away. Just stay calm. It will go away,” said President Donald J. Trump. ((Photo Credit: Kimberly Egoavil/Achona Online/Piktochart))

“This was unexpected . . . And it hit the world. And we’re prepared, and we’re doing a great job with it. And it will go away. Just stay calm. It will go away,” said President Donald J. Trump.

How the Coronavirus has Become Politicized during the Pandemic

On Mar. 1, 2020, President Trump declared the United States in a state of national emergency due to the coronavirus.

This news unleashed six months of alarm, with over 200,000 Americans dead and almost 7 million cases in the United States alone. To further complicate matters, the Republican and the Democratic parties have stayed divided on this topic as well as government and health officials.

As the pandemic dragged on, President Trump delivered the news, made mandates, and established policies. All throughout February and March, he reassured the public and stated via Twitter, “The Coronavirus is very much under control in the USA. We are in contact with everyone and all the relevant countries. CDC and World Health [Organization] has been working hard and very smart. Stock Market starting to look very good to me!”

However, on Sept. 9, taped interviews with Journalist Bob Woodward were released. President Trump said, “This is deadly stuff. You just breathe the air and that’s how it’s passed, and so that’s a very tricky one. That’s a very delicate one. It’s also more deadly than even your strenuous flu.”

I wanted to play it down. I still like playing it down, because I don’t want to create a panic.”

His words caused mixed feelings among Americans. Some agree with him like Cassandra Hiatt (‘21). She said, “I think downplaying it was a better option in the beginning because if he hadn’t, our society would’ve turned into complete chaos.”

However, others wish he had not downplayed the virus.

Avery Rogan (‘23) said, “I think that the virus should not be downplayed because human lives are at risk. In my opinion, his focus on bringing the economy back to fulfill his campaign promises is too influential in the country’s decision-making process and has come at an enormous cost to all of the families that have lost loved ones because of Trump’s mismanagement of COVID-19.”

The differences in the statements between President Trump and health officials such as Dr. Anthony Fauci and Dr. Robert Redfield has also led to public distrust and confusion.

On Aug. 5, 2020, President Trump said, “If you look at children, children are almost, I would almost say definitely, but almost immune from this disease. So few. Hard to believe. I don’t know how you feel about it but they have much stronger immune systems than we do somehow for this. They don’t have a problem.”

Researchers and pediatric doctors, however, say that immune is not the correct word to use. As immune’s definition is “not infected or influenced by something.” During quarantine, children made up 1% of the death rate, but with schools reopening that could be subject to change. 20% of kids also tend to be asymptomatic, so while they might not experience the worst of the virus, they are the “silent spreaders.”

In addition, President Trump in a task force briefing on Apr. 24 said, “I see the disinfectant where it knocks it out in a minute. One minute. And is there a way we can do something like that, by injection inside or almost a cleaning?”

New York City Poison Control Center saw 30 cases of exposure to Lysol, bleach, and other cleaners 18 hours after President Trump’s suggestion. In addition, the American Association of Poison Control Centers noticed that there has been a general increase in poison control calls across the nation.

Pulmonologist Dr. Vin Gupta responded to this stating, “This notion of injecting or ingesting any type of cleansing product into the body is irresponsible and it’s dangerous. It’s a common method that people utilize when they want to kill themselves.”

As a physician, I can’t recommend injecting disinfectant into the lungs or using UV radiation inside the body to treat COVID-19. Don’t take medical advice from Trump. https://t.co/YcZXJXfSxu

Using heat and light (UV radiation) as a possible cure for the virus was also mentioned by the president. He said, “And then I said, suppose you brought the light inside of the body, which you can do either through the skin or in some other way. And I think you said you’re going to test that too. Sounds interesting.”

Yet, Molecular Biologist Brian Heimbuch said,“I’m getting calls every day . . . It scares me that people are going to hurt themselves with UVC.”

And on Sept. 16 Redfield told a Senate Panel that a very limited supply of a Coronavirus vaccine may be available between November and December, but it would most likely be available to the general public not until the summer or fall of next year.

His remarks were contradicted that of President Trump’s as the latter said, “We’re very close to that vaccine as you know and I think much closer than I think most people want to say . . . That will be from mid-October on. It may be a little bit later than that.”

Lastly, the effectiveness of wearing masks has been a topic of controversy as well.

“The mask is not as important as the vaccine,” said President Trump.

However, Redfield said the opposite: “Cloth face coverings are one of the most powerful weapons we have to slow and stop the spread of the virus – particularly when used universally within a community setting. All Americans have a responsibility to protect themselves, their families, and their communities.”

This has led to many Americans to follow one’s political party’s opinion rather than that of health officials as statistics show.

A study conducted by Pew Research Center found that 53% of Democrats have a great deal of confidence in medical scientists to act in the public interest, while only 31% of Republicans do.