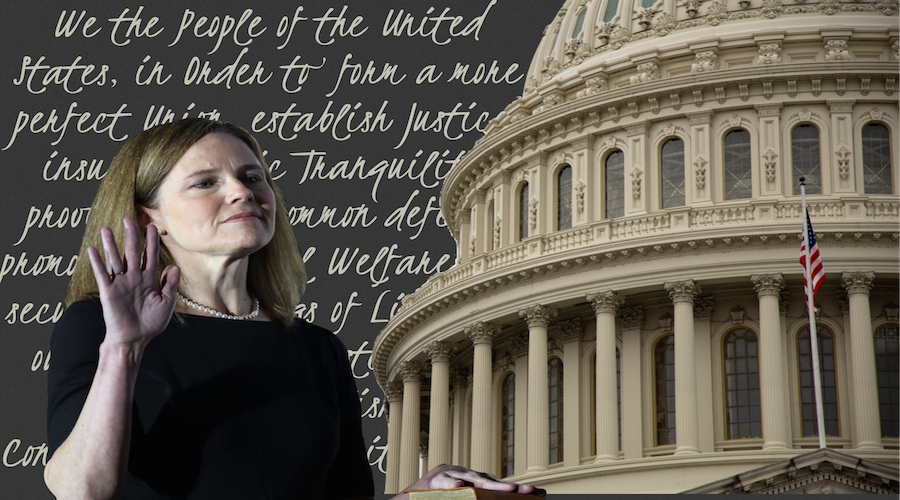 Amy Coney Barrett serves as the first mother of school-aged children on the Supreme Court.

On October 26, Amy Coney Barrett was sworn in as the next Supreme Court Justice of the United States shortly after the Senate voted 52-48 in favor of confirming her.

Her confirmation sparked outrage among Democrats, who claim she is unfit for the position and that her confirmation should have waited until after the election. Senate Minority Leader Chuck Schumer, D-N.Y., called the speedy confirmation a “cynical power grab.”

Republicans, on the other hand, were pleased by the confirmation. Senate Majority Leader Mitch McConnell, R-K.Y., called it the “single most important accomplishment of [his] career.” McConnell was one of the primary forces pushing for Barrett’s confirmation. “I’m proud of it, and I feel good about it,” said McConnell.

During the confirmation hearing, Barrett was asked a multitude of questions by both Republican and Democratic Senators.

“Can you set aside whatever Catholic beliefs you have regarding any issue before you?” asked Senator Lindsey Graham, R-S.C.

Her Catholicism was and is still a large topic of concern, particularly among pro-choice Democrats. Pope Francis, as the leader of the Catholic Church, established the Catholic view on abortion to be against it.

Barrett answered with an impartial standpoint. “I think on that question, I’m going to invoke Justice Kagan’s description which I think is perfectly put. When she was in her confirmation hearing, she said that she’s not going to grade precedent or give it a thumbs-up or a thumbs-down,” said Barrett. “It would be wrong for me to do that as a sitting judge. If I express a view on a precedent one way or another, whether I say I love it or I hate it, it signals to litigants that I might tilt one way or another in an impending case.”

CONFIRMED: Amy Coney Barrett will be the 115th Associate Justice of the Supreme Court! pic.twitter.com/wHqTGMXTDD

“She is unfit to serve as an associate justice of the Supreme Court,” says Catie Curtis (‘22). “In 2016, she stated that transgender people should not be supported under Title IX.” Title IX is a federal law passed in 1972 that strictly prohibits discrimination on the basis of sex in education or federally-funded activities.

Curtis is referring to a speech Barrett gave in 2016 where she said, “Maybe things have changed so that we should change Title IX, maybe those arguing in favor of this kind of transgender bathroom access are right. That’s a public policy debate to have. But it does seem to strain the text of the statute to say that Title IX demands it.”

Adele Politz, a sophomore, says, “I think Amy Coney Barrett is an excellent fit for the Supreme Court because she is extremely well educated and will fill the spot of RBG seamlessly.”

“I don’t think that ACB was the right choice to be put on the Supreme Court,” says Anna Reins, a junior. “She refuses to acknowledge that global warming is a pressing issue and has written previous statements that don’t support the ACA (Affordable Care Act).”

“I think her nomination is a big step… for women in politics especially with Barrett being in such a powerful position. I think she is qualified and has experience,” says Cassie Hiatt (‘22). “The only concern I have is that, because the process went by so fast, is that there could’ve been another woman who would’ve been a better fit for the court.”