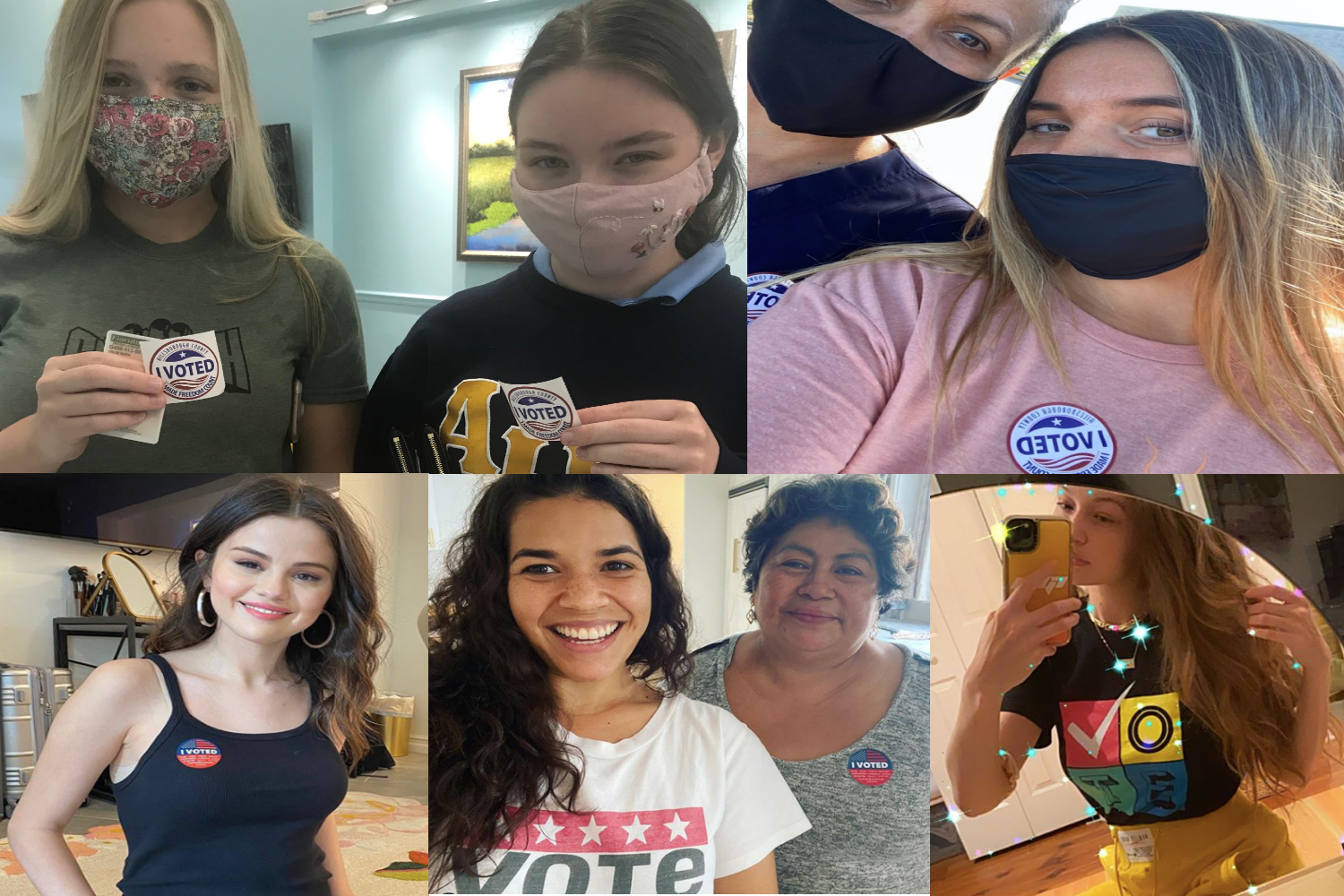 Among the 37 member countries a part of the Organisation for Economic Co-opertaion and Development (OECD), the U.S. trails behind others in terms of voter turnout. For example, Belgium’s voter turnout in 2014 was 87.21 percent (with 89.37 percent of registered voters) compared to the U.S.’s 55.70 percent in 2016 (with 86.80 percent of registered voters). ((Photo Credit: Adriana James-Rodil/Piktochart/Achona Online))

Among the 37 member countries a part of the Organisation for Economic Co-opertaion and Development (OECD), the U.S. trails behind others in terms of voter turnout. For example, Belgium’s voter turnout in 2014 was 87.21 percent (with 89.37 percent of registered voters) compared to the U.S.’s 55.70 percent in 2016 (with 86.80 percent of registered voters).

The Death of Bipartisanship in the Wake of the 2020 Election

Nov. 3, 2020, is Election Day, and despite that (as of October 30) 85 million Americans have voted early either at an in-person voting station or absentee ballot — in part due to the pandemic — Advanced Placement and Government students at the Academy are working to increase voter turnout while also exposing the inequalities intertwined with both participation and knowledge about elections as a part of their Cast Fire Civic Engagement Project.

AP Government Student Natalie Gillis (’21) said, “The Cast Fire project is what we are working on in AP Government to work on inequalities in areas such as the census, election, and more to live out the values of the Sisters of the Holy Names of Jesus and Mary. I am a first time voter, and I was very excited to vote. I went early to vote with my mom at the Jann Platt Library on October 30. The line was pretty long but coming out of there made me realize how much my voice actually matters.”

This project is very fitting as not only was voter turnout low for the 2016 Presidential Election, but since then, political polarization has increased throughout the nation. According to NPR, “only about 6 in 10 people eligible voters cast ballots in 2016” which equates to a 55.70 percent nationwide voter-turnout. In addition, Pew Research Center reports ideological differences between the two major parties has increased between 1994 and 2017, meaning there is less of an overlap regarding key issues such as government regulation of business and immigration.

The Cause and Prevalence of Polarization in American Society

This demonstrates a growing partisanship divide, as since 1994 less Americans possess a mix of conservative and liberal views which has not only affected American politics, but American society as a whole.

However, the question remains: what is driving the increase of polarization in the U.S.? The Government Affairs Institute at Georgetown University argues that although gerrymandering, sorting, PACs, and more play factors in this, their effects are minute — and rather, it is Congress itself that is the cause. It states “the modern legislative process accounts for over 70-percent of measured voting polarization in the House and 60-percent of measured voting polarization in the Senate” due to “a combination of procedural organization and political incentives.” For example, party leaders control proceedings. In the case of the Speaker of the House, for example, he or she decides the floor schedule, amendments, debates, and appoints the Rules Committee. The Rules Committee is very important as it decides “which bills are considered on the floor, which amendments are in order, and the terms of debate.” If the Speaker disagrees with the actions of Rules members, he or she can replace them. As a result, “scheduling votes is often a partisan act.”

Since the ideological and geographical separation of congressional parties as of the 1970s, the public has seen time again gridlock in Congress, most recently concerning the coronavirus relief package and police violence. As a result, the Government Affairs Institute points out, votes conducted are often for the purpose of further differentiating between the two parties and making the opposition “look bad” — therefore perpetuating polarization which has been reflected in the electorate.

As Gallup states, “personal partisan identity affects one’s views on a wide range of policy issues,” so as Congress continues to distance the line between Democrats and Republicans, so do individuals. However, this is not only prevalent among individuals’s opinions on political issues, but has trickled down to personal ones as well — therefore furthering the divide and animosity among Americans as many find it difficult to relate to those of an opposing party.

This growing hostility is even prevalent among Academy students where friend groups share similar political ideologies and those with opposing views often clash with one another.

“I do feel that a majority of Academy friend groups do consist of people with similar views, but there’s also definitely those few outliers in a couple of the groups that have slightly different views or completely different views and others. I’ve also definitely seen many arguments across the board in every single grade level between people who disagree because they don’t want to see the other side, so they just scream and yell at the other person. However, I feel like that happened more in years past, and less so this year, which is a bit shocking because it’s an election year. Overall, if you were to look at the Academy as a whole, most people get along, even if they have differing views on politics, but there are definitely some disputes,” said AP Government Student Grace Cronen.

And those who are friends with students of opposing views, topics surrounding politics are not brought up as to avoid an argument/disagreement as AP Government Student Adrianna Vargas describes. She said, “For me, sometimes I try to avoid political discussions [with some people] because I feel like some discussions can’t be had at this level right now or some people aren’t prepared for a discussion. Sometimes you just have to keep your mouth shut, and at the same time, take into account the other person’s position or opinion and compare it to yours and see do we think alike on this or do we think differently.”

Similarly, the increase in polarization has been given more of a spotlight as celebrities endorse candidates and encourage people to vote as the election begins to near.

And while celebrities like Selena Gomez urge people to vote by sharing that she had not voted prior to the 2020 election, many have also pledged their support for Joe Biden such as Taylor Swift, Cardi B, Tom Hanks, and more while stars such as Conor McGregor, Stephen Baldwin, Kid Rock, and more support President Donald Trump.

However, many have received backlash for either supporting Biden or Trump. For example, after Rapper Lil Wayne posted a picture of him and Trump on Twitter on Thursday, Oct. 29, 2020, he received criticism “from fans and fellow artists” alike as the New York Times reports. In addition, prior to Swift’s 2018 Senate endorsement of Democratic Former Governor of Tennessee Phil Bredesen, she stated her hesitancy to be politically active because she did not want to isolate her fan-base. Her endorsement prompted Trump to say, “I like Taylor’s music about 25% less now.” These two examples demonstrate a lack of understanding, middle-ground and the power one’s party identification has on the American public which reeps into personal life and influences how an individual views another — positive if he or she shares similar views or negative if the opposite.

However, students such as Kathleen Thomas (’21) contradict the current norm/polarized climate. Thomas said, “I personally will not change opinions on celebrities based on their political beliefs, even if they align with mine. I know everyone has different opinions and that’s totally human! That would be like disassociating with someone because they prefer the color pink over blue.”

Now, she’s doing everything she can to help young people see the power in the voice.

How to Stop Polarization

According to data from Nominal Three-step Estimation (NOMINATE), Associate professor of Political Science and Public Policy at USC said, “Partisan elites in the U.S. are as polarized today as they were around the time of the Civil War.”

“Polarization in America: two possible futures,” published in the Elsevier Public Health Emergency Collection, gives two outcomes of what could become of the U.S. The first is that polarization will continue to increase and the second being that it is at its climax as a result of growing contempt over its consequences. What is the most probable future? The authors, Gordon Heltzel and Kristin Laurin, conclude both may be occurring simultaneously, and the future that triumphs is dependent on “whether political and media institutions are able [to] combat misperceptions of polarization.”

However, in order to completely solve this issue, individuals are also responsible for halting this progression. The following are a few examples of how to do so, as provided by USA Today: “Make social media kinder; Downplay the fringes and highlight the median; Emphasize disagreement within parties; Avoid repeating misinformation.”

In the end, although polarization is a central topic, efforts to combat it are just as prevalent. For instance, Actor-Director Chris Evans and Mark Kassen and Entrepreneur Joe Kiani, created A Starting Point which was released in July 2020. The website features politicians from both parties who debate and voice their opinions on a wide range of topics in order to provide an outline for people to understand issues “without a partisan spin,” as The Washington Post reports.

Watch the full ‘Making of A Starting Point’ at https://t.co/bwhk5OwlVa
You can also register to vote while you’re there! I’m proud of this site and I hope you find it useful. Make sure your voice is heard. YOUR VOTE MATTERS!! pic.twitter.com/6E89mXU5cb

In the end, look past the polarization that has clouded American society for years and look at all sides of an issue before formulating an opinion, which transcends to voting as well.

Economics and Elections Teacher Beth Chase said,”I always vote for the best candidate; that’s why I’m a registered independent. I always think that you have to put America First. It doesn’t matter what party you belong to. You have to put the people of the United States first — above all, above everything.”