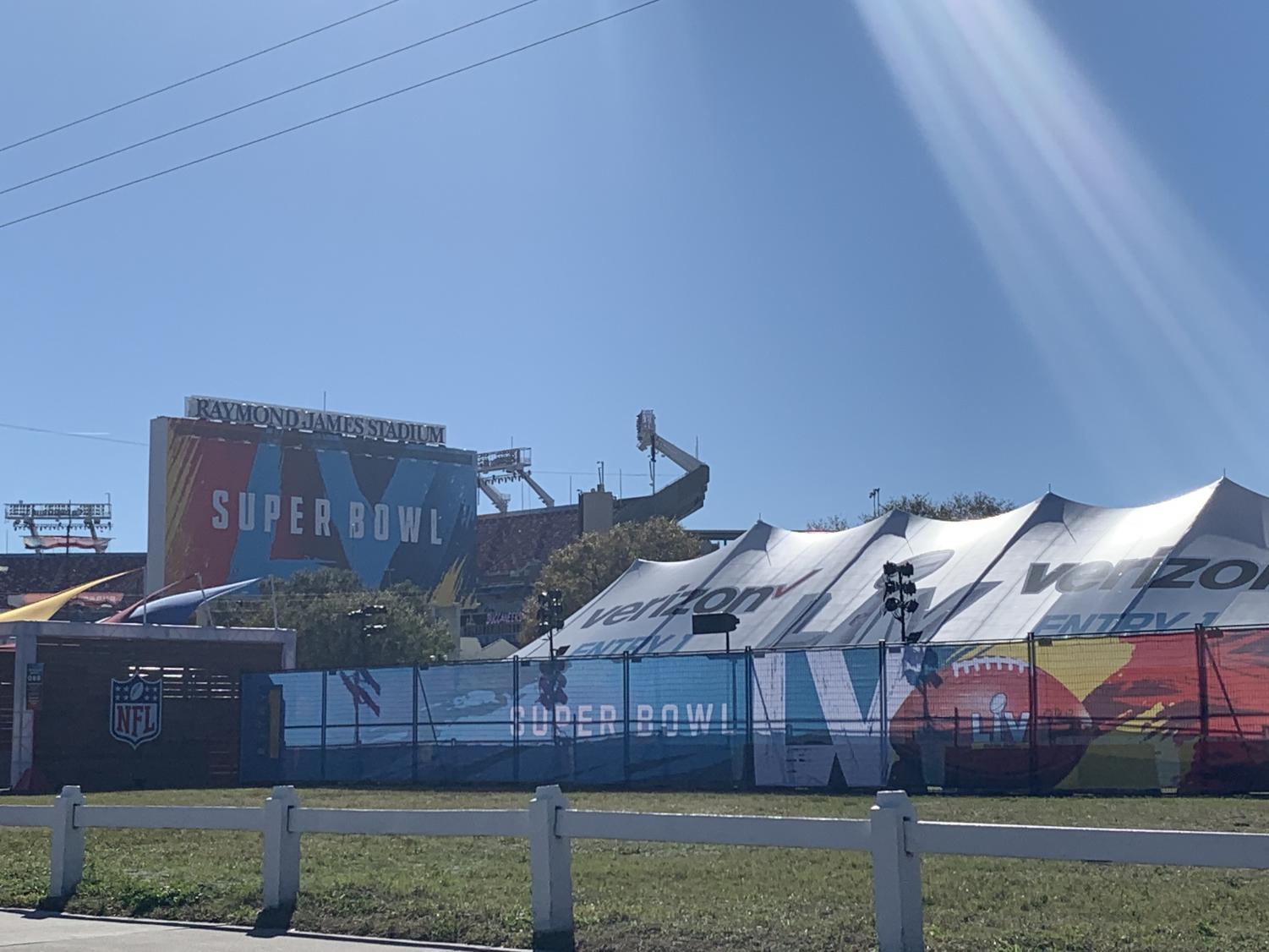 “I was so excited the game was in Tampa. I could hear the jets flying over the stadium from my house. Winning the Stanley cup and the Super Bowl makes Tampa a double threat,” said Audrey Smyth (‘22). ((Photo Credit: Emara Saez/Achona Online))

“I was so excited the game was in Tampa. I could hear the jets flying over the stadium from my house. Winning the Stanley cup and the Super Bowl makes Tampa a double threat,” said Audrey Smyth (‘22).

On Sunday, Feb. 7, the fifty-fifth Super Bowl was hosted at Raymond James Stadium in Tampa, FL. The well-anticipated game was against the Kansas City Chiefs and Tampa’s home team, the Tampa Bay Buccaneers, who made history as the first team to play the Super Bowl in their own home stadium.

The Tampa Bay Buccaneers were the Super Bowl LV champions after defeating the Kansas City Chiefs 31-9. This was the Bucs second Super Bowl win which made them the first team to win a Super Bowl in their home stadium.

“My favorite moment of the game was when Gronk scored the first touchdown because it gave the Bucs the lead and it felt like they were in control from that moment. I was so excited the game was in Tampa, and that the winners were from Tampa, as it really got everyone excited and made it feel more personal. I feel like it will drive in some new income to Tampa from tourist money and celebrations,” said Brynn Wilary (‘23).

Despite its capacity of 75,000, the Raymond James Stadium was far from full. Due to COVID-19, Mayor Jane Castor allowed only 22,000 spectators to attend the Super Bowl, which included 7,500 health workers. Face masks were required for those attending the game and for travelers passing through Tampa International Airport. Social distancing and other safety measures were implemented to keep attendees safe.

To further the safety measures, Castor also signed an order to mandate the use of face coverings outdoors in areas for events tied to the Super Bowl. It will be difficult to tell if these precautions were enough to prevent a spike in COVID-19 cases; the effects on COVID-19 cases in the Tampa Bay area because of the Super Bowl will likely be felt in the coming weeks.

The Weeknd performed at the halftime show for the Super Bowl. He also spent $7 million of his own money to produce the performance. Notably, he was a solo performer. He played several of his hits like “After Hours,” “Can’t Feel My Face,” and “Blinding Lights.” As usual, Twitter and other social media users were quick to make memes of the performance.

Academy students were given Monday, Feb. 8, off to recover from the long night of watching the game. Students were also allowed to wear Buccaneers gear on Friday before the game.

“I was in the comfort of my home eating our good luck game day meal that we’ve eaten for the last four Bucs games. It worked! I’m glad we have off school because I imagine the city will be celebrating until the early morning,” said Learning Resource Specialist Julie Omodio-Griess.

“I was rooting for the Bucs from my house, and honestly I wasn’t really expecting to win. A highlight of the game for me was when the fan ran out on the field. I think this will bring lots of great attention towards Tampa and hopefully attract more tourism,” said Paige Gonzalez (‘23).

Community greening projects, a Salute to Service event at MacDill Air Force Base, a virtual NFL PLAY 60 Kids Day, and “Huddle to Tackle Hunger” to combat food insecurity in the region are some examples. The NFL Foundation also made a $250,000 donation to assist in supporting local restaurants and provide meals to those in need most, which will run for 44 weeks following Super Bowl LV.

A $2 million investment was also made by the NFL Foundation and the Tampa Bay Super Bowl LV Host Committee as part of the “Forever 55” social legacy initiative, which will focus on six pillars: early childhood education, food insecurity, families, health and wellness, sustainability and systemic justice.

Leading up to the Super Bowl, the NFL will conducted volunteer events at domestic violence shelters and sexual assault survivor organizations, like The Spring of Tampa Bay and the Crisis Center of Tampa Bay. The NFL also worked with the Hillsborough County Commission on Human Trafficking and the Tampa Hillsborough Homeless Initiative to providing financial grants to address those issues in Tampa. Super Bowl events are usually the most prominent national event where sex trafficking flourishes, so these initiatives will help counter that.

Along with these events, the Super Bowl likely brought economic stimulus to the Tampa Bay area despite COVID-19. The usual profit generated for a Super Bowl host region is somewhere between $300 million and $500 million, but it will likely be much less for the Tampa Bay area due to decreased tourist activity, nearly empty hotels, fewer game day tickets sold, and many other factors that would contribute to profits being impacted by COVID-19.

All of Tampa Bay felt the impact of the historic Buccaneers win, and celebrations will likely take place all week. Despite many maskless crowds in Ybor City, SoHo, and Channelside celebrating right after the Super Bowl win, Castor is determined that celebrations can still take place safely. According to Castor, official celebration planning with the Buccaneers is underway and more details should become available on Tuesday or Wednesday.

The win evidently meant a lot for many loyal Buccaneers fans that had been waiting for another Super Bowl win since 2002. As celebrations continue, Floridians must keep following safety precautions to ensure that the celebrations do not turn deadly by causing an uptick in cases; it is likely that Florida will be seeing the positive and negative ramifications of the win for weeks to come.