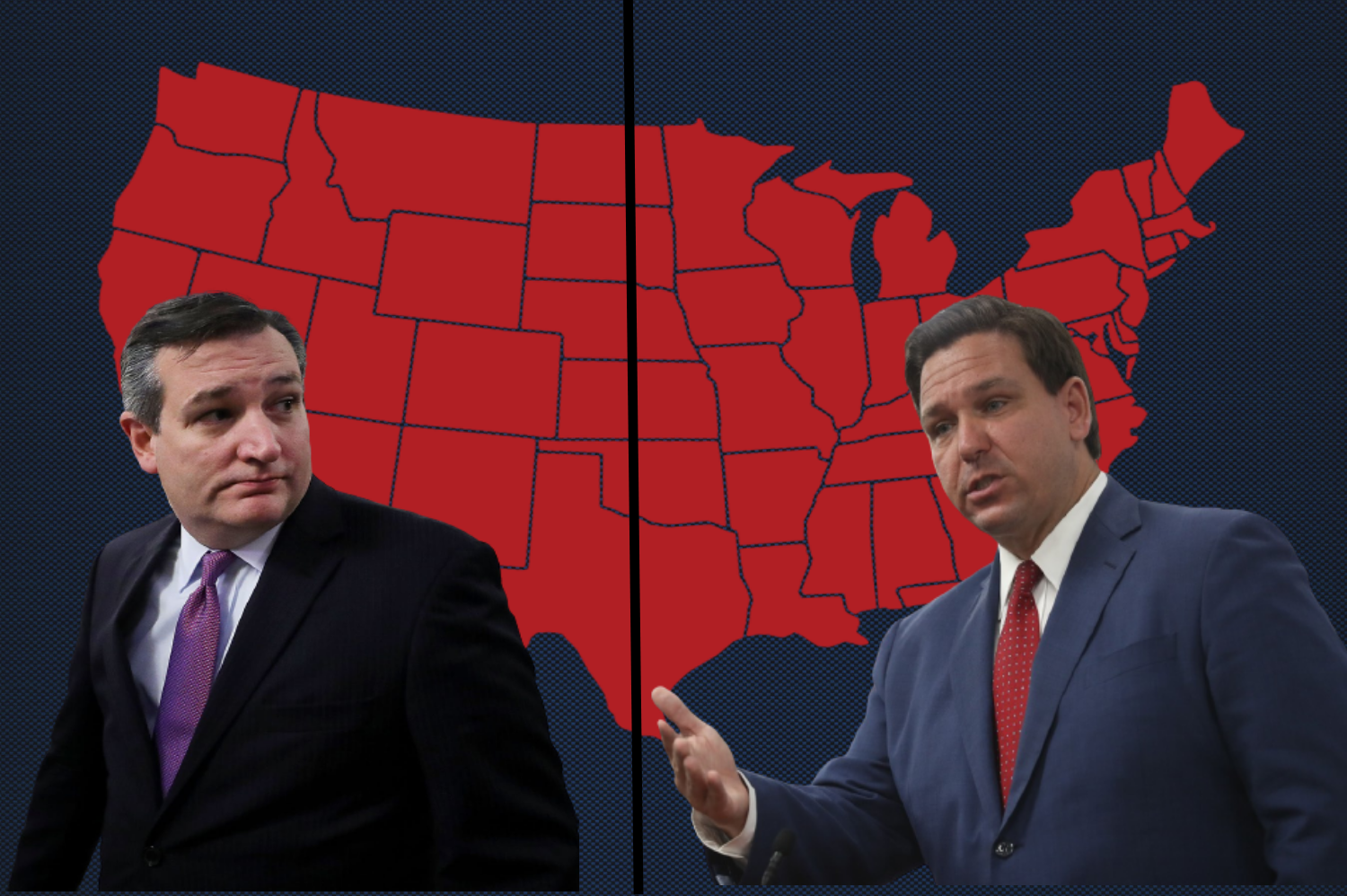 Governor Ron DeSantis will go up for reelection on Nov. 8, 2022.

Politicians Cruz and DeSantis Face Backlash Over Their Actions

One crisis after another has hit Texas in the past few weeks, with the unexpected snow, electrical blackouts, loss of potable water, and in some cases, burst pipes. Loss of electricity forced Texans to hunker down in blankets to keep warm. Three million residents had no power or electricity in their homes, and over 20 people have died.

This unprecedented winter storm left all 254 counties in the state affected by the bitter cold. Icy roads have also contributed to widespread closures and road accidents. Cities have opened emergency shelters to help people cope with the dangerous temperatures.

Despite all of the awfulness happening in the state, Texas Senator Ted Cruz thought it was appropriate to take a trip down to Cancun with his family. The senator was pictured by many media outlets and the internet in the airport as he traveled out of the country with his family. Meanwhile, hundreds of thousands of Texans were still grappling with the fallout of a winter storm that crippled the state’s power grid.

The senator’s trip drew criticism from both parties and was seen as potentially damaging to his reputation. Cruz, a Republican, released a statement saying he had flown to Mexico “To be a good dad.” His daughters had asked for a trip, and him being the great dad he is, decided to provide one. He claimed the trip was not for him, as he intended to drop off his daughters and return to Texas.

However, group text messages between Cruz and his wife Heidi were leaked on Wednesday, Feb. 24, that revealed the opposite was true; it was a hastily planned family trip, not just a trip for his daughters.  In the leaked text messages, Heidi proposed a getaway until Sunday. She invited others to join them at the Ritz-Carlton in Cancún, where they had stayed “many times.”

Ted Cruz @SenTedCruz fled his constituents in a snow storm for Cancun and doesn’t support a $15 minimum wage. He literally abandoned the working class. https://t.co/ZInxI5l0kF

Ted Cruz isn’t the only politician in the limelight for his actions. Another politician recently in the spotlight is Florida’s Governor Ron Desantis.

U.S. Representative Charlie Crist. a former Florida governor and attorney general, has requested that the U.S. Department of Justice investigate concerns over favoritism shown in Gov. Ron DeSantis’ vaccine distribution in Manatee County. He requested that the Department of Justice investigate reports that claim DeSantis has established vaccination sites “in select locations to benefit political allies and donors, over the needs of higher-risk communities and existing county waitlists.”

This action is contradicting to his initial statements where he said that the priority would be to ensure the extra dosages would be received by teachers, police officers, and those who are age 50 and older.

The state of Florida is one of the few states that has not been clear about who would be the first to receive the vaccine. Governor de Santis has said people over the age of 65, teachers over 60, and law enforcement were a priority, but not much else has been specified.

Julia Lombardi (23) said, “ DeSantis has always seemed to do things behind people’s backs, he never took much charge of the pandemic or spoke too seriously on it. Now with the vaccines, it’s troubling that he’s not as transparent as he should be.”

Other groups such as essential workers and citizens with underlying conditions who are younger than 65, deemed as a priority by U.S Centers for Disease Control and Prevention, are still waiting on the shot.

She mentioned that ever since these have been established, DeSantis’s campaign has raised more than 2.7 million dollars in the month of February alone.

Isabella Duarte (21) said, “A lot of politicians such as DeSantis take advantage of their position to benefit themselves and their circle when their intentions should be to help the most vulnerable. Ted Cruz’s action was callous and irresponsible, especially with the extreme situation happening in Texas. My only hope is that one-day politicians will be able to understand that their jobs are there to help the communities they are responsible for and do not use their positions for their own benefit.”