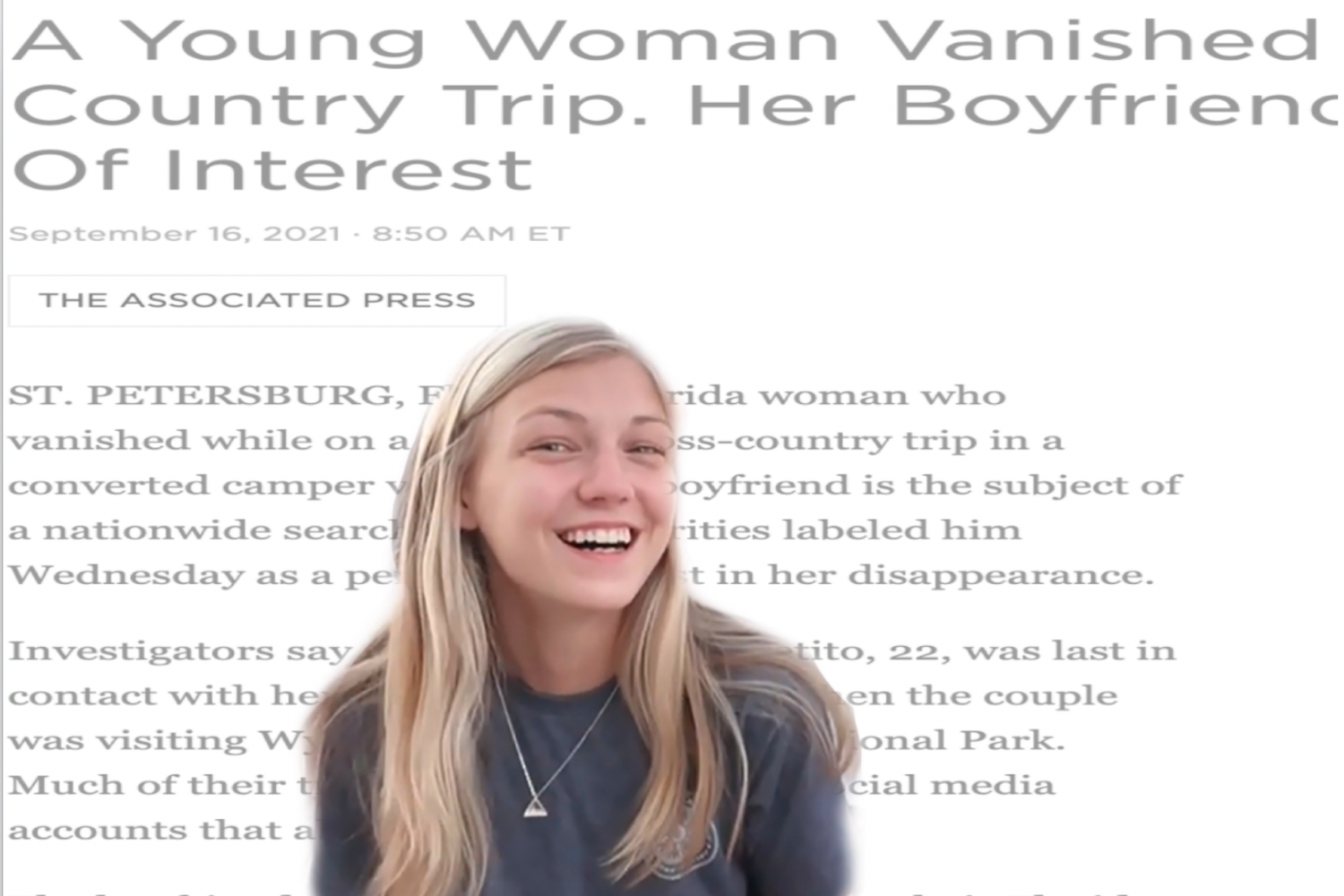 Gabrielle “Gabby” Petito was reported missing on Sept 11, after her fiancè, Brian Laundrie, returned to his home in Florida without her. Petito and Laundrie had been traveling the country in a white van, documenting it all on Youtube and Instagram when things started to take a turn for the worst. Police reports from a few weeks ago suggest aggression and tension between the two, but there was insufficient evidence to justify any charges. With Laundrie on the run, officials search for him and more clues about the specific cause of Petito’s death.

Florida resident Gabby Petito went missing during a road trip with her fiancé, who is now a person of interest in the case, police said https://t.co/g2stXnMS79

The couple’s four-month cross-country trip began in July of this year. Petito and Laundrie decided to visit different national parks and document their experience of living in a van. On Aug 12, Petito posted a picture of herself in Moab, Utah, taken three days prior. That same day, the Moab police responded to a domestic issue after an argument Laundrie had with Petito. Both individuals claimed they loved each other and “desperately didn’t wish to see anyone charged with a crime,” police reports revealed.

Jill Ledwon (’22) said, “I don’t think the media gives enough attention to domestic violence. It’s an issue that affects so many people and will continue to affect people unless we recognize the problem and take action to fix it.”

Questions are being raised as to whether Petito’s death resulted from domestic abuse issues between the couple. Unfortunately, domestic violence is a common occurrence in the United States. According to the Centers for Disease Control and Prevention, one in four women has experienced violence from a partner. Additionally, over half of female homicide victims are killed by former or current intimate male partners.

Domestic abuse groups are hoping the Petito investigation will spark a serious conversation about the importance and signs of domestic violence. Abuse charges continue to climb in the United States and the media doesn’t give these cases the credit they deserve because domestic violence is often seen as a private matter that shouldn’t be discussed with the world.

In the wake of what is presumed to be Gabby Petito’s body found in Grand Teton National Park, this is a reminder that at least 3 women are murdered EVERY day in the US by their spouses or intimate partners.https://t.co/m1oT37z1DT

Over the years, researchers have studied the reasons why victims don’t leave their abusers. These reasons include lack of family support, financial need, and the absence of help from law enforcement. Victims are motivated by empty promises regarding change, love, and support from their abusers.

“It’s truly awful what happened to Gabby Petito. Domestic violence should be an issue that is talked about more in the media,” Sophia Moore (‘24).

On Aug 24, Petito told her mother, Nicole Schmidt, that she and Laundrie were leaving Utah and headed to Grand Teton National Park in Wyoming. Schmidt received a text reading, “No service in Yosemite,” on Aug 30 from Petito. Two days later, Laundrie returned to his home in Florida alone.

The police are now referring to Laundrie as “a person of interest” because he was the last person seen with Petito before he went into hiding. Currently, officials are searching for Laundrie in Carlton Reserve in North Port, Florida. Anonymous tips concerning his whereabouts flood the media and police stations; however, no significant progress has been made.

Human remains were identified as Petito’s on Sept 19, and an autopsy confirmed her death on Sept 21. According to the FBI, the “manner of death was a homicide,” but the actual cause of her death will not be identified until the final autopsy, which has yet to be scheduled.