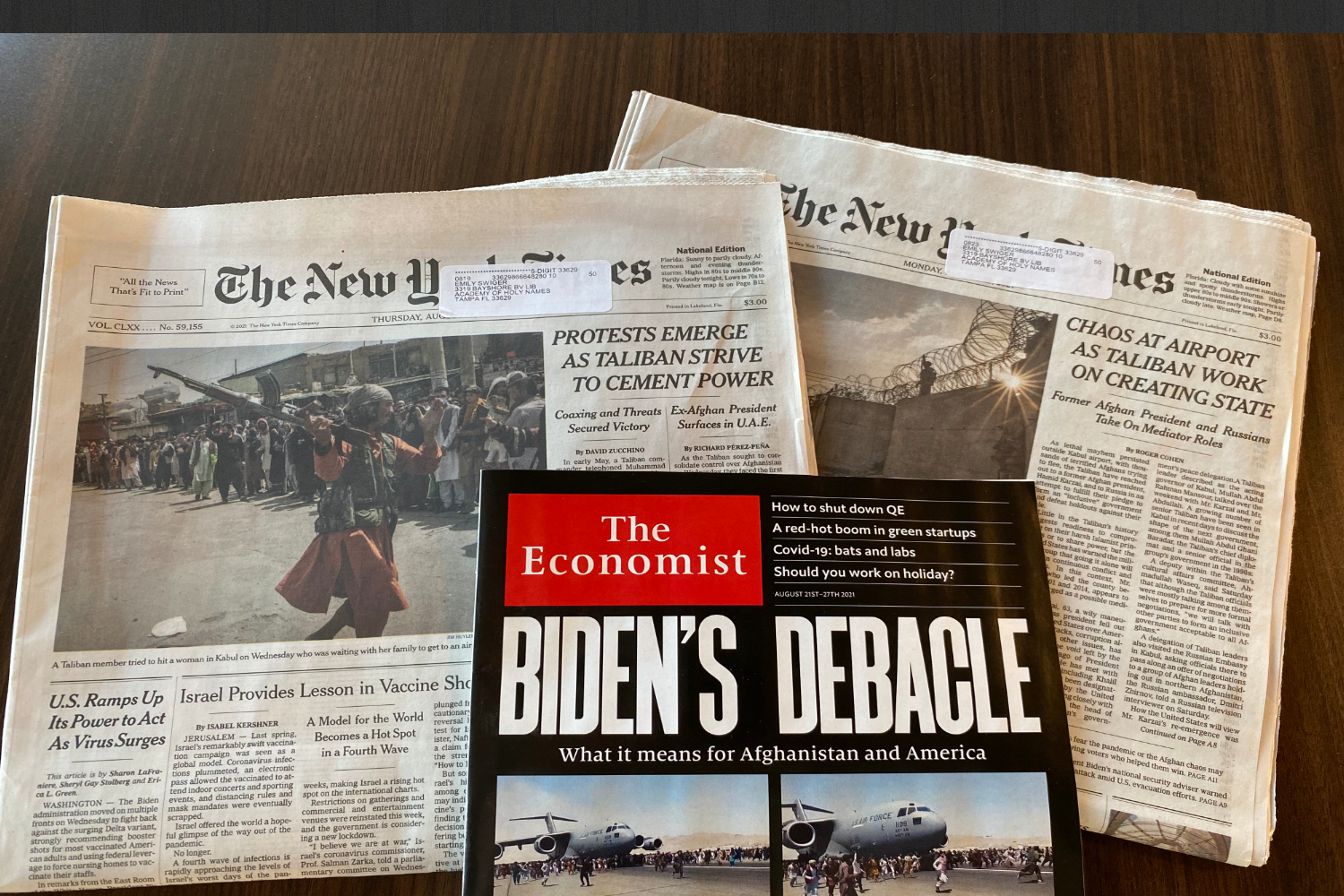 Headlines of the Afghanistan conflict have been over the newspapers all over the world. (Photo Credit: Kimberly Egoavil / Achona Online )

Headlines of the Afghanistan conflict have been over the newspapers all over the world.

On April 14, President Biden announced the withdrawal of U.S. troops from Afghanistan. This decision has led to the takeover of the country by Taliban fighters and the chaos of evacuation by Afghan refugees.

The Taliban are a group of Extremist Islamist militants that emerged in the 1990s. Their main goal and promise was to restore order and bring greater security through their strict interpretation of Islamic law. In their years of leadership, they were known for destroying religious monuments such as the Bamiyan Buddha, introducing punishments such as public executions, and enforcing strict laws of no television, music, cinema, etc. They prohibited girls over the age of 10 to attend school, and women could only go out covered from head-to-toe with a burka and accompanied by a man.

Despite the Taliban rapidly gaining territory across Afghanistan throughout the 1990s-2000s, they were never recognized as the official government by international countries.

Only when the U.S. experienced terrorism first-hand did they acknowledge the group’s threat and join the fight against the Taliban.

On September 11, 2001, the U.S, faced a terrorist attack from al-Qaeda and believed that the Taliban were hiding those responsible for the many casualties. The U.S. demanded Osama Osama Bin Laden, leader of al-Qaeda, be handed over. The Taliban refused. With aid from the British, the U.S. military began a bombing campaign which eventually forced the Taliban forces to retreat.

Nearly 20 years since the initial campaign, President Biden has decided to follow through with former President Donald Trump’s plan to withdraw the U.S. troops from the “Forever War.”

On August 15, 2021, the Afghan government collapsed as the Taliban took Kabul. Faced with the invasion, the president of Afghanistan along with security forces fled the country. Leaders of the Taliban say that they will cooperate with Afghan officials in order to have an “open, inclusive, Islamic government” with the interpretation of the Sharia law.

Stunning scene – Afghans running alongside, clinging and climbing on top of a US plane preparing for takeoff. #Afghanistan pic.twitter.com/zCKTsTQayf

The immediate humanitarian impact has been worse than anticipated. With the Taliban in control, Afghans are at risk. They are afraid that the Taliban might carry out revenge attacks against those who worked or helped the United States. The people are also afraid that the Taliban may once again return to the harsh interpretation of the Sharia law which will put women in immense danger. Especially those who were activists for women’s rights, teachers, journalists, academics, and who took on high-profile roles in government, the police, the army, and public life.

At the moment the United States is focused on the evacuation of Afghanistan refugees and U.S. personnel. More than 113,500 people have been evacuated which includes 4,500 American citizens, Afghans who have applied for visas but have not yet received them, and people who are in particular danger against the Taliban. The citizens are being screened and tested for COVID-19 and placed in different countries all over the world such as Colombia, Albania, Uganda, etc. They will be temporarily housed until the U.S. can file temporary visas and resettle them.

Not only does the United States have the task of providing shelter to Afghans who wish to leave their country, but now they must figure out a way to separate Al Qaeda and the new Afghanistan government in order to prevent terrorist attacks.

Most recently on August 26, 2021, the Kabul airport was attacked by a suicide bomber and an assault by gunmen; which left more than 100 deaths, 13 U.S. service members, and 90 Afghans.

Though these events are out of many’s control and far away, students can show interest by remaining informed. History teacher Stacy Filocco said “When looking at any current event, students should always consider what is happening now but they should also be curious of what were the events both in the recent past and in the not-so-recent past that may have laid the groundwork for what’s happening today.”

Specifically about the Afghanistan war Filocco said,  “We can look even beyond the most recent of American involvement, and consider the role that Afghanistan has played in global politics all the way back even as early as the 1800s and conflict between Russia and England.”