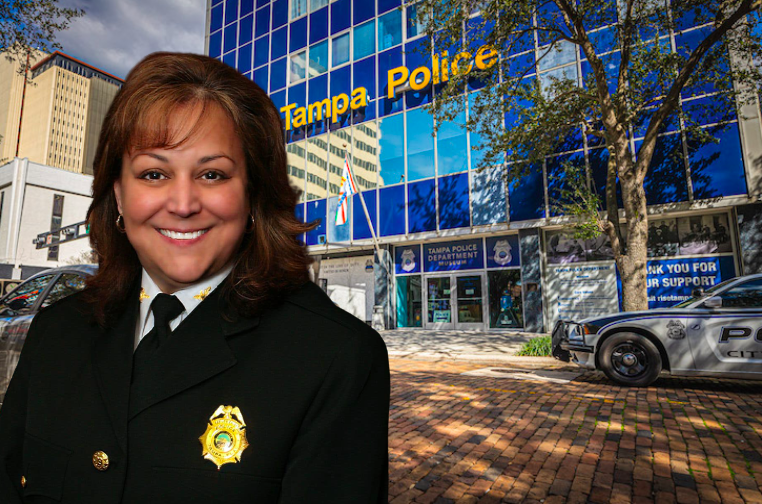 Mayor of Tampa, Jane Castor, announces her support for Mary O’Connor as the new chief of the Tampa Police Department.

In February 2022, it was announced that Tampa Mayor Jane Castor named her pick for Tampa’s new Police Chief: former Assistant Chief, Mary O’Connor. Before her retirement in 2016, O’Connor worked for the Tampa Police Department for 22 years. She also served five years as a consultant to the Department of Justice and FBI and spent five years traveling nationally to aid in the bettering of other agencies.

O’Connor is firm in her stance that growth is always possible, even as the Tampa Police Department has become the best in the country. She continues to emphasize her desire to improve community relations and take a team approach to preventing crime. It is interesting to note that despite the fact that only 9.2% of police chiefs are women, in Tampa, former police chief Castor is nominating a new female head of the department.

Thank you @TB_Chamber for inviting Chief Mary O’Connor to speak this evening and join a great group of panelists during Women’s History Month! #EmergingLeaders pic.twitter.com/SP3eJC4KmE

Despite Castor’s unyielding support for O’Connor’s new position, her appointment has been met with voiced concerns about her past. When sorting through O’Connor’s personnel file, ABC Action News found a notice of disciplinary action which described a traffic stop early in her career as a police officer. She was a passenger in a car when the driver was pulled over on suspicion of a DUI. During the stop, she got caught in an argument, which eventually landed her with a felony arrest and charges of assault on a law enforcement officer. However, documents later showed that a judge signed off on a court order to seal her records. In response to these concerns, O’Connor said that she will use what happened in her past to aid her as the Chief of Police. “I think just like the chance that was given to me 28 years ago to evaluate every respect of my own case,I look forward to doing that with the men and women of this department as well, ” said O’Connor.

Chief Mary O’Connor is ready to get to work. pic.twitter.com/SrzfnAdWTR

City Council members disclosed that calls from the community expressing disappointment in the candidate selection and the selection process flooded their inboxes.  “I’ve received a ton of communication from the community, from people that I never expected would contact me, and all but one were against the said nominee,” said Council Member Guido Maniscalco.

Specifically, frustration was expressed regarding the fact that O’Connor began to act as Chief promptly after she gained her support from the Mayor, despite not yet receiving a confirmation vote from the council.

Distress over the absence of real consideration of another top contender, Interim Chief Ruben Delgado was also a source of complaint.  The mayor held a community forum to introduce the candidates in January. The event was invitation only. Delgado was absent due to a death in his family, however, the event surged forward. Many citizens were not appreciative of the fact that the event was not postponed so that Delgado could attend.

Despite heavy backlash from the public regarding Castor’s choice, about a dozen officers who previously worked with O’Connor spoke publicly in support of her work ethic, personality, and temperament.  These were amongst the most powerful comments in her support.

Observations on the direction O’Connor takes the department are impending and will be highly indicative of the direction that law enforcement in the Tampa area goes in years to come.