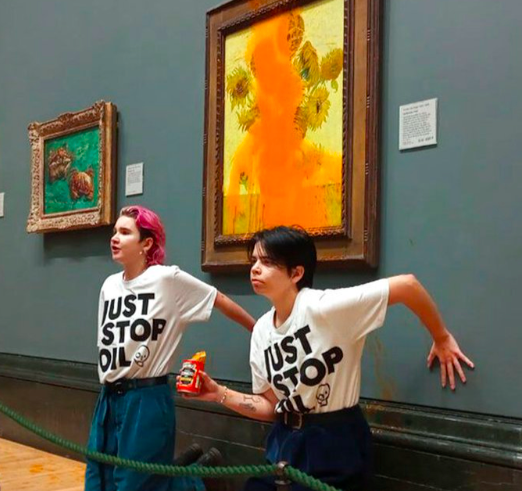 There are many forms of protest throughout the years.  Although many rely on peaceful methods, such as accumulating support in marches or petition signing within their communities, there are also many that rely on more extreme measures. Within climate change issues, notorious protesters, such as the organization “Sea Shepherd,” have taken the approach of acting out ways of protest that some may find offensive or even dangerous.

Recently across Europe, there have been several examples of famous artworks being targeting by activists, stirring up controversy about extreme tactics for protestors. Recent Climate Change protesters caught the media’s attention after attempting vandalism of famous international paintings such as Van Gogh’s “Sunflower” and Johannes Vermeer’s “Girl with Pearl earrings.” Gaining the attention of the media, many people are in an uproar about the activism, but this reaction is exactly what the protesters wanted.

Identified as Phoebe Plummer and Anna Holland, the obstructionists are affiliated with the organization “Just Stop Oil”, as seen on their shirts, which promote pronounced acts of gaining recognition to get higher power officials to deal with the current and approaching hazards of climate change. The “Just Stop Oil” website states that it is ” an environmental activist group in the United Kingdom using civil resistance and direct action with the aim of ensuring the British government commits to halting new fossil fuel licensing and production.”

Watch the moment two Just Stop Oil protesters threw the soup and then glued themselves to the gallery wall 👇https://t.co/uf3EBDbWqK

Although the paintings have been unharmed due to security encasing, there has been a lot of backlash towards “Just Stop Oil” protesters for their failed endeavor. Kyla Monts (12) comments on the recent activism stating, “I agree that climate change is a very pressing issue. I do not feel like this was the most appropriate way to get their point across, though. Van Gogh’s paintings are an international treasure and this protest could have been executed in a way that didn’t disrespect his hard work as an artist.”

As climate change is a very important issue, many demonstrators are trying to gain the notice needed to make a change. Even in what is considered dramatic acts such as “Just Stop Oil’s” recent performances, it has been used to get the resources they need as quickly as possible.

From the highlighted protesting, it has been reported that the “Just Stop Oil” activists continue to demonstrate, recently going even more extreme as they glued themselves to the road within London to protest. Demanding the government to stop new oil and gas licenses, they seem to not worry about what the people think, as long as they get the attention and support from others for their cause.