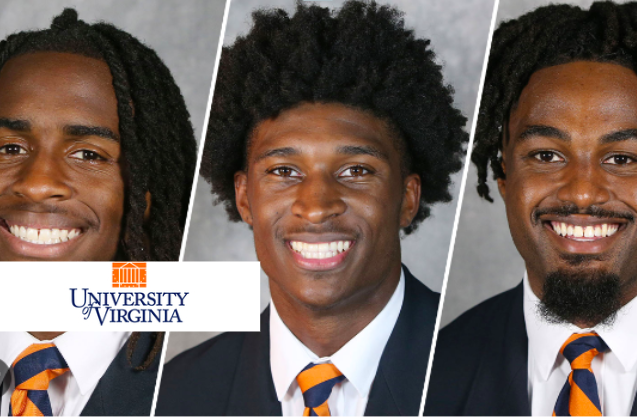 The three football players who were killed in Charlottesville, VA. ((Photo Credit: Smith Cassidy/Made with Piktochart))

The three football players who were killed in Charlottesville, VA.

This past Sunday night, the University of Virginia in Charlottesville, VA experienced a fatal shooting killing three UVA students. These three students were active players on the university’s football team. The Cavaliers’ players that lost their lives were Lavel Davis Jr., Devin Chandler, and D’Sean Perry. All three were in their early 20s. The shooting took place on campus late Sunday night, as the three players were returning from an off-campus event and going home.

After the shooting was reported, the Charlottesville police conducted a manhunt to find their suspect. On Monday, they took a former UVA football player, Christopher Darnell Jones Jr., into custody as the main suspect of the shooting. He was arrested and charged with three counts of second-degree murder and three counts of using a handgun in the commission of a felony.

Jones is also suspected to have shot other UVA students during the incident as well. Two other students were shot and hospitalized, one being a current running back for the Cavaliers football team, Mike Hollins. The other student was not identified, but they are known to be in critical condition as of November 28.

“Having an older brother who is a college athlete makes this situation so much scarier for me. People think it would never happen to them, but then incidents like this happen. It is just so sad,” said Caroline Arnold (‘24).

Jones’s father spoke with a Richmond TV station, saying he was completely shocked and in disbelief at his son’s alleged actions. He said on the broadcast, “My heart goes out to the families. I don’t know what to say, except I’m sorry, on his behalf, and I apologize.”

Since the shooting, an outpour of grief has spread throughout the Virginia campus. Classes were canceled for two days after the incident, and memorials created by students can be seen around campus. A vigil was set up by UVA’s president, Jim Ryan, where teams from many other schools came to celebrate the three lost lives in unity.

“UVA has been one of my top choices for school next year, and I visited just last month. The environment there is so amazing and I am just so sorry to hear about this happening because it truly is a very special school and one of the happiest student bodies I have ever seen,” said Maggie Smith (‘23).