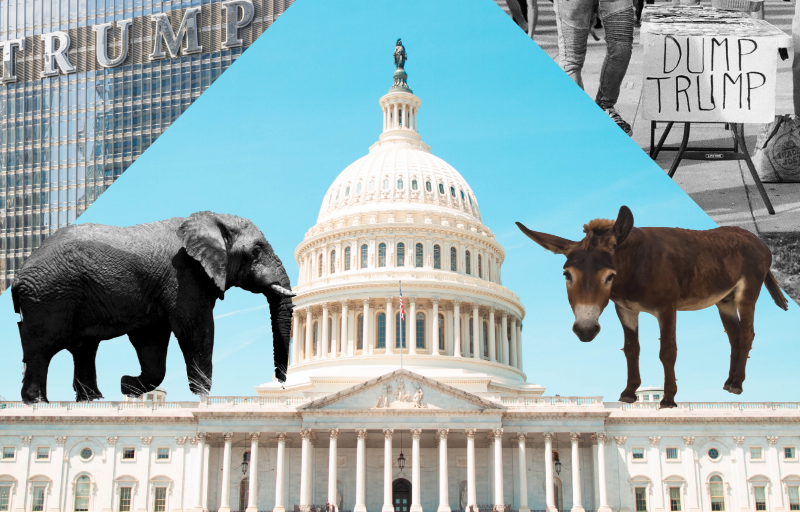 “I do not want to be labeled as a Conservative because I don’t want people to come after me” Alison Perez (’21) (Photo Credit: Kathleen Thomas/ Achona Online- Piktochart )

It’s Okay to be Conservative (OPINION)

Among lots of people, especially high schoolers, there tends to be a negative connotation surrounding the Republican party and their ideals. Possibly deriving from the association with the President’s overwhelmingly negative media coverage, as well as negative connotations regarding this party, Conservatives tend to receive less representation in student bodies and feel the need to conceal their opinions regarding politics.

Before diving into the differences between the parties and their platforms, it is important to view Conservatives as members of the Republican party, not necessarily Trump supporters. While the president is a Republican, not every member of this party necessarily agrees with all that he has to say or believes in the same policies. People often use the two labels interchangeably and associate the same connotation with one another and that connotation is generally the word “bad”.

When I hear the term conservative, […] I think of a Trump-like connotation. I think of his questionable morals and how he is transphobic, xenophobic, and homophobic”

This common misconception convinces people that all Conservatives must also believe in the exact same policies that Trump passes, which is not always the case.

That being said, the Conservative party is built on several platforms including tradition, property rights, and preservation of institutions. Included within these platforms are their beliefs regarding pro-life, strong immigration rules, less government interference in business, lower taxes, and favor of the second amendment. These issues, specifically the regulations of guns and immigration laws, are heated debates in the media currently.

However, it is essential for one to remember that there are several different approaches to handling these issues and not everyone will agree within one party. President Trump’s method of handling immigration might not be the shared belief with all conservatives, but most conservatives do believe in the rule of law and the need to properly secure our borders and promote legal immigration.

The Liberal party bases its beliefs on individual rights, higher taxes, expanded government, regulation of guns, and looser immigration laws. As these parties are both increasingly completely opposite, they tend to have tension and conflicts between extreme members of both sides.

Very sad! We need to stand up for our rights as conservatives, or liberals will take over our country and take our freedoms away. We should be able to agree to disagree and stand by our beliefs Liberal or Conservative without being bullied into submission; either way.

While both Conservatives and Liberals tend to say pointed remarks toward one another, there are certain terms that have become attached to the parties themselves. For example, the controversial term “basket of deplorables” was coined by Hillary Clinton during a fundraiser in 2016 during her campaign, which has been parroted by many anti-Trump or anti-conservative individuals since the 2016 campaign.

To just be grossly generalistic, you could put half of Trump’s supporters into what I call the basket of deplorables. Right? They’re racist, sexist, homophobic, xenophobic – Islamophobic – you name it”

This terminology can give a horrible reputation to all members of the Conservative Party and cause people who aren’t guilty of any of these transgressions to be ashamed of their political beliefs. For a young individual, that is absolutely devastating. One should not be limited to these false titles for what they believe in if they are causing no harm to other individuals.

What causes this imbalance of Conservatives to Liberals in younger people? There are several reasons that could be responsible for this phenomenon, including the media. No matter which party one personally sides with, there is no denying that the media often presented is unbalanced. There could never be a perfect balance in media or bias, but the overwhelmingly democratic representation on the most viewed news channels speaks for itself.

The media is so biased it's ridiculous. NYT, CNN, etc all run constantly negative Trump news. Fox the opposite. It's pitiful.

Students today are heavily influenced by media, as well as teachers and Hollywood, and should be able to access more information about each party when presented with a debate or topic to discuss. However, it seems that students are more compelled to side with whatever they believe is “easier to defend” or emotionally safe, especially regarding essays and graded class discussions. Students who believe in Conservative ideals may feel less confident in expressing their beliefs in their schoolwork due to the imbalance in the information they are presented.

“I think everything students are exposed to, including all forms of media, social media, teachers, has an influence on us and it’s all we really have to base opinions off of and they’re typically very biased,” said Clare Grammig (’21)

Regardless of what one believes, this should demonstrate that one should really know what they’re dealing with before they pick a side and not be afraid to diverge from the common path. Whether you are Conservative, Liberal, in the middle, or completely neutral, remain conscientious of what people are really standing for and what might be a misconception.

*Some quotes have been edited for clarity