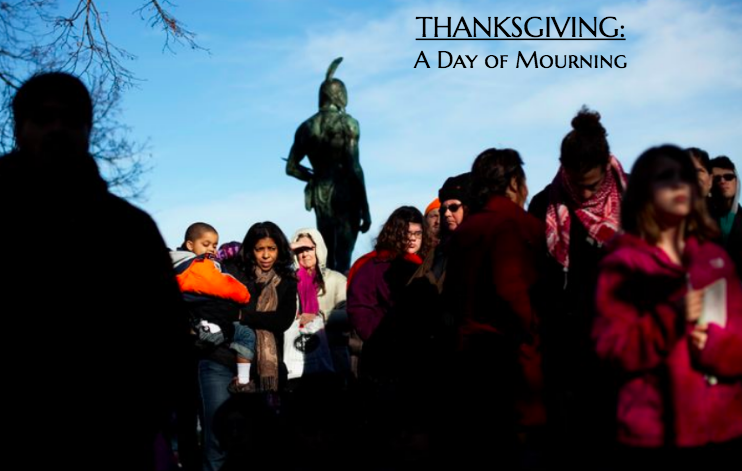 The untold stories of oppression and discrimination against Native American people are neglected during every Thanksgiving season. ((Photo Credit: Georgia Ruffolo/Achona Online))

The untold stories of oppression and discrimination against Native American people are neglected during every Thanksgiving season.

Thanksgiving: A Day of Mourning (OPINION)

Thanksgiving is as American as Chevy, baseball, and apple pie. However, the holiday closely associated with friends, family, and turkey has a much deeper and more serious meaning in respect to indigenous American tribes.

We’ve all heard, at one point or another, the grand harvest dinner between the puritans and the people of the Wampanoag tribe, which has come to be known as the very first Thanksgiving occurring in 1621. We’ve also been told the story of great camaraderie, respect, and unification of both groups and how through a mutual understanding of each other regardless of the countless differences, both were able to live in supposed harmony.

Unfortunately, this classic American tale is not entirely true. In fact, the reality is far more gruesome and bitter than the glorified oral tradition that has been passed down for nearly three hundred years. Through this false word of mouth, the conceptions of Native Americans that are learned at such a young age are inaccurate and potentially damaging.

A great read, as it’s always a good reminder to provide accurate context and avoid generalizations about indigenous peoples around this time of year. https://t.co/TR41fZRfKi

Tress Jacobs (20’) said, “To teach children one side of a story, which they then believe throughout the entirety of their lives, is essentially sugarcoating the hard truth. As a country, we are so quick to only mention our highlights and triumphs, such as winning World War I and World War II, but as soon as we talk about Native Americans and their suffering during the times of colonization, their story gets set aside away from the spotlight, which isn’t right at all since they are technically apart of American history far more than we are or ever will be.”

The truth behind Thanksgiving is far from harmonic in respect to Native American people, as the feast was found to be a communal event to celebrate the defeat of the native Wampanoag tribe after exploiting their skills and customs to better their own lifestyle, such as learning how to plow the land for a bountiful harvest, raise livestock, fish, weave, and sew. This “defeat” was carried out through the mass slaughter of nearly all men, women, and children of the multiple neighboring tribes.

Furthermore, exploitation through slavery, the mass rape of women and children, as well as the spread of diseases such as smallpox contributed to their extermination.  An estimated 72,000 to 90,000 Native American’s lived in southern New England. Within 100 years of Euporean colonization, their numbers were reduced by approximetly 80%.

The first official “Day of Thanksgiving” was recorded in November of 1637 by Massachusetts Governor  John Winthrope who did so to celebrate the safe return of English patriots from Mystic, Connecticut. There, these patriots massacred 600 members of the Pequot tribe after they had peacefully surrendered and accepted Christianity at the colonists request, and is known today as the Mystic Massacre.

Today, many people of Native American descent still participate in the customs of “Thanksgiving”, but instead view the holiday as a “Day of Mourning” over a day of gratitude. In 1990, former President George W. Bush declared the month of November National Native American Heritage Month.

Anna Warnke (‘20) said, “By our school systems romanticizing Thanksgiving and portraying the event as a peaceful gathering instead of disclosing the true and bloody origin story, we are corrupting our youth of history and fact. The media and Hollywood, as well, is to blame for the common misconception, as they are more focused on creating ideas that will sell over the reality. The fact that I had to educate myself on the horrors that were done unto Native American’s after colonization instead of learning it as part of the curriculum in school really shows that change in the American school systems needs to happen.”