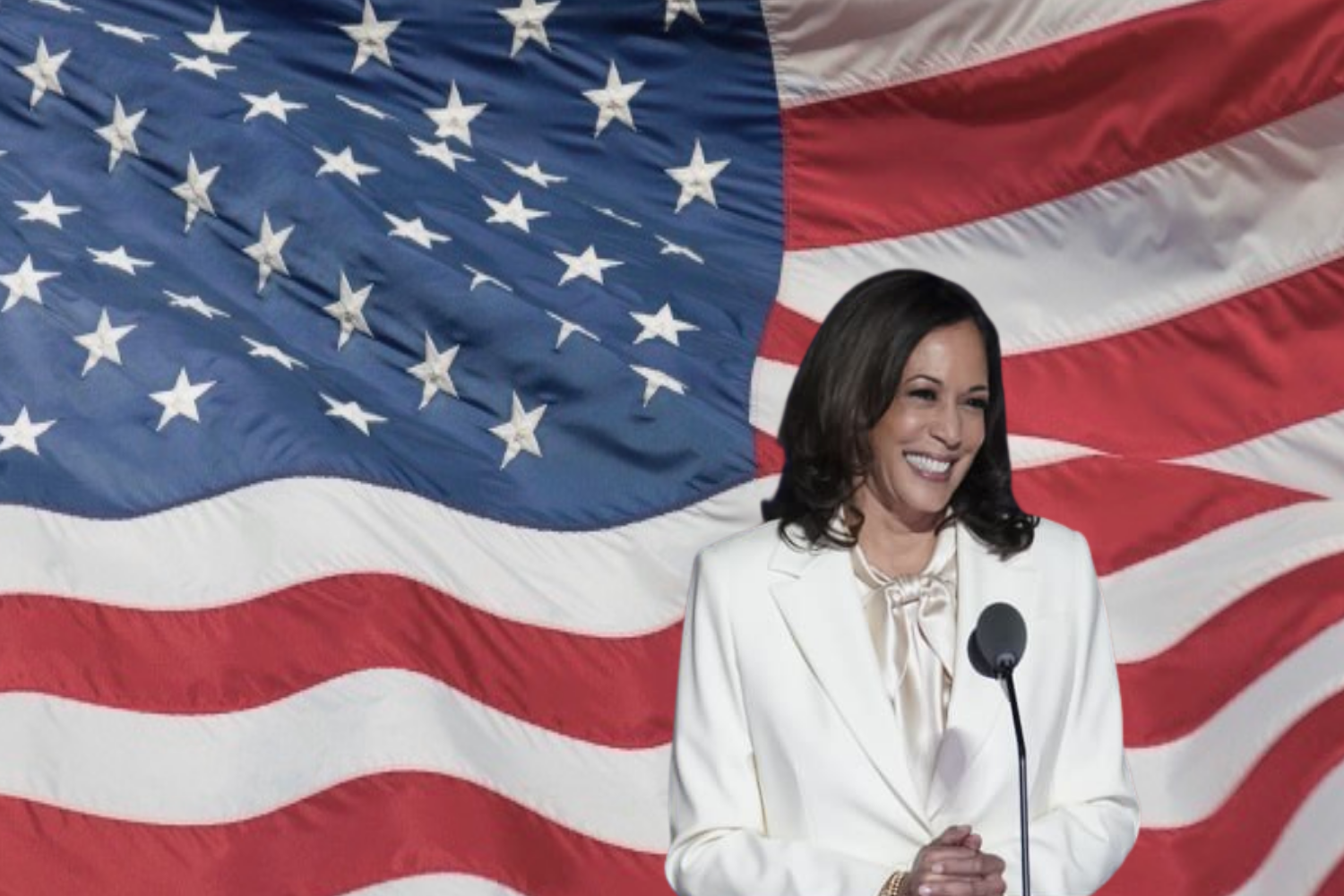 On Sept. 7, it was announced that Joe Biden won the election, and that Kamala Harris would be the first female vice president. (Photo Credit: Raquelle Elson/PiktoChart/Achona Online)

On Sept. 7, it was announced that Joe Biden won the election, and that Kamala Harris would be the first female vice president.

Why Kamala Harris Is So Polarizing (OPINION)

Ever since the announcement of her presidential campaign, Kamala Harris has been at the center  of controversy. The declaration of her victory as Vice President-Elect was bittersweet due to the lack of trust many citizens have because of her history as District Attorney of California.

Riley Rubio (‘23) said, “As a young biracial girl growing up with the dream of one day becoming the president, I was always discouraged by the fact that the majority of those who held substantial power in this country were nothing like me: white and usually male. I was four years old when Barack Obama was elected, and he was my hero. He made me believe that if I truly wanted to hold this prestigious office one day, that I didn’t need to worry about the color of my skin holding me back. With this in mind, you can imagine my devastation upon realizing that there was still one obstacle holding me back: my gender. Hillary Clinton losing in 2016 crushed me, because it made me think, ‘Well if they wouldn’t put a white woman in office, what makes you think they’d put a Black woman there?’ However, Kamala Harris being elected Vice President has given me new hope. In her victory speech, she tells the crowd: ‘While I may be the first woman in this office, I will not be the last.’ Those words above any else struck something within me, and it is because of her that I have faith in my country again.”

Vice President-Elect Harris is making history by being the first woman to be in the second highest office of the U.S. government. Aside from being the first woman, Harris is a woman of color, more specifically South Indian and Jamaican heritage. This serves as a reminder of how important representation is because women of color are underrepresented in media and the government. Regardless of how remarkable of an improvement this will be, many women of color have been less excited about her election due to her history.

The only thing that makes me happier than fact that we finally elected a woman VP is that we elected a BLACK woman! 👏👏👏👏👏@KamalaHarris

Throughout her time as D.A. of California, Harris was referred to as the “progressive prosecutor” and while many of her stances and actions attested to this, some of her actions did quite the opposite. Parts of her complex history as D.A. include sending trans women to male prisons, sending about 2,000 people for minor drug charges, fighting to block gender-affirming surgery for trans women, fighting to release fewer confirmed falsely convicted prisoners from jail, and appealing a judge’s decision that California’s death penalty was unconstitutional.

“Personally I don’t like her, everyone keeps saying that she is black but she isn’t. She doesn’t even claim her black side, and even her Jamaican father doesn’t claim her for the disgrace that she brings upon the black race. To try and clean up ‘drug dealers’ and people of such who are associated with them she locked them up—which isn’t the bad thing. The thing is that she was a part of the group agreeing to give them ridiculous sentences, and even when their sentences were up she kept them longer for free labor to ‘help’ build America. Not only that but she is racist towards black people, and that is something that I will never tolerate. I don’t look up to or respect those who wrong black people because this country was built off of the backs of our ancestors. I truly believe that she was and is the wrong person for this county, and I don’t think the black situation will get better as long as we have systematic racism ingrained in the minds of those who govern us,” said Nyonyose Varmah (‘23).

While these actions disappointed her more progressive constituents, there seems to be a lack of understanding about her job and the tough decisions she faced. As D.A, Harris’ job was to defend California’s laws. In the case of the trans women who were sent to male prisons and were denied gender alignment surgeries, that was a part of California’s law, so it was not necessarily Harris’ personal decision. This is a complex situation because as D.A. she is allowed to turn down a case, but the reasons for doing so may vary. However, this leniency stops when she voices her support in said case decisions.

i am so sorry for posting about liking kamala harris. yes she will make history with all of the “firsts” that apply to her, but other than that, i believe she has stood for horrible things in the past.

What makes Harris such a polarizing figure is that many of her actions and stances contradict things she did as D.A. For example, as a presidential candidate, Harris drew attention to her work outlawing panic defenses. Harris was very vocal about her opposition of the death penalty and she declined defending Proposition 8, which banned gay marriage.

“I feel as if Kamala Harris will be a great Vice President. However, I believe as citizens under a democracy, we must hold her accountable for her controversial past and try and prevent anything that could divide our nation more than it already is. I am hoping that she forwards our country to a better, more positive future,” said Niliyah Coney (‘21).

Another layer of nuance is added as Kamala Harris is seemingly held to a different standard because society has a tendency to expect more from women, especially women of color, and won’t allow forgiveness for their mistakes. Joe Biden himself has an uncomfortable past, but hers is brought up far more often.

What many people forget is that Harris is human, and people need to be allowed room to grow and learn. On the contrary, she is a politician so she inherently has less room for error because of the influence her actions have on real peoples lives. Her opinions indicate how she may act if that situation were to arise. This is not to excuse her past views and actions in any way, rather to acknowledge that as a politician she is bound to do something wrong. It is also important to stay properly informed because many of the prior listed actions are things her views have clearly changed on.

Kamala Harris' appointment is historic but don't ignore her problematic past https://t.co/3ri5EHgGpy

While I agree that most of the criticisms and mistrust of her past are fair, people conveniently leave out the things she’s done in an attempt to fix her past. While there is absolutely nothing she can do to reverse her actions, I can appreciate that she has made some attempts to help people. I think that the response to her election was appalling and also very surprising because people, namely white self-proclaimed allies, were reprimanding Black and Indian women for celebrating the outcome of the election. Their responses were shaming people of color for “stanning” a politician while it was painstakingly obvious they were not.

Many were simply happy for President Trump to be leaving the White House, and for a Black woman to be entering it, in her own role rather than as someone’s husband. While there are very valid reasons to dislike her and be upset at her newfound power, people were calling her evil and comparing her to Nazis, which is extreme. Criticisms of Black women always seem to heavily reflect racism and double standards, especially coming from people who claim to support the Black community.