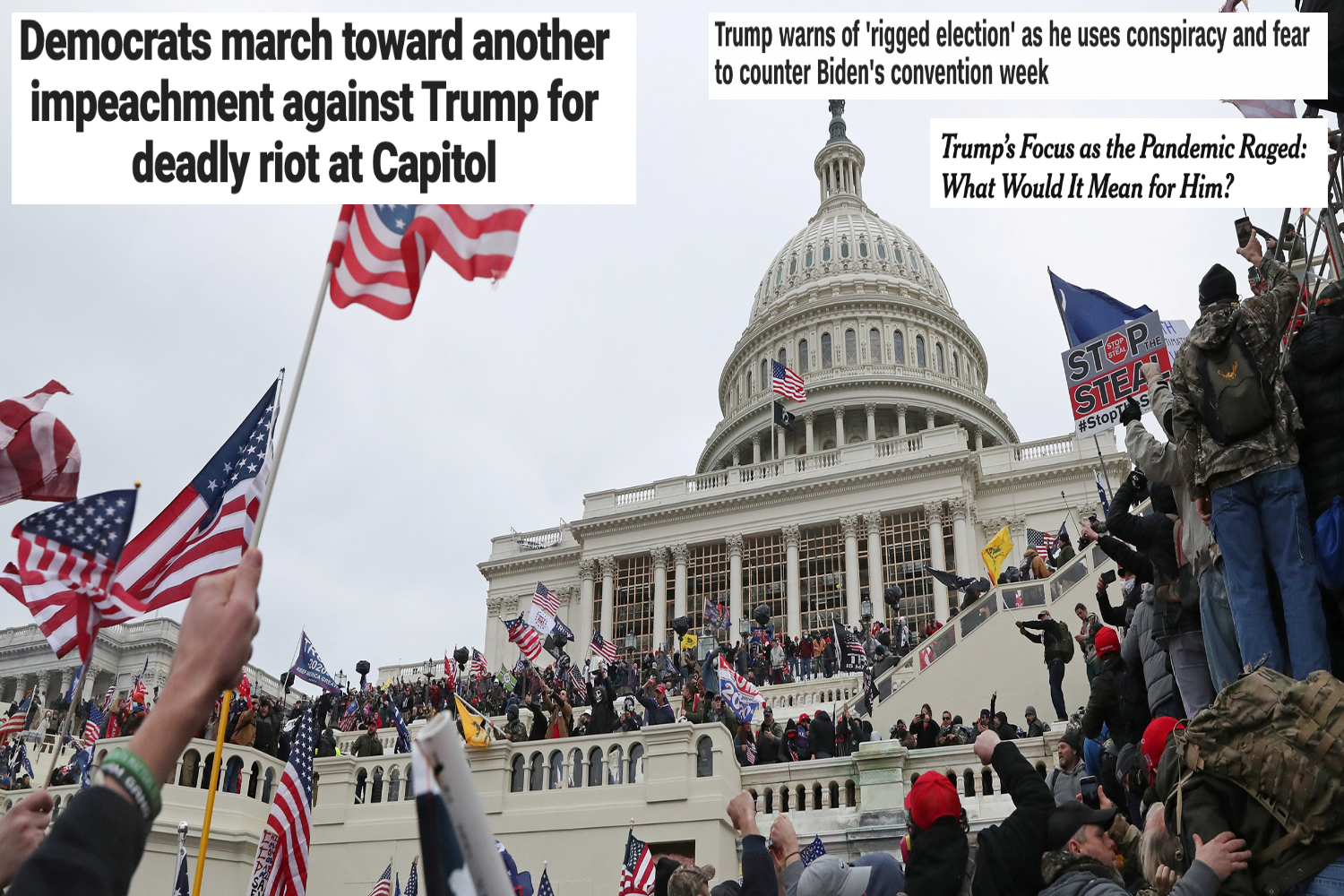 The storming of the Capitol has left people wondering how we got to this point. ((Photo Credit: Raquelle Elson/PiktoChart/Achona Online))

The storming of the Capitol has left people wondering how we got to this point.

On Jan. 6, the world witnessed an outpour of rage from Trump supporters attempting to change the election. This event that put the lives of our congress, their staff members, and the workers of the capitol, has left a lot of people wondering how did this escalate so quickly, how did we get here?

“It was one of the darkest days in American history. I don’t care what political party you belong to. That is not how we act as citizens of the United States of America. We are a country that is founded on a set of beliefs that are reflected in our Constitution, a series of laws that protects all citizens and ensures our democracy. As Thomas Paine said: ‘The president is not king. The law is king,’ ” said History teacher Beth Chase.

HARRISBURG, Pa. (AP) — In the 36 hours after last week’s deadly insurrection at the U.S. Capitol, 112 Republicans reached out to the election office in Lancaster County, Pennsylvania, to change their party registration.https://t.co/toeE3xHPcz

Over the course of the Trump presidency, news reporting has been presented less objectively. This causes news reporters’ personal opinions to get in the way of their news reporting. As Fox News deems President-Elect Biden “weak“ and “corrupt” while entertaining the claims of a “stolen election”, CNN accuses Trump of “lawlessness“ and “lying”, calling his supporters “extremists”.

The tension created by the animosity of both sides resulted in a high pressure situation that we are actively watching unfold. This use of emotional rhetoric to push an agenda, no matter the party, has elicited an emotional response from viewers, which is what was witnessed on Wednesday.

“I think the riot at the capitol was caused by total immaturity. People raided and vandalized over a political topic that they were unhappy about. Like a child throwing a tantrum because they didn’t get what they wanted. Life isn’t fair and things don’t always work out in one’s favor but this reaction was uncalled for and embarrassing for everyone involved,” said Carolyn Jacobson (‘23).

This is evident even now, a week after the event took place, as we see different news outlets refer to this event as “deadly” and “violent”. While this may not be incorrect, it is subjective, which news should not be.

Before President-Elect Biden was even declared the winner of the election, Trump spoke to his supporters about the “fraudulency” of the election, from which grew many conspiracy theories of dead people voting, missing ballots, and an overall “stolen” election. As more of Trump’s claims spread, from his tweets to speeches to the nation, which led his supporters to believe that they had lost something and they had the “right” to get it back. This claim of inequality is an appeal to emotion. Even his speech prior to the riot has been said to have intensified the rage of his audience.

The repetition of the phrase “law and order” in Trump’s tweets and speeches is often used to incite violence under the guise of keeping others in check with the law, and in this case the government itself.

History and Psychology teacher Dana Nazaretian said, “We all know if one hears a lie, in this case a ‘big lie’ [Trump won the 2020 election] often enough there is a strong possibility that one will start to believe the ‘big lie.’ Psychologically, the use of persuasion or propaganda – if an audience generally agrees with Trump, Trump can be more persuasive by presenting one-sided arguments that affirm his audience’s beliefs (think of his three-word go-to’s for example: “Lock her up”). Trump is able to spread disinformation via social media which is a form of group influence– people are persuaded to do something or to adopt a certain position because they are influenced by a group of people or by society in general. Next, there is group polarization – tendency for people to hold even more extreme views on topics after a group discussion of like-minded people. Lastly, confirmation bias – tendency to search for information that supports our preconceptions and to ignore or distort contradictory evidence – when we see others through the filter of stereotypes and prejudice.If we think of the insurrection at the Capitol, there is groupthink – a tendency to make bad decisions because of the illusion that the plan of action is a good one and is supported by all members of the group. In addition, the concept of deindividuation – the loss of identity as a result of participation in a larger group = lessens sense of personal responsibility for one’s actions and can lead to a higher degree of aggression. According to Yale professor, Timothy Snyder, ‘Trump’s big lie(s) tears at the fabric of reality; Trump has normalized lying which ultimately has thrown any mechanism or institution of democracy into doubt.’ To quote an NPR article, ‘Trump lies will support his victimhood cult into the future. The lie outlasts the liar.’ ”

This bias has been emboldened by the contrast of reactions many had to the storming of the Capitol and the Black Lives Matter (BLM) protests over the summer. While it has been proven that about 93% of the BLM protests were peaceful, many let the 7% take away from the cause that was being fought for. However, people were quick to empathize with those at the Capitol because they had been told something was taken from them, and were unable to figure out the truth. An attempt on the congress people’s lives is not excusable because of claims of a stolen election. Similarly, comparing the danger of the two does not make either excusable. Just because something is the lesser of two evils doesn’t take away from the fact that is still wrong.

“To try and compare the BLM protestors to the rioters at the Capitol is absolute lunacy. It’s literally comparing apples to oranges, because how does one say that peaceful protestors and violent insurrectionists are one in the same? Not to mention, they were “protesting” [although can we even call what happened at the Capitol protesting?] for drastically different reasons: one group is attempting to spread awareness about a legitimate issue in our country, while the others showed up to throw a temper tantrum because they lost an election. To put it simply, there is no comparison to be made here, end of story.,” said Riley Rubio (‘23).

This is not an article to excuse their actions, but rather to analyze what went wrong along the way and how we got here. This is a complex situation that should be handled delicately being that these people have shown how far they are willing to go. This was emphasized as I was writing this article. I realized how complex writing this story is, being that I have to watch the words I use to describe these situations because when we have opinions on things we have the tendency to be biased without even realizing it.