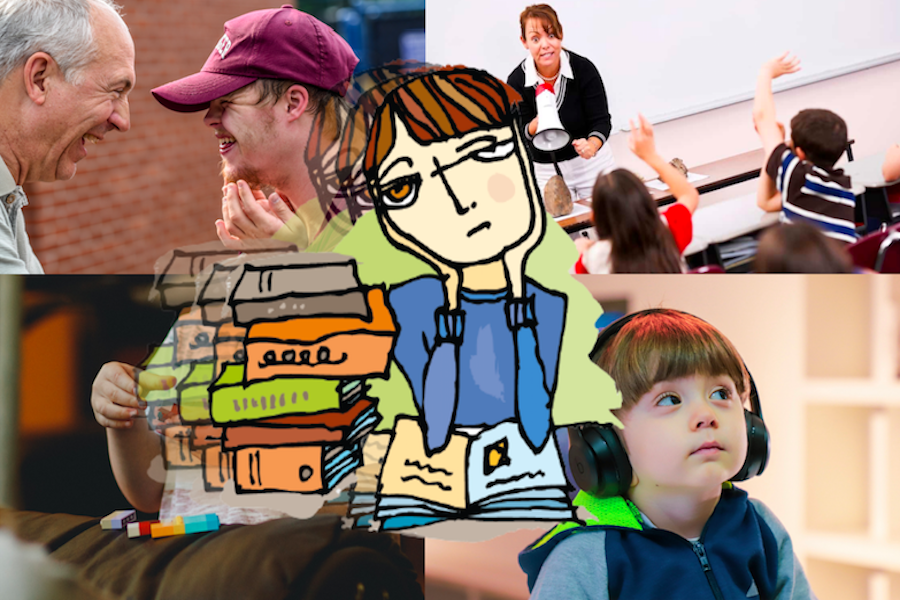 Being neurodivergent has been overlooked or misunderstood too often to be a simple mistake. ((Photo Credit: Sophia Garcia/Piktochart/Achona Online))

Being neurodivergent has been overlooked or misunderstood too often to be a simple mistake.

Being neurodivergent, individuals differing in a mental or neurological function from what is considered typical or normal, has been extremely skewed and misrepresented in media and society. Individuals with Dyslexia, Autism, ADHD, Dyspraxia and other neurological conditions often feel undermined or even infantilized, especially those with Autism. Dumbing down vocabulary, speaking slower, being excessively protective and treating people with neurological conditions is not appropriate or appreciated, as well as it being incredibly insulting when those who are neurotypical display this behavior to adults with neurodivergence.

People with Autism are repeatedly spoken over and coddled due to their disability which is extremely damaging to how Autism is viewed as in our society. Autism is a spectrum, meaning that not every Autistic person needs assistance each moment of the day. Categorizing all people on the spectrum as helpless, innocent, deserving of pity and less intelligent makes neurotypicals be patronizing and condescending to those with Autism. This mindset erases Autistic people’s voices and forms a horrible stigma onto the community which is extremely damaging.

Catie Berg (‘22) said, “I was recently diagnosed with inattentive ADHD and Auditory Processing Disorder and nobody really told how much more they affected me beyond just concentrating and learning problems. It can feel embarrassing having peers be condescending just because I didn’t process what they were saying as quickly and be marked ‘slow’.”

Personally, I struggle with ADHD on a daily basis and with this problem I have definitely noticed a difference in how I am approached by teachers and peers. Although I get the line of thinking that a person has for this, singling out or telling a student with ADHD that they act like a toddler is extremely condescending and rude. I can’t eradicate my impulsivity, concentration problems, memory issues or high energy so condemning me for displaying symptoms of my disorder doesn’t make me feel more motivated to change, instead it reminds me that I don’t have complete autonomy over my symptoms.

Although it is semi rational and understandable that parents or neurotypicals can’t fully understand symptoms as uncontrollable, what people could do to understand them is directly speak to neurodivergence and research how we function. A terrible loophole a lot of people fall under instead of this is to cite Autism Speaks, coddle neurodivergence or isolate neurodivergent people as “band kids”, “that ONE kid” or other forms of bullying.

To dive in on one of these, Autism Speaks is the most recognizable organization for Autism awareness and relations, but the organization has caused more stigmatization and harm towards actual Autistic people. The organization only spends 4% of their budget towards actually helping individuals with autism and their families with their family grants. 22% of Autism Speaks’ budget goes to fundraising efforts. Autism Speaks’ biggest goal is to research how to “end autism”, their organization prioritizes researching autism to ‘cure it’ rather than listen to actual autistic people. There does not need to be a prime focus on prenatal tests to find out if a child is autistic, there needs to be more effort put in on proper therapy and equipment that can help individuals with autism in the long run. Autism Speaks also has zero board members with autism, being one of the few disability charities that refuses to consult with an individual with the disability. The organization was so heavily criticized because of this that they added John Elder Robinson, author and autism advocate with autism, to the team and he resigned shortly due to how dehumanizing he had been treated.

Savannah Armentrout (‘22), “What I want people to change when this happens again to treat me and other people who have ADHD with empathy and educate themselves and others that ADHD is a real disability, it affects us on a day to day basis and it affects more than our academic success. ADHD can affect how we are able to take care of ourselves, our relationships, and even other serious factors of our mental health.”

Jokes about the ‘weird band kid’ have been circling around the internet recently and the truth is that these jokes are coded jabs at neurodivergent youth. Characterizing the ‘weird kid’ as obsessive over old memes (hyperfixation), socially awkward, hand flapping (stimming) and tics is a direct impersonation of a neurodivergent person. These jokes just harm and mock Autistic and ADHD individuals for showing their symptoms in public and further stigmatize these disorders. Many neurodivergent people mask, putting great effort into covering symptoms and behaving neurotypical, as a result which can be really straining and damaging on an individual.

i fully believe people who make fun of “the weird band kid trope” or like “people who watch callmecarson be like” are just making fun of people with high functioning autism.

When interacting with a neurodivergent person, don’t assume you know more or are more capable of understanding their needs and boundaries compared to them. Treat us as you treat any other neurotypical person, but don’t ridicule or shun us when we show our symptoms.