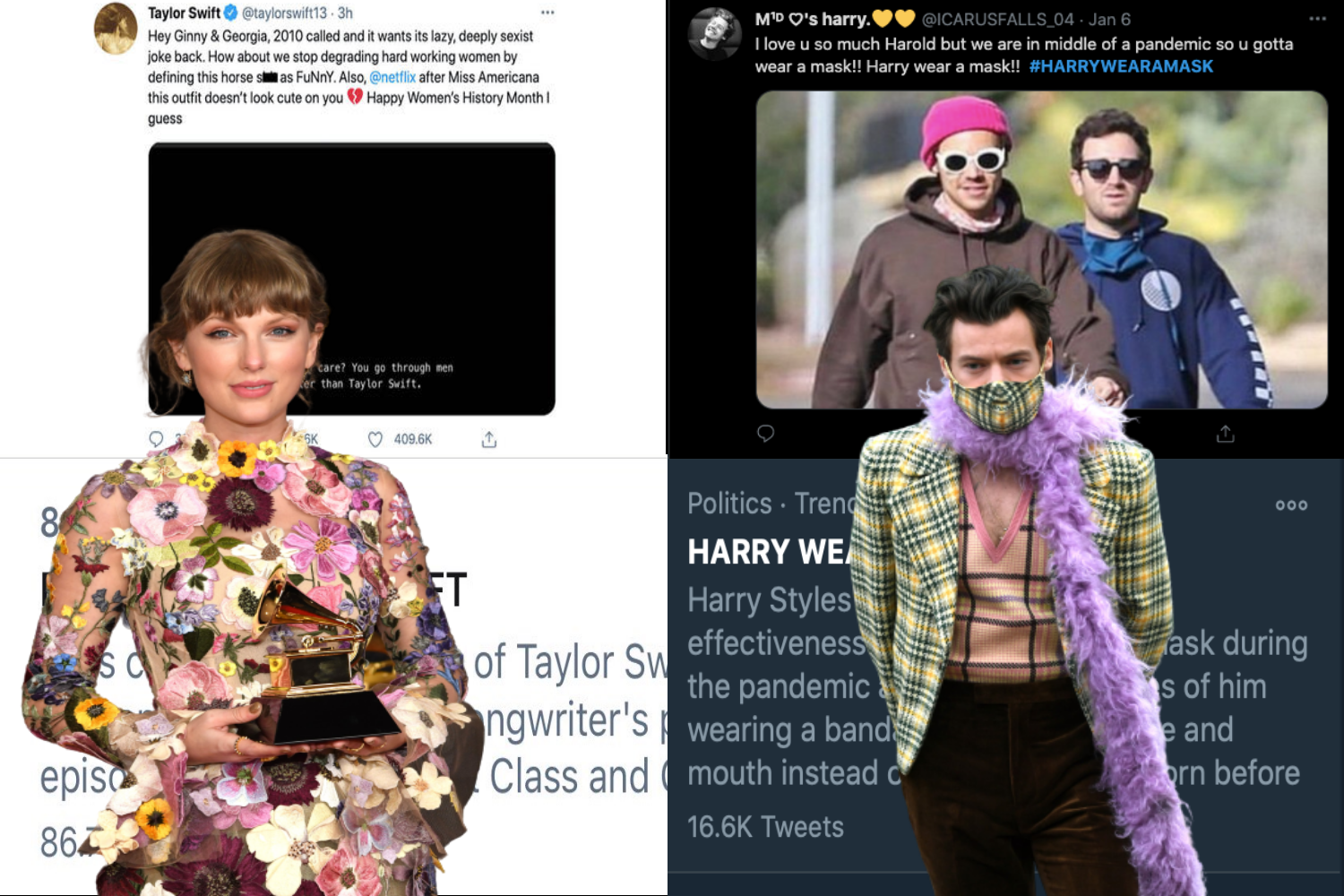 In reaction to scandals involving Harry Styles and Taylor Swift, their respective hashtags had a total of 103,300 tweets between the two of them. ((Photo Credit: Raquelle Elson/Piktochart/Achona Online))

In reaction to scandals involving Harry Styles and Taylor Swift, their respective hashtags had a total of 103,300 tweets between the two of them.

Celebrities Need to Take Accountability of Their Fans (OPINION)

Presently, social media creates a space for fans to connect to each other and the celebrities they support. For instance, this is “stans twitter,” a subculture of Twitter were fans can interact and talk about whichever celebrities they “stan.” This connection allows fans to take their thoughts to the next level, speculating the meanings behind the content they put out, interviews, and posts. With celebrities with particularly intimate and open social media presences, fans begin to believe that they know and understand this person; however, even these intimate moments are a persona. Fans begin to treat these celebrities as they would their friends, a sentiment that can not be reciprocated. Like in a real friendship, fans begin to criticize and hold celebrities accountable for their actions.

On Jan. 6, a picture of Harry Styles in public with a neck gaiter mask made its way onto most social media platforms. Shocked that he would wear a mask that has been proven to be ineffective, Styles’ fans took to Twitter. Because of their disappointment, #harrywearamask was trending on Twitter. Though it is unclear what direct effect this had, Harry Styles appeared at The Grammys with a proper mask.

This same fictitious relationship leads fans to a constant need to defend their celebrity from outside criticisms. In many cases, the morality of the act is completely disregarded. In a “they go high, we go low” fashion, fans often resort to very vindictive methods, such as misogyny, racism, xenophobia, homophobia, and transphobia, to combat these criticisms. In many cases, these insults are not directed at opposing fans, but oftentimes at other celebrities who are completely detached from the situation. BTS, a Korean Pop boyband, a group that is often found in the line of fire when their fans have disputes with other fans. Many will attempt to insult or embarrass BTS fans by using different stereotypes to describe BTS, a prime example of how racism oftentimes finds its way into these situations.

“I’m a BTS fan but I think that our fan base is kind of aggressive towards other fan bases. However, I think this could be sparked by the initial aggressiveness towards the BTS fanbase. I’m not sure why but people are really rude to BTS fans,” said Grace Carreja (‘23).

Celebrities do not feel this same responsibility over their fans, but they should because many of their actions will cause these vicious responses. Many will release statements that they are fully aware will spark a reaction from their fans. While it is important that celebrities stand up for themselves, they must be able to identify the influence they have and also be able to take accountability for the something of their actions. On March 1, Taylor Swift tweeted in response to a line referencing her in Netflix’s new show “Ginny & Georgia.” While her fans were the first ones to take to social media to criticize the show, Swift added to the controversy by releasing a statement criticizing both the creators and Netflix as a whole.

Hey Ginny & Georgia, 2010 called and it wants its lazy, deeply sexist joke back. How about we stop degrading hard working women by defining this horse shit as FuNnY. Also, @netflix after Miss Americana this outfit doesn’t look cute on you 💔 Happy Women’s History Month I guess pic.twitter.com/2X0jEOXIWp

“I think that the reason her tweet was controversial to some people was because it was interpreted as her trying to cancel the actors and the show as a whole. However, it’s really important that we hold the writers accountable for their actions. A lot of young people watch Netflix, and displaying sexist jokes doesn’t set a good example for the next generation,” said Julia Lombardi (’23).

After this tweet, Taylor Swift’s stans, began their rampage. They started by replying “RESPECT TAYLOR SWIFT” under seemingly any tweet that they could find, being that most of these replies could be found under completely unrelated tweets such as one from Netflix celebrating Chadwick Boseman’s Golden Globe win. The stans continued by remerging an old Taylor Swift symbol by commenting snake emojis in the comment section of the actress who said the offensive line, even though she did not write the script.

While there was nothing inherently wrong with her statement, it unnecessarily caused her fans to act in a way that is unacceptable. This shows a need for celebrities to be more conscious of the things they put on social media. Many celebrities, like Taylor Swift, have a very limited social media presence which inadvertently adds an even greater depth to each post they make. In the case of Taylor Swift, her most notable posts lately have been in regards to her music and announcing her support for the BLM movement, causing her statement about Ginny & Georgia to be viewed of equal weight, which it is not nor should it be. The issue is that even though Taylor Swift set this in motion, she made no attempt to condemn her fans for harassing the actress. Even in cases that the celebrity did not set this act in motion, it is important that they release a simple statement explaining that they do not stand for these actions because their fans will listen and work towards changing their behavior.

In defense of celebrities, they are not their fans’ parent. They do not have any real responsibility or connection to them, so there is no real accountability to be had. However, I do think that celebrities should start to address the problems within their fandoms, especially the ones that they cause. Because their fans hold them in such a high regard, if celebrities made any effort to discourage their actions, they would listen. This could prevent a lot of unnecessary aggression and arguments on the internet, not to mention save other celebrities from receiving undeserved hate. Additionally, many fans protectiveness over celebrities is well-meaning and almost admirable because in many cases celebrities are able to get away with incredibly harmful acts.

However, it is important to remember that this “friendship” between fans and celebrities is not real. While celebrities may let their fans into their personal lives, it is only a glimpse and even that is a persona. This is why I cannot whole heartedly expect celebrities take responsibility over their fans, because no matter how much celebrities appreciate their fans, they cannot reciprocate their fans emotions to the same extent.

Alissa Pradera (‘21) said, “I think that fans often gravitate towards celebrities because of the stories behind their music or because they see them as an inspiration. I know I have felt inspired and connected with Lizzo, even though I don’t know her personally in a friendship kind of way. It’s something that happens often. Even though celebrities don’t personally know their fans, fans look up to these icons and view them as their best friends because of how connected they feel to them. I would love to be friends with Lizzo because I see myself in her and we hold similar values, confidence, and more. But realistically, I know that she doesn’t know me and I don’t know her on that close relationship type of level. It’s just hard sometimes feeling so connected to a person in which you know wouldn’t recognize you on the side of the road. I think that is the most difficult part of feeling emotionally close with a celebrity.”

celebrities arent like. ur friends. u dont know celebrities and u dont know their lives apart from what they choose to show the world. you, the consumer of the product that is their celebrity life, have no reason to feel like you have some moral failing by consuming their content