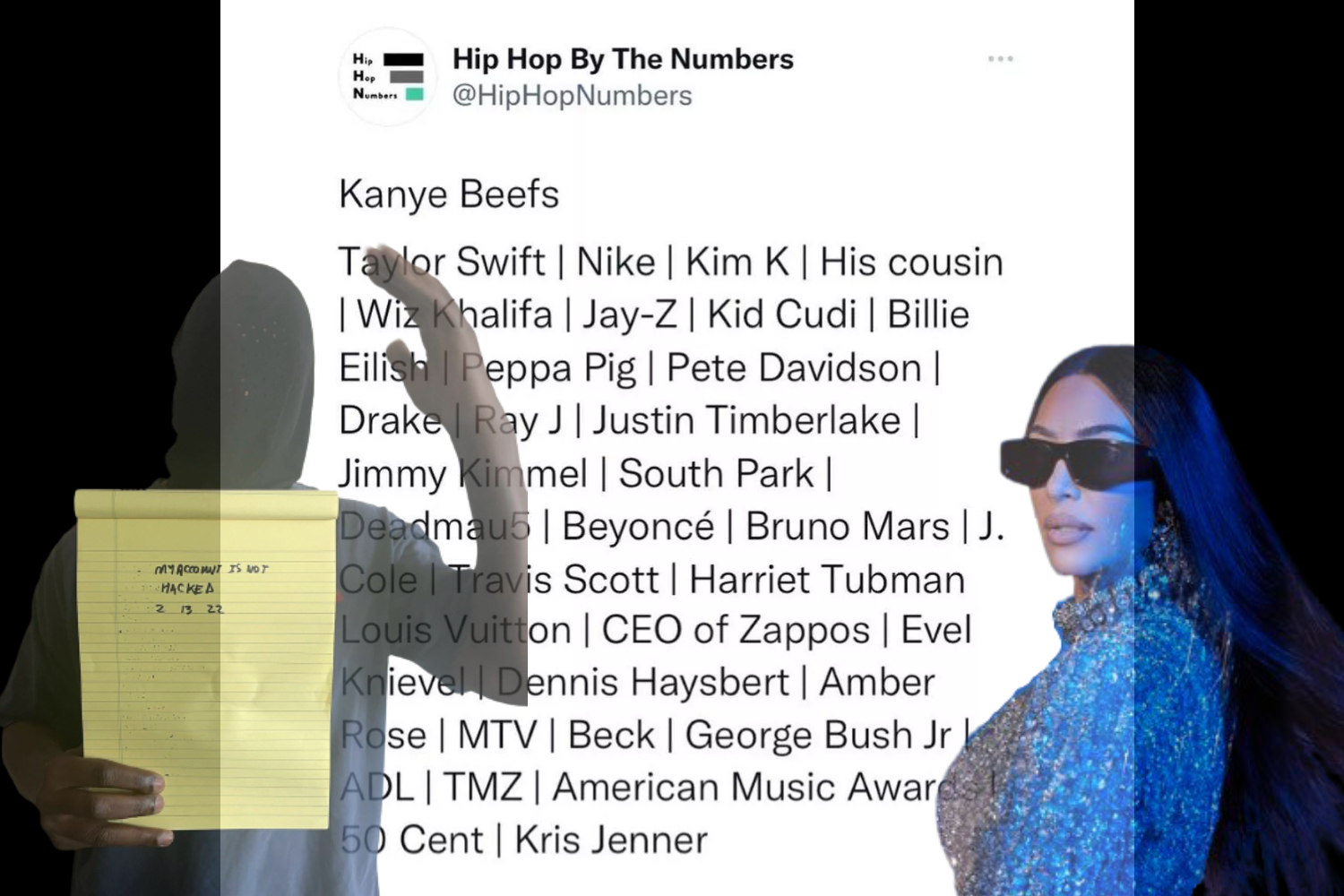 Kanye West has been very active on Instagram recently dragging many different celebrities, but are these rants funny or should we be concerned for Kanye’s mental health and Kim Kardashian’s safety? (Photo Credit: Eleanor Amoriello/Achona Online/ Picsart)

Kanye West has been very active on Instagram recently dragging many different celebrities, but are these rants funny or should we be concerned for Kanye’s mental health and Kim Kardashian’s safety?

In recent weeks, rapper, designer, and apparent comedian Kanye “Ye” West has taken to Instagram to publicly address his family and friends. He has called them out for a multitude of reasons, using all capital letters and photoshopped photos that have bordered on harassment.

West’s many posts included hilarious quips about celebrities new and old. The main focus of his tangent was Pete Davidson, the new boyfriend of West’s soon-to-be ex-wife, Kim Kardashian. Most notably, West decided to give Davidson the nickname “Skete” throughout his many posts. His reason for mentioning “Skete” was to call out their mutual friends, including Kid Cudi and Michael Che. While Che responded with an equally humorous, yet much more sarcastic response to West’s post, Kid Cudi did not take it as lightly, calling West a “dinosaur” and saying he never wanted to be on West’s new album, Donda 2, in the first place.

This led to West photoshopping Marvel’s Captain America:Civil War poster, displaying himself, Drake, Julia Fox, Travis Scott, and Future on one side. Along the other side, West displayed Davidson, Kardashian, Kid Cudi, Billie Ellish (another new beef West has ignited), and long time nemesis Taylor Swift.

Kanye West called Pete Davidson ‘Skete’ and posted a meme based off of Civil War‼️ pic.twitter.com/aWz84b14sg

While West’s photoshop skills were on display, the public seemed to have forgotten just how much Kanye’s bipolar disorder affects his family. After being diagnosed with bipolar disorder in 2016, Kanye has gone on many Twitter rants and even a presidential run that have embarrassed not only Kim, but the entire Kardashian family. While many seem to believe that West’s outrageous dramatics are just a part of his personality, in 2020 Kardashian had to address some of West’s behaviors publicly, stating on her Instagram that his mental health issues were “incredibly complicated and painful.”

Recently, West has taken his Instagram antics too far. He not only has been attacking Kim, but her close friends and even their children, stating in the song “Eazy” which he released with The Game, “When you give ’em everything, they only want more. Boujee and unruly, y’all need to do some chores.”

Meanwhile on Instagram, West has made many outlandish claims against Kardashian and her close friends. He utilized all capital letters to make comments on Kardashian’s outfits, outings, and even exposed private text messages between the two. Kardashian tried reasoning with West, stating in the messages that he was “creating a dangerous and scary environment.”

West then sent her a truck full of roses on Valentine’s day with the message, “My vision is krystal klear”. While apparently intended as a grand romantic gesture, many viewed this as toxic. Not only is it a known fact that Kardashian and West are going through a divorce, Kardashian has publicly stated West is not being cooperative in the legal process of their separation. Therefore, many have noticed that the amount of unwanted attention Kardashian has received from West is a form of harassment and his once humorous posts and vies for attention have officially become concerning.

At the end of the day, West has more than enough resources to have his social media monitored by a public relations firm or even an intern. This is not uncommon in Hollywood and many celebrities have no access to their social media accounts due to the fact that their team believes it is not in their best interest. For example, Adele has stated her team decided she should stay off social media after she posted a culturally insensitive image of herself on vacation in 2020.

After many weeks of cyberbullying and harassing others in the industry, it would probably be in West’s best interest to hand his account over to someone else. The only issue is that West has the reputation to not be fully cooperative with those around him, most likely a result of not only his mental health issues but stubborn personality and overbearing confidence as well.

Alana Lopez (‘22) said about the recent rants, “At first I thought it was funny because of the all caps and memes, but it got to a point where I thought it was getting too far with the Pete Davidson threats.”