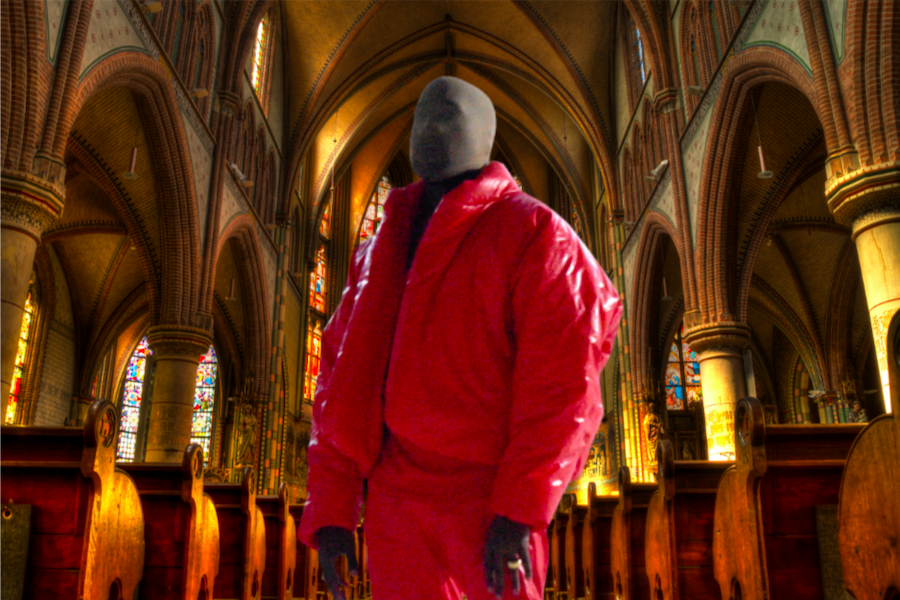 Kanye West has transformed his public identity in the past years to revolve around his new-found faith. This rises questions as to the impact that this has on his worldly audience. (Photo Credit: Olivia Book/Piktochart )

Kanye West has transformed his public identity in the past years to revolve around his new-found faith. This rises questions as to the impact that this has on his worldly audience.

The usage of religion as a scapegoat to make outrageous acts permissible is a commonly used tactic by Kanye West. In recent years, he has morphed his public identity into that of a devout Christian, intertwining his faith into his musical career and often establishing his bewildering statements as testimonial proclamations.آ

In his most recent albums Jesus is King and Donda, praise dancers and gospel choir have accompanied West while performing renditions of his pop hits. Prior to his release of Jesus is King in 2019, West had many episodic declarations of faith in the public eye. The most shocking of which included the opening of his church in early 2019. The services, as described by West, are more of a musical ministry, which he calls Sunday Service.آ

With the opening of his church came waves of narcissism and intensely polarizing political views, which evidently concerned most. But what effect did this have on followers of his shared faith? The extremely coincidental timing of both his outburst of religion and manic episodes seemed to be calculated in that one was justification for the other.آ

In 2016, West was diagnosed with bipolar disorder, which is noted to consist of varying mood dispositions. Bipolar disorder may cause manic episodes and mood swings which typically shift between low depression and mania. Timing of episodes and moods vary from person to person. West, as a sufferer of this mental illness, has accredited his fluctuating religious practices to his uncontrollable mood changes. However, one must ask themselves, to what extent is it permissible to use mental illness as a justification for outrageous acts?

With West, for example, this behavior is not new. West is infamous for his outrageous outburst at what always seems to be the most inappropriate times. One of the most notable was at the 2009 MTV Music Awards, when West jumped from his seat to interrupt Taylor Swift’s acceptance of her award for Best Female Video. He ran on stage to declare that Beyonce had one of the best videos of all time, leaving viewers stunned for years to come. A decade later, West again supported himself by telling Nick Cannon in September of 2020 that, â€œIf God didnâ€™t want me to run on stage and say, â€کBeyonce had the best video,â€™ he wouldnâ€™t have sat me in the front row.â€‌آ

We will change the world. God is on my side. I am a Christian. I am a tax payer. I am myself. God is with us.

As he spelled out for himself, despite public outrage for his actions, he accredited them to his religious affiliation. This, however, feels as if it is just a write off. Moreover, his distorted storyline of religion has tarnished his cult followingâ€™s perception of what faith is.آ

Yes. He preaches “Yeezus”
in order to $ale mu$ic. pic.twitter.com/yq1WV7hdq8

His church once again was the lead in many controversial outlets as many were voicing that they felt as if Christ was not at the center of his practices and that his gatherings were purely to get his name in people’s mouths. This was deeply concerning for many as they felt his conversion of faith was more about West himself than the religion.آ

What makes kanye west qualified to be a preacher? People of faith dedicated their entire lives to this. He’s making a mockery of the religion “Yeezus”. I wonder if he believes he is a prophet or somthing?

His decision to establish his church alongside the release of an album seemed to be a decision that arguably overshadowed the religion for his name and brand. Adele Politz (â€ک23) said, â€œI am glad that he was able to find himself and was noticeably excited to share with his community his religious standings, however, I feel as if it could have come from questionable intentions.â€‌

In the recent years of Westâ€™s work, he has intertwined verses from the Bible and presented his music with a prophetic tone. Moreover, many people find this to be disingenuous.آ

It is undoubtable that oneâ€™s faith can drive their daily desires, lifestyle, and impact them greatly. However, in the case of West, he is not using it as a push to better himself or the community.آ

Well with his history of calling himself Yeezus, to start touring to churches when heâ€™s not a preacher by any measure of merit what so ever, plus heâ€™s making money off God.