Athletes Join the “Movement” of Not Standing During the Pledge 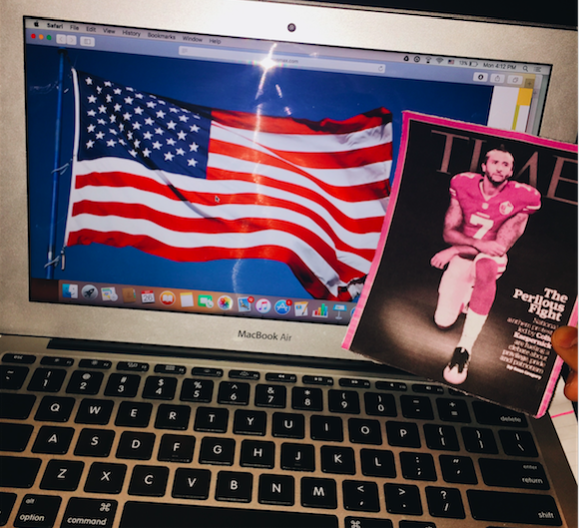 Not only have famous athletes joined the protest, but high school football team players have as well.

Athletes have started a movement rebelling against traditional norms of standing during the National Anthem to raise awareness for minority inequality and oppression.

San Francisco 49ers quarterback, Colin Kaepernick, refused to stand up during the National Anthem before his team’s play against the Green Bay Packers due to his outrage about the unjust killing of Terence Crutcher. Kaepernick defended his actions by stating that he would not stand up to show pride in a country that oppresses people of color.

Not only has Kaepernick gained the support of the men on his team such as Eric Reid, but he has begun to influence other teams around the country including Brunswick High School’s football team, to join the protest.

Kaepernick has begun a nationwide movement that he claims, won’t be shut down until “this country is representing people the way that it’s supposed to.”

Is this activism a rightful way to raise awareness about oppression or is it a disgrace to the Country?

Junior, Nina Alberdi shares “I understand we cannot control people and everyone has their own rights to stand or not to stand for what they believe in, but what he did is just rude, disrespectful, and not appropriate under any circumstances.”

Athletes like Kaepernick are very influential due to their status, so when a movement this controversial is brought to the public eye, it not only promotes activism and makes the issue more evident in society, but can easily offend people who perceive these actions in a different way.

Sierra Wills believes this movement to be disrespectful to America’s veterans, adding“Many people do not understand why they are standing for the National Anthem. It is not because they have to or should, but it should be out of respect for our country and those who serve it.”

Although many people regard this movement as disrespectful, others view this protest as an opportunity to popularize the Black Lives Matter movement.

Julia Lee stands by this protest with a more objective mindset, sharing “What’s the point of being forced to stand for a pledge that you disagree with? It is more disrespectful to say it and not mean it than to not stand for it at all.”

Athletes that have decided to remain seated for the National Anthem during nationally televised sports events have started a popular political movement encouraging the abolition of racial injustice.