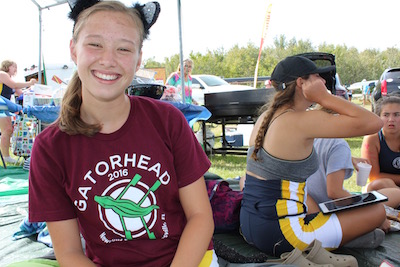 Although the schedule for crew is quite RIGGERous, fun regattas, such as the Halloween Regatta, make it all worthwhile.

A true highlight of the Academy crew team’s fall season is the annual Plant High School Halloween Regatta. This local regatta, held at the Tampa Bypass Canal at Harney Park, is popular among the team because it allows for rowers to dress up in creative, jubilant costumes with their racing boats. This 4000 meter head race is also celebrated among the many clubs and schools who make the scene. With more than 400 entries, this meet is gradually evolving itself into becoming the most popular and biggest head race in Florida. On October 29, the Academy of the Holy Names participated in the well-renowned regatta with nine entries.

Freshman Maddie Moffet remarks, “It was great to see how much the rowing community has grown; the Halloween regatta is a perfect example of the growing interest.”

For the Academy team, the action-packed day began at 6:45 am followed up by a mandatory coxswain and coach meeting at 7 am. Once the team prepares the boats for racing, they go back to the AHN tent and begin to deck out in Halloween-inspired costumes and accessories.

In the past, the Academy girls have dressed up solely with their own boats. However, since the majority of rowers rowed in multiple boats this year, it was decided among the team that each of the grades had their own theme.

The rowers were not the only ones dressing up; the Academy coaches also decided to embrace the festive Halloween spirit. Coach Stephanie Brouwer proved her miraculous makeup skills by using daily makeup products to resemble a skeleton. Head coach Jorge Rodriguez stuck with a Halloween Regatta tradition by wearing a humorous tank top that reads, “With a body like this, who needs a costume!”

Unfortunately, as the day progressed, a strong cross-wind was cultivated and forcefully pushed boats to the other side of the river. This weather made it difficult for coxswains and bow seats who were trying to keep their boats in the race course. The coxswains and rowers successfully controlled their boats and, fortunately, no Academy boats went into the practice lanes during the race.

Here are the results from Saturday’s races. The Halloween Regatta is only one of the many head races that the AHN crew team attends. The experiences that are shared and the memories that are made at regattas are what make crew such an extraordinary sport.