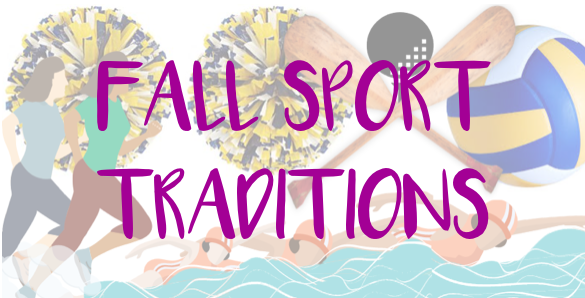 All sports have something unique about them, but sports at Academy are second to none! Photo Credit: Chloe Paman

Each Academy fall sport is special in its own way. Whether it began a long time ago or just recently, each tradition keeps a special place in the athletes’ hearts and remains an expression of loyalty to their team, or to athletics in general. Here are a traditions that each Academy fall sport does that is second to none.

Senior, Audrey Anello comments, “At the annual Halloween Regatta at the Bypass Canal in Tampa, each boat lineup dresses up in a halloween costume. My freshman year, I was the coxswain of an eight, so all the rowers dressed as cats and I dressed as a mouse. They’re super simple costumes, but no other teams dress up and it makes it so much more fun. We also do this chant at the end of every practice and regatta when we put our left hand in a circle and the team captain calls “AHN on 3! 1, 2, 3” and then the whole team goes “AHN WOOO” and we throw our hands up. It’s kind of like a good luck thing before races or an official “practice is over” on any weekday.”

Four-year swimmer, Anne Marie Yatsula shares, “Each year, we hold a swim team sleepover. The most fun part of the night is when the seniors “haze” the underclassmen, engaging in messy games and using paint, whipped cream, and other gross substances to messy-up our gals. It’s a fun night, and it’s truly unique to swimming.”

Rachel Rosales, senior on Academy’s varsity volleyball team shares, “This year the volleyball team went to Scream-A-Geddon as a way to bond more as a team. Though we were all scared the entire night we had a fun time spending the night together. The best part was that our coach even came with us and the team scared her the entire the night and she was scared the most.”

Senior and four-year cheerleader, Shannon Flaharty comments, “During the third quarter, we go over to the other teams cheerleaders and do “games” with them (like ‘Little Sally Walker’ or sometimes they will come over to our side and we all do “Are You Rowdy With Blue Tide and others”). I feel like this is unique because in pretty much every other sport, the other team is your competitor, so you probably wouldn’t go over to their side of the court and start singing songs with them, but in cheer it’s fun to meet all of the other teams because they’re always so nice and when its home games we always bring each other candy.”

Junior and two-year member, Sara Phillips shares, “If you’ve seen the XC yellow tie dye shirts for this season, they say I GOT YOU on the back. Over the summer, some of the team goes to a Cross Country camp in North Carolina (All-American Cross Country Camp). There is a seminar on the mental aspect of running, and this year the lecture guy suggested that you support your teammates with some kind of motto, and he had us get up, point at our teammates, and say ‘I GOT YOU!’, and it stuck. So, we do that during races and during really hard practices. We also do a prayer circle before every race.”

Four-year member and Senior, Rachel Tata shares, “Every Christmas for Jaguarettes we do Secret Santa for a week in December. Everyone randomly picks a person on the team out of a hat and we bring them small gifts throughout the week. Its really cute and at the end, we do one big gift swap where people have to guess who was their Secret Santa. ”