Ronda Rousey Comes Out of Hiding and Returns to the UFC 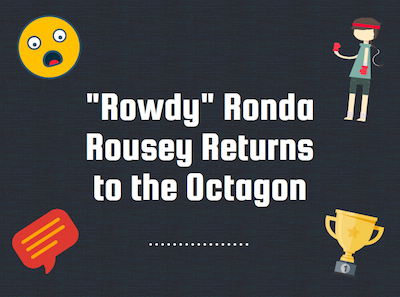 Before becoming a mixed martial artist, “Rowdy” Ronda Rousey pursued a career in judo. In the Beijing 2008 Olympics, she became the first American judoka to earn a medal at the Olympics.

After taking a year off, Ronda Rousey, the first Ultimate Fighting Championship’s Women’s Bantamweight Champion, returned to the octagon in a much-anticipated fight against reigning bantamweight champion, Amanda Nunes, in UFC 207 on December 30. Although Rousey had been hoping to redeem herself in this fight after losing to Holly Holm in 2015, the referee ended the fight after only 48 seconds into the first round for Rousey’s sake. Rousey’s second career defeat was brutal, as she had only thrown seven punches against Nunes and her face had appeared to be gnarled and mangled up by the time the fight was over; her opponent had almost four times as many strikes as her, with a total of 27.

Sophomore Mackenzie Ker says, “She was on that winning streak for so long and once she was defeated, she felt that she was not good and had already peaked.”

The 29 year old American mixed martial artist was respectively the top-ranked female fighter in the world until her defeat by Holly Holm in UFC 193. After hiding from the spotlight for a while, Rousey began promoting the UFC 207 fight with the tag “fear the return” in early October. Rousey also created a video to hype up her fans and viewers.

Regardless of the amount of views it has recieved, some people feel as if the hype video was not the right way to approach the upcoming fight.

“Although I do not agree with it, it is normal in society to try to sell yourself. I am glad that she came out of her dark stage, but she should have acted in a more ethical way,” says freshman Olivia Perez.

In interviews with big magazines and television hosts, Rousey’s confidence seemed to be peaking, as she was sure that this fight would not only retrieve her fame, but show her believers that there was no impossible challenge. Rousey revealed that she was working harder than ever to prove that her loss did not define her; rather, she would recover and eventually return with the fierceness she is notorious for having-in and out of the octagon.

Entering the Octagon for the first time in over a year .. #UFC207 pic.twitter.com/r0vo9xexjD

Rousey is taking her loss similarly to how she took it when she lost to Holm-shying away from MMA interviews and refraining from the use of social media.

“I kind of feel bad for her. I think it was important and right for her to come back and try to redeem herself. Maybe she was behaving in a frenzied manner because she was focused on trying to keep her winning name,” says sophomore Audrey Gabbard.

Unfortunately, due to her two major career losses, Rousey’s career is in danger of tarnishing. Although Rousey is noted for being the first UFC Women’s Bantamweight Champion, she called even more attention upon herself by publicizing her return to the UFC. The plans she had for her redemption as the “World’s Greatest Female MMA Fighter” dismally backstabbed herself when she lost terribly to Nunes.

Freshman Sophia Arnold contradicts Gabbard and says, “I did not want her to win because she was making herself out to be the greatest. She was also acting with a lot of arrogance. I think it is strange that she promoted herself on social media to win people over. Rather than all of that, she should take on the good form of confidence.”

Through her brief return, Rousey is shown to be an undeniably strong-minded female. Whether it was performed with bravery or arrogance, the revival of her career requires courage. In the face of great risk, Rousey conquered her fear of failure and acted with heroism-a trait that athletes aspire to attain.