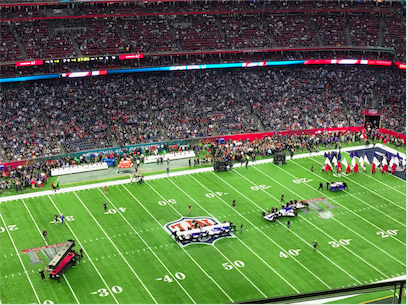 On Sunday, families from all over the country gathered together among copious amounts of pizza and wings to witness the 51st Super Bowl. As the New England Patriots faced off against the Atlanta Falcons in Houston, Texas, dozens of records were shattered throughout the game.

Recovering from their 28-3 score in the third quarter, the Patriots quickly recovered and managed to tie the score, resulting in the first overtime in 51 years of Super Bowl history.

Senior Ciara Chappell says, “[My mom] cried when the Patriots won. No joke.”

No it wasn't a dream, Brady and the #Patriots made the biggest Super Bowl comeback in history & are champions. Remind everyone today!!!!!!!

Patriots running back James White, who scored the game winning touchdown for his team, broke the record for most points scored in a game.

JAMES WHITE WINS IT FOR THE @PATRIOTS!

WHAT A GAME! #SB51 #PATRIOTS https://t.co/nZzQJGWRmC

The Falcons’ 25 point lead on the Patriots seemed to be too much to recover from, but the Patriots’ comeback and ultimate win was a record breaker in NFL history.

With a combined 54 first downs for  both teams, the Falcons and Patriots set a new Super Bowl record.

Senior Sophia Bahr says, “When the Pats won I was so excited to see him win his 5th Super Bowl. [Brady] has a perfect career, perfect wife, makes millions, is well-respected (pre-deflategate), and overall seems like a genuine guy.”

In what is being dubbed as the “greatest game in Super Bowl history”, the Atlanta Falcons and the New England Patriots faced off in a record breaking match that had Americans everywhere on the edge of their seats.