Junior, Nina Alberdi says, “I am really excited for this year’s track season. With more girls on the team, I can definitely tell this year is going to be great.” Photo Credit: Chloe Paman/Achona Online

The Track and Field sports season has finally begun. On Friday, February 10, Academy’s track and field team had their first meet, competing against each other at their intrasquad Blue and White meet on the Jesuit High School track.

The annual blue and white meet help Academy runners figure out what event they are strongest in. Rather than going straight into a race for the first time against another team, this meet is to help the athletes also understand how a meet plays out by simply racing against your own team mates.

The team is split into two smaller teams, the blue and gold. Those in the blue team wear a blue shirt, those on the gold team wear either yellow or white shirt to compete in. The meet began at 4:00 pm, athletes arriving at around 3:45 pm to begin to warm up. This warm-up consists of two laps around the field on the track, then a team stretch.

All of the members participate in the meet, running in the 100m, 1600m, and 200m. Those in field events participated in, discus, shot put, and long jump.

This meet is crucial for the runners because it helps them understand the schedule of a track meet including:

Conditioning began Monday, January 9 where the athletes met at the senior pavilion to be told by Coach Ray Rodriguez the rules of the sport and the arrangements of events at meets, and the first official day of practice was January 23. From this, girls were exposed to the many opportunities held in the team and were categorized based on the events they wanted to do. From short, mid, and long distance events, the team has gained a large variety of types of runners which will be beneficial for the future of the team.

Senior, Lara Lontoc, who has been on the team since Freshman year, says, “There are so many new people trying out different events. There are a lot of freshmen, which bodes well for the next few years. Definitely more people in the field events which is pretty surprising.” 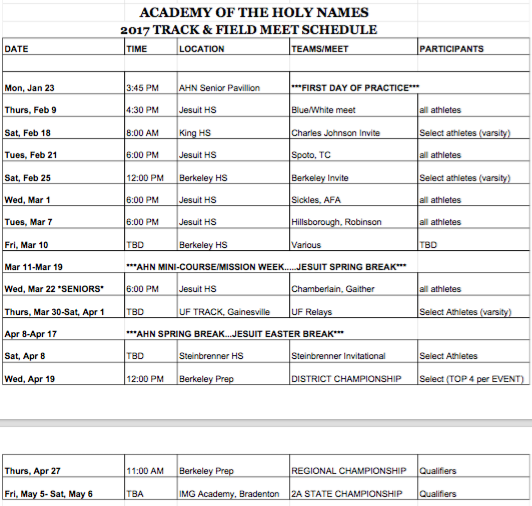 Gallery|3 Photos
The track and field season lasts for four months, from January 23 to May 6 if certain girls qualify for 2A states. Photo Credit: Chloe Paman/Achona Online
Leave a Comment