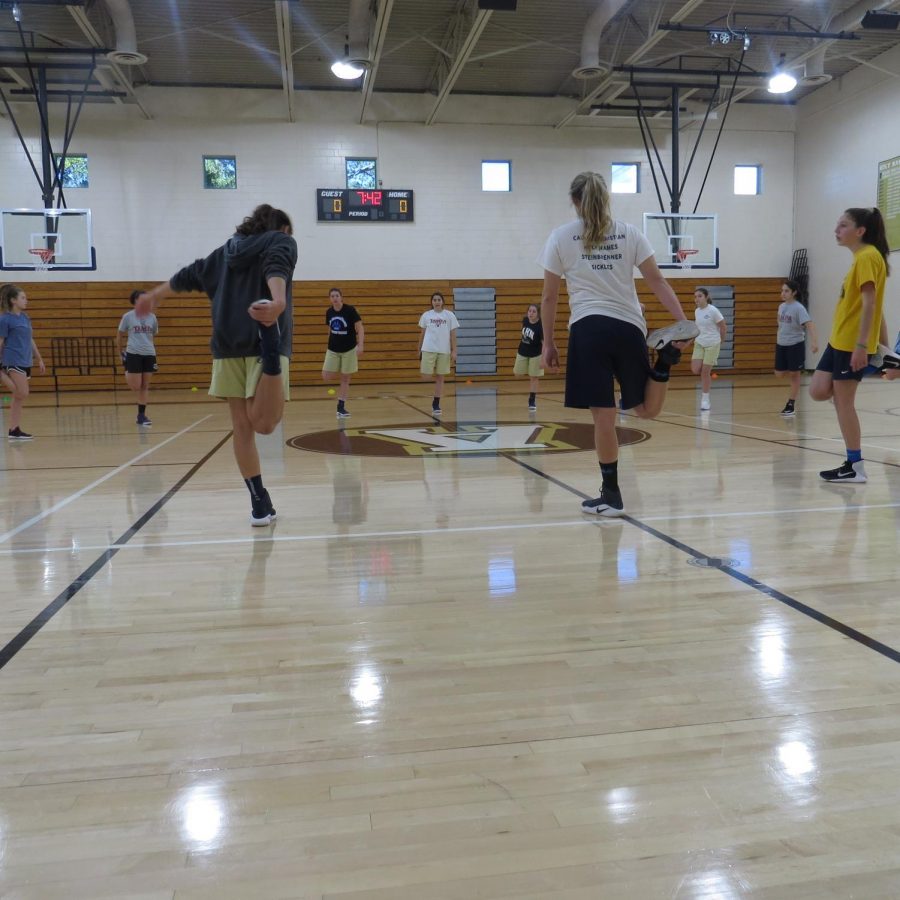 Basketball was invented in 1891.

All grade levels are represented in the tryouts. Every year the amount of freshmen that show up to the tryouts varies, and it is never certain that they will come back for the second round of tryouts. This year, the former team members were pleasantly surprised to see the amount of underclassmen present.

“Tryouts have been really good. There were more freshmen who came out than I thought,” said Lindsey Perez (‘18).

The group of new girls have impressed other veteran players during the tryouts.

Mickey Carney (‘18) said, “It looks like we will have good JV and Varsity teams this year.” In agreement, Katherine Hahn (‘18) said, “We have a couple of stars in the making.”

The freshmen on the team have started to create a bond with the older girls, and already have some favorite activities to participate in during the tryouts.

Samantha Meurer (‘21) said, “I like the people on the team because they are a lot of fun, and scrimmaging is my favorite part of tryouts so far because it is not just running.”

The underclassmen have shown their talents on the court over the past couple of days and are enjoying being a part of the AHN basketball community. While this is the freshman’s first experience on a high school basketball team, the rest of the girls at the tryouts are back for another season and are working hard.

The group does many different drills throughout the tryout.

It takes a lot of stamina to not only get through the tryouts, but the whole season; however, this has not stopped any of these girls.

Dorothy Pickard (‘20) said, “I have played basketball since I was in middle school, and I like to be on a team and the intensity of the game.”

While it is an exciting beginning to the new season, the seniors are feeling a little sad that this is their last year on the AHN basketball team.

Kayla Eckermann (‘18) said, “Knowing the fact that it is our last season is the most difficult part of the tryouts.”

Even though the five seniors on the team are nearing the end of their time on the AHN court, there still is much to look forward to during the season.

“I’m most excited for Lindsey to hit her 1,000 points, because it is such a big accomplishment, and for senior night since I have been looking forward to it since freshman year,” says Carney.

Varsity’s first official match is an away game Monday, Nov. 14, against Alonso at home, and JV’s first match is a home game Wednesday, Nov. 28, against Cypress Creek.