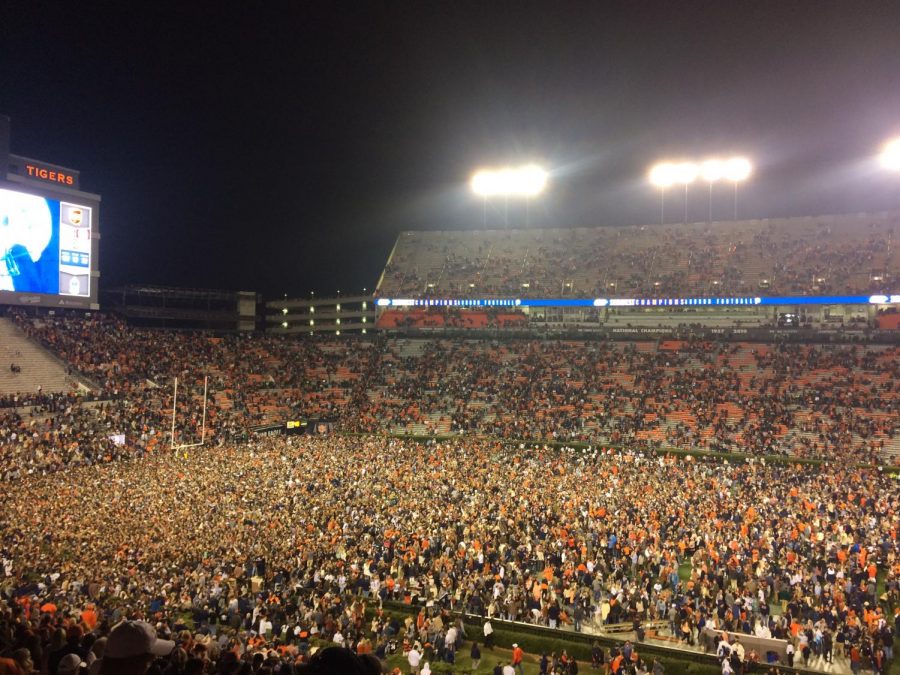 This is Auburn’s third offense against the SEC rule prohibiting rushing the field after a victory.

Every year, the Saturday after Thanksgiving, Auburn and Alabama fans gear up for their most anticipated game of the season. This game is called the Iron Bowl, a rivalry match between the state of Alabama’s largest college football teams. The teams both came into the game as ranked in the top ten teams in college football. Alabama was ranked number one and Auburn was ranked number six.

Auburn took an early lead by scoring first, but soon after, Alabama tied the game up making it 7- 7.

Then, Auburn managed two field goals, one in the second quarter and the other in the third. However, the Alabama Crimson Tide took the lead by one point in the third quarter after scoring their second, and last, touchdown of the evening. As the Auburn crowd grew anxious, the Tigers gained their momentum back and managed to score a touchdown as well, making the score 20-14 at the end of the third quarter.

In the fourth quarter, Auburn’s Coach, Gus Malzahn, made an interesting call after Auburn’s final touchdown of the game. He decided that instead of kicking the extra point, the offense would stay on the field and go for two points. To the dismay of Malzahn, the two point play failed, and left the score to be 26-14, which ultimately was the ending score for the rivalry game. This made the Auburn Tigers not only the winners of Iron Bowl 2017, but also the SEC West Champions.

No one on the pregame show, besides Auburn basketball legend Charles Barkley, picked the Tigers to take home the victory. Even many Auburn fans were unsure of the fate of the game coming in, and were anxious until the clock ran out.

Math teacher, Anne Mikos, said, “I am super pumped Auburn won because now Clemson (her alma mater) is projected to be number one.”

Another teacher who was cheering on Auburn was high school religion teacher, Felix Kalinowski.

He said, “I was rooting for Auburn because Alabama is always in the national championship, and it is nice to see someone else get a chance. Watching a team like Auburn beat Alabama was awesome because of the difference in athletic recruits.”

The aftermath of the victory at Auburn was pure joy and excitement from the Auburn crowd. The announcer’s request to not rush onto the field was heavily ignored, and the student’s section, as well as many other fans, jumped over fences and bushes to get on the field to celebrate the win.

What remains of the hedges at Jordan Hare Stadium pic.twitter.com/EzahVDzxou

Also, as is tradition, Auburn fans went down to Toomer’s Corner and threw toilet paper into the trees. This is what is done after every Auburn victory to commemorate the times  when news was only delivered in the town by telegraph. An employee from Toomer’s Drug Store would throw a roll ticker tape over the power line to let everyone in town know that Auburn had won their game.

The Auburn football team now is preparing to take on Georgia, again, in Atlanta in hopes of beating them again to take the title of SEC Champions. Whoever wins will go to the playoffs for the National Championship in college football.