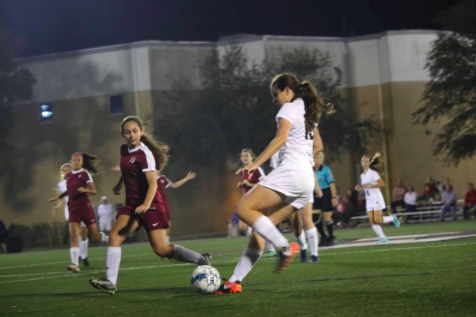 The 2017 soccer season is off to a successful start with three wins and one loss. The varsity team includes many underclassmen who have shown proficient skills during tryouts and games. The varsity soccer team’s first game was against Plant High School in which they won 4-3 and they continued their win streak at their second game against George Jenkins High School with a 3-0 victory.

The junior varsity team won their first game 8-0 against Tampa Catholic on Nov. 7, 2017 and will play their second game against Clearwater Central Catholic high school on Nov. 14, 2017.

Varsity soccer team co-captain, Mckenna Weathers (‘18) said, “This season is just starting and we have a really strong team this year. We have a lot of underclassmen stepping up and rising to the occasion, as we have had a few injuries already.”

The varsity soccer team competed this past Wednesday, Nov. 8, 2017, against Newsome high school where they lost 3-0.

The junior varsity team won their first game 8-0 against Tampa Catholic high school on Nov. 7, 2017. Their second game will be against Clearwater Central Catholic on Nov. 14, 2017.

Olivia Tremonti (‘20) said, “So far I love how well we have all bonded and stuck together through all the struggles we’ve already faced.”

Lauren Dingle (‘19) said, “What I love about our team is how everyone banded together both in supporting Claire and stepping up our game in order to fill her role as best as we can.”

Last year the varsity soccer team made it to regional finals and this year, they hope do the same or better with a united and hardworking team.