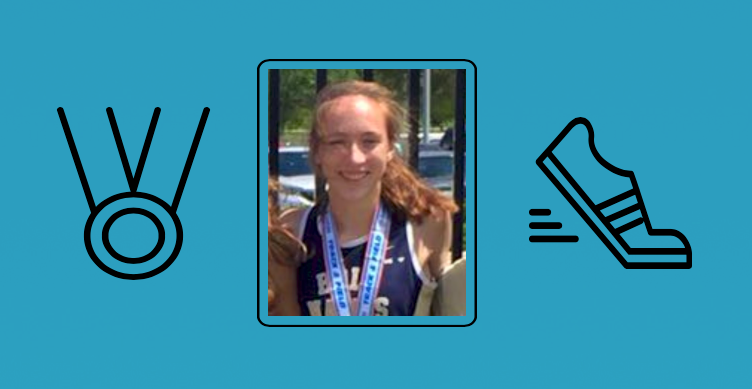 Hughes has participated in Cross Country and Track during both her freshman and sophomore year.

Megan Hughes (‘20), a member of Academy’s Cross Country and Track team, broke several records throughout the month of April.

Hughes said, “I developed a love for running through the relationships I formed with my teammates, who have become some of my best friends since starting high school. Not only that, but our Cross Country and Track coach’s dedication and passion for running are contagious and inspiring. I love the level of fitness maintained through training, the competitiveness of races, and the gratification in crossing the finish line.”

Hughes said, “I was really excited to have such a successful season and to be able to contribute to the team’s scores at meets. I wouldn’t have been able to do it without the dedication of our coaches and the support of my teammates and classmates.”

Congrats to the AHN track team for their performance at Regions today. Special shout out to basketball players Megan Hughes, for advancing to States in the 800, 4×4 and 4×8, and Mickey Carney for breaking the school record in the shot put!

Several Academy students supported Hughes last weekend while she competed at the State Meet. Overall, Hughes not only broke the record for the 800m run for a third time, but she also placed fourth overall. Hughes beat her previous record from the Regional Meet by almost three more seconds, leaving the record at 2:14.08.

Greta Dieck (‘19) said, “What’s great about Megan is that she is one of the greatest runners the school has ever seen, but she is super humble about it. She cares about her team just as much as her own performance.”