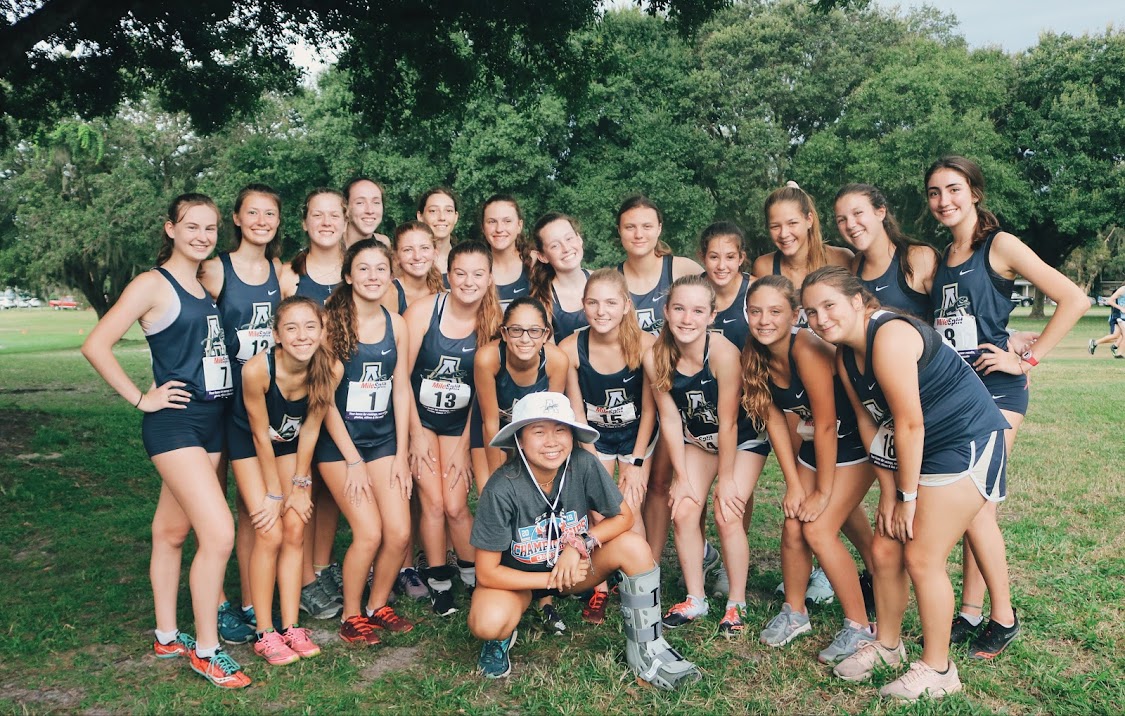 On the line before every race, Coach Raymond Rogriguez sends off the athletes with a pre-race fist bump. (Photo Credit: Katelyn Chau (used with permission))

On the line before every race, Coach Raymond Rogriguez sends off the athletes with a pre-race fist bump.

For many sports, running is a supplemental; a part of conditioning or a tolerated variable in an otherwise larger game, a punishment classified by suicides across a court or laps around a field. However, for two dozen girls in the academy community, running is their entire objective. There are no rules other than stay on the course and no half times other than the split markers between miles. It is straightforward and simple, but you can still easily lose yourself in the moments between “set” and the pop of the gun.

This year, the cross country team is composed of eight freshmen, three sophomores, four juniors, seven seniors, and a seventh-grader. Head Coach Raymond Rodriguez, when not leading afternoon practices, can be found in the halls of the science wing, a recent addition to Academy’s science department as a biology teacher. History teacher, Stacy Filocco, can also be found at practices. As a new member of the team, Filocco helps demonstrate drills and stretches while assisting in leading the girls.

“The cross country team is really great because when I first came in as a freshman I didn’t really know anyone and immediately everyone was so nice and it really feels like more than a team, I guess, it’s like a big friendship,” said Abigail Chudzinski (‘23).

The cross country team has a strong presence among other competing high schools. In the final meets of the season last year, the AHN team finished third at districts and regionals and tenth at the state meet. One of the biggest accomplishments from last years’ season was the breaking of the school record, achieved by then-junior Megan Hughes. The 5k record previously set in 2012 as 18:47 is now down to a whopping 18:24, dropping the time by 23 seconds for the 3.1-mile race.

Cross country has always had a strong presence at Academy and this year is no different. At a recent meet on Tuesday, September 17, the AHN team made their mark by finishing first as a team and individually, as senior Megan Hughes took first place. The West Hillsborough Invite was a close race, Academy only beating the Plant High School team by one point. Cross country meets are unique in that the team with the least amount of points at the end wins. These scores are determined by the finishing places of the first five athletes on a team. For example, at the West Hillsborough Invite, the top five AHN athletes finished in places 1, 5, 6, 20, and 22 while Plant HS athletes group finished in places 9, 10, 11, 12, 13. When totaled, the Academy score is 54 compared to Plant’s 55 points, therefore AHN won. In the event of a tie, the place of the sixth and seventh team runners will factor into the score, as seven athletes participate in varsity races.

“When I first arrived at Academy, the first group of people that I met that really reached out to me and made sure I felt welcome was the cross country team because the season started before the school year. It’s the same group of girls that I’ve gone through the years with who are still some of my best friends. It’s not an easy sport, so you really see a group of people come out that are dedicated, who are willing to work hard for a common goal and I think my favorite thing about seeing the team evolve through the years is how much has stayed the same in that way that everyone is approaching it with the same attitude and that it’s a group of people you can turn to,” said Megan Hughes (‘20).

Compared to the cross country meet schedule, the recent Tuesday meet was a little unusual. During the week, workouts are scheduled Mondays through Saturdays, with Saturdays usually reserved for meets or longer distance runs ranging from five to eight miles long. Wednesday mornings, some team members can be found attending 6 a.m. practices while an alternate practice is held in the afternoon. New this year, a more rigorous and organized weight training schedule has been supplemented into the training. On Tuesdays and Thursdays, the team can be found in the weight room before runs, the new workouts prepared and supervised by Coach Filocco. Another addition to this season is a sprinter conditioning program, added to select practices. For a couple of practices a week, sprinters are invited to join the cross country runners to train with the track sprint coach in preparation for the track season in the spring.

With only 23 girls on the team, cross country is an intimate sport. Although there are individual medals and times, it takes a team to win a meet. In the midst of a race, everyone is going through the same thing in their own way, but in the end, everyone comes together to deliver on a successful finish. The best description of this is in the words of Megan Hughes, “Because it’s so challenging, it’s also equally as rewarding and to share that with such a close-knit group of people is really special.” It is the hope that 2019 is another strong year as this team kicks off their season on the right foot.