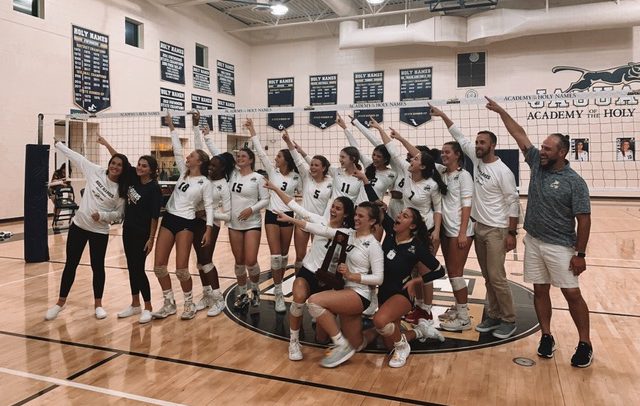 The Academy Volleyball Team won their last state game in 1977.

The Academy of the Holy Names Varsity volleyball team won their Regional Finals Game on November 5 at seven p.m. After a tough battle against Nature Coast Technical High School, AHN won three out of the four sets total.

“This is my first year on the volleyball team and I absolutely love it.  I am so excited to be going to states as a freshman.  Districts have been a really fun experience and has brought the team really close together.  I am really lucky to have such an amazing team and hopefully we can make it even further than States,” said Camille McClendon (’24).

The Regional Finals game was held at Academy of the Holy Names with many AHN students coming to support. The student body theme for the game was “tourists.” Girls dressed in sun hats, Hawaiian shirts, and sunglasses.

“I love going to the Academy volleyball games. I have been to every district game and it feels good to support my school. The team always plays their hardest and are really entertaining to watch.  I hope we win states because I know the team is really talented and it would be awesome to see their hard work pay off,” said Abigail Weaver (’21).

Your 4A-Region 2 champions-pointing the way to the State Final 4! Special night and even sweeter when you can do it at home in front of you friends, family and faculty- thanks to all who made it out tonight and GO JAGS!! ⁦⁦@holynamestpa⁩ ⁦@TBHomeTeam⁩ pic.twitter.com/uHrOLMTIo6

“I have had so much fun this season. As a team we have grown so close and each game we play better because we communicate so well.  I love all the girls on my team and I’m so proud of how far we have made it,” said Mia Zazzero (’21)

Lauren Donofrio (’24) and Olivia Mortellaro (’21) were the arguably stars of the games. The team as a whole made 26 digging plays. The two girls made 12 of those plays between themselves.

Jenessa Bailey (’21) and Gabby Butler (’20) assisted the ball a total of 28 times between the two of them. This means they set the ball up in the air to be spiked over by another player.

“I am so excited for States on Saturday. We have been working really hard and I love my teammates. I think it is going to be a hard game but either way I am proud of how far we have come so far.  It’s really nice to have support from students that come to our games and it makes me really excited while playing,” said Sara Vivero (’20). 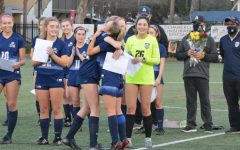