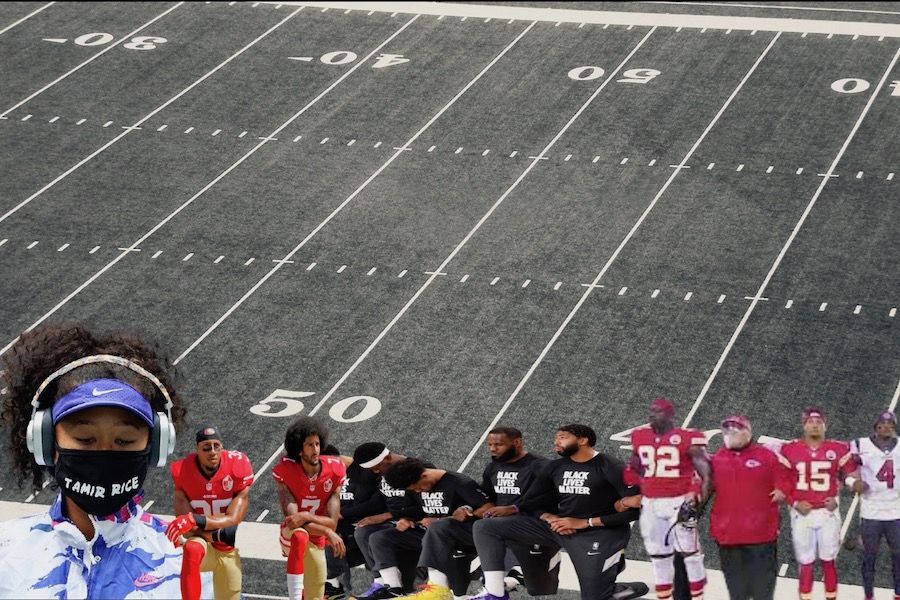 In response to the uproar of Black Lives Matter protests this summer, many athletes have spoken out in support of the movement. (Photo Credit: Raquelle Elson/Achona Online/Piktochart)

In response to the uproar of Black Lives Matter protests this summer, many athletes have spoken out in support of the movement.

Athletes Speak Out In Support of Black Lives Matter

Following the uprising of Black Lives Matter protests and conversations about race relations over the summer, many teams from NBA, NFL, and other leagues protested in support of the movement through boycotts, kneeling for the anthem, and new uniforms or apparel. This has started a debate with those who agree with the athletes use of their platforms and those who believe the athletes should “keep politics out of sports“.

“While I do not believe that it is a good idea to involve politics in sports, I do believe that it is  important that those who hold significant influence over a large group of people, like athletes, should use their platform to speak out on big issues. I, personally, support these athletes and their decisions, as they are making an impact without resorting to violence. By kneeling, refusing to play, or even just posting on Instagram, these influencers are making a difference by spreading the word to their followers. Whether someone likes their decisions or not, people are continuously being made aware of the injustices that occur in our world everyday, and mostly due to stars and those with influence speaking out,” said Riley Rubio (‘23).

For the seven games of the US Open, two-time US Open winner, 22-year-old biracial Naomi Osaka wore masks that display the names of police brutality and hate crime victims, including George Floyd, Tamir Rice, and Elijah McClain. In a post depicting her Trayvon Martin mask Osaka said, “I know his death wasn’t the first, but for me it was the one that opened my eyes to what was going on. I remember watching the events unfold on TV and wondering what was taking so long, why was justice not being served. To see the same things happening over and over still is sad. Things have to change.”

In an earlier US Open game, Osaka received a video from the mother of Trayvon Martin and the father of Amaud Arbery, expressing their gratitude for her masks and her use of her platform.

Following the shooting of Jacob Blake, the Milwaukee Bucks breached their contracts by boycotting their playoff game on Wednesday, Aug. 26. The Los Angeles Lakers issued a statement in response saying,“Eighty percent of NBA players are Black men. We cannot love them for the joy and entertainment that they bring to the world, yet sit in silence and fail to use out platforms and resources to amplify their voices when they demand justice and equality that America has promised us all, but denied black people for too long.”

The WNBA postponed their games originally scheduled for Wednesday, Aug. 28, in response to the shooting of Jacob Blake. The four teams scheduled to play that day kneeled before leaving the court and boycotting their games. The Washington Mystics in particular entered the arena wearing shirts with seven holes on the back to represent the seven times Jacob Blake was shot.

The Mystics came into the arena wearing shirts with #JacobBlake's name on the front & holes in the back to signify the seven bullets that the 29-year-old black man was hit with by police in Kenosha, Wisconsin.

“I think it’s amazing how the athletes are using their platforms because athletes have so much influence over people, but especially in our age group. The fact that athletes are using their platforms to reach young kids is such a great thing because we will be the ones to make the change in the world, so we need to really learn about these topics. I don’t think that politics should be kept completely out of sports, but I do think there is the right time and place to showcase them,” said Elizabeth Menendez (‘22).

Three years after former San Francisco 49ers quarterback Colin Kaepernick was fired for kneeling during the national anthem, many other players have followed suit and sparked a similar controversy.

Across the league, NFL Players continued to bring attention to social injustices that have persisted in the Black community for many years. We stand by the players in the quest for equality. pic.twitter.com/SDSZf35HKk

As promised earlier in the summer, NFL games began with the “Star-Spangled Banner” followed by “Lift Every Voice and Sing,” which has been dubbed the Black national anthem. Many teams, such as the Kansas City Chiefs, have taken to linking arms or kneeling during the national anthem. This has rekindled the controversy over whether or not kneeling for the anthem is disrespectful to veterans, although it is not against the flag code of conduct.

Grace Cronen (‘21) said, “I think that people using their platforms, whether it be social media influencer, a talk show host, a singer, or an athlete, can be both beneficial and detrimental to their following depending on who that following consists of. For example, I’ve seen more hate towards the NBA and NFL than I’ve seen in recent years because, especially now with few sports on, people just want to watch their favorite games and don’t want politics to interfere with that. However, there have also been benefits for some teams or people such as the NHL’s viewership surpassing that of the NBA playoffs because the way the NHL has introduced politics into their games was not by attacking those who don’t agree but allowing all expressions of opinions. It truly depends on how it’s presented, who the viewers are, and what they want.”