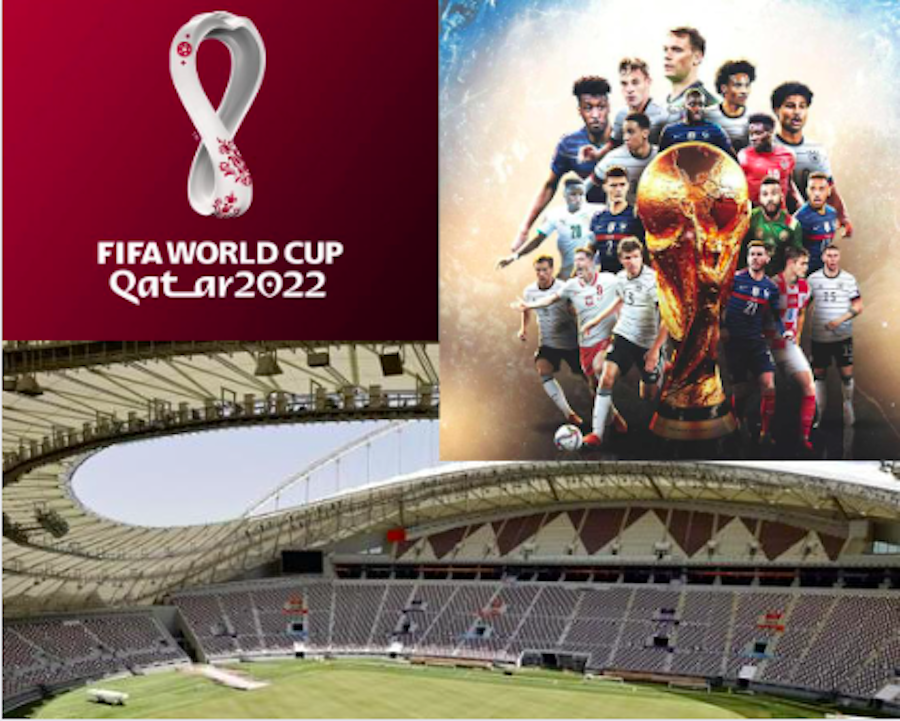 Pictured is the offical Fifa World Cup logo for 2022 as well as one of the stadiums that the teams compete in. The official trophy is surrounded by members of the countries that qualified this year. (Photo Credit: Genevieve Chiellini/Achona Online/Canva)

Pictured is the offical Fifa World Cup logo for 2022 as well as one of the stadiums that the teams compete in. The official trophy is surrounded by members of the countries that qualified this year.

As the teams get fewer and fewer, the last few rounds of the Fifa World Cup in Qatar are not far in the future. This matchup among soccer teams from all around the world only happens once every four years which is why it is all the more competitive. However, the teams must qualify for the World Cup so not all countries are represented. Only 32 countries qualify and these teams have fought hard to earn a spot to be in the last 16 and some are still fighting to qualify.

“I am German and have loved watching their soccer team compete in the World Cup this year. Even though I am rooting for the USA, it has been so cool watching both of them,” said Estella Colquett (‘23)

Netherlands, who defeated Qatar 2 to 0, have already qualified for the Round of 16 and also beat Senegal. Senegal has also made it to the last 16 since they beat Ecuador in a close battle with an ending score of 2 to 1. The teams above are all in the Group A table which is just a way to organize the teams for the World Cup.

For the Group B table, the United States has qualified to be in the final 16 as well as England. While their match was one for the books, it ended in a tie leaving the USA on the verge of being eliminated. England went on to defeat Wales 3 to 0 ensuring their way into the last 16 teams. The USA came out on top by beating Iran 1 to 0 and have moved on as well.

And just like that, the #Qatar2022 action in Group A and Group B is over

The knockout stages are calling 🤩

“My dad loves soccer and has watched almost every game of the World Cup. A lot of his predictions for teams winning and losing have been wrong which I think is crazy due to how much he pays attention. Just shows how a lot of games are upsets for teams,” said Sofia Miranda (‘23).

The Group C through H tables are now battling to qualify for the next round. However, some teams have not had the best of luck. Canada has been eliminated from Group F and will not move on any further. France (Group D), Brazil (Group G), and Portugal (Group H) have all qualified for the Round of 16.

Which of these teams will be joining France in the knockout stage?#FIFAWorldCup #Qatar2022

“I am most excited to watch the United Staes as they advance to the next round. I think it is cool how they were doubted and then proved people wrong, ” Amanda Chau (’23).

The last few matches of this round of the Fifa World Cup will be played throughout the rest of the week and will determine who goes home and who moves on. With high stakes and teams with nothing to lose, some upsets may be seen in the future as well as some surprising twists in matches.