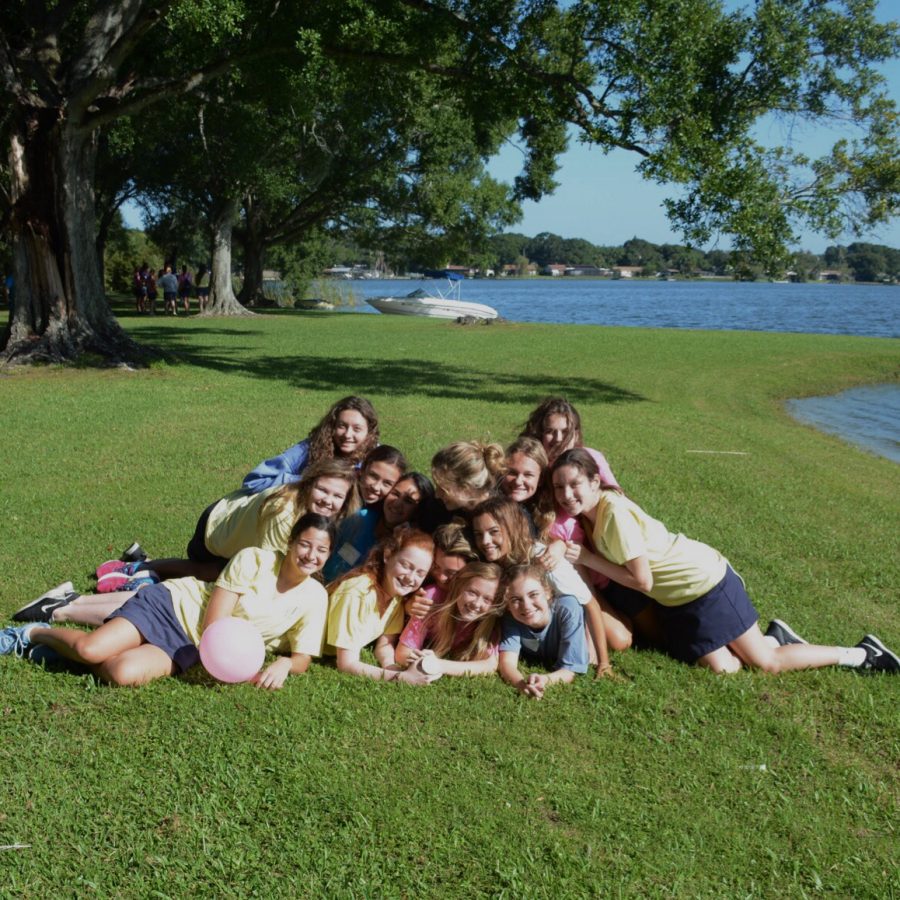 Sophomore Greta Dieck comments, “I think at the retreat, it was really evident that we have grown as a class by how we all treat each other.” Fellow sophomore, Megan Devaney agrees and includes that she can see how well “we all work together.”

In December 2015, the class of 2019 united as one through their unforgettable experience at the Bethany Center during their freshman retreat. Through the bonding of this retreat, the members of this class took major steps and have quickly blossomed into a close-knit group. However, these girls still had room to grow in faith and friendship. On October 18, the class embarked on a journey that would influence both their sisterhood and spiritual life.

The annual Sophomore Retreat at Academy takes place at Mary Help of Christians. This setting provokes a calming, yet serious atmosphere which allows girls to reflect on the theme of family and their relationship with God.

The eventful day began with fun bonding games to get the ball rolling. The girls then tuned in to listen to youth minister Kaitlyn. After sharing a few details about her life, such as her obsession with oreos and her recent marriage at Christ the King Church, she began to lecture the group on authenticity and self-worth.

Each and every of the 101 girls who went on this retreat became completely engaged when Kaitlyn shared with the group, “I know this is difficult to comprehend, but each and every one of you is made in the image and likeness of God. And you may be thinking, ‘Well if that is true, how special am I since God has also created billions of other people’…God has given you all your own talents and gifts which make each and every one of you girls unique!”

The class then gathered up into their small groups to examine the true meaning behind the incredible, mind-boggling talk they had just heard. The small groups moved on to the next activity which consisted of creating and advertising inventions, using scarce materials. Some of the groups performed skits to advertise their products, such as the “positivity pouch” and “beauty in a bag,” while others held a mini fashion show to present their line that made girls feel worthy and beautiful.

Sophomore Isabella Bahr conveys, “I think that the activity was a good way to take small things that are so irrelevant and make something funny or great. It also was a funny to branch out with girls we don’t commonly hang out with.”

Retreat leader Bridget Costello shared with the class the brief history and significance of some of the most fierce female figures in the Catholic Church. Inspiring the girls to be courageous in their faith and in one another, Bridget turned on “Fight Song” by Rachel Platten for the class to dance and sing to.

“I liked how she was able to build us up and make us feel like strong, independent women,” remarks sophomore Gloria Bufano.

Each of the small groups assembled to do one last activity, one that had much sentimental value. On a piece of paper, girls had to write down their proudest moments, best qualities, etc. There was a twist, however, when the sheets got passed around to everyone in the small group; each girl had to write down on one another’s papers an anonymous “love” note.

The sophomores then proceeded to mass, where they sang fan favorite, “Oceans.” Afterwards, some of the girls decided to stay in the Church to receive the sacrament of Reconciliation, while others went outside to eat lunch. Upon departure, the whole sophomore class came together for Adoration. All three of the celebrations in the church were filled with the lively, vibrant energy that the sophomores provided.

Sophomore Rebekah Eicholtz comments on the power of the class’ faith in the church during that retreat: “The part that I loved was when we were closing up mass and singing songs before confession. There was some sort of unspoken connection that everyone felt while we prayed together. Everyone was together, as one whole, for the first time.”

The sophomore class left Mary Help of Christians with a sense of integrity and faith, both in Jesus and in theirselves. Although this class has only been together for a year and a half, the girls in this class have begun to see the group as a large, loving family.

Jaclyn McCauley, on behalf of her sophomore sisters, describes the evolvement of this class: “I think that sophomore year has really brought us closer together. I think that a lot of people now have classes with people that they barely knew last year and that leads to new frienships and more connections.”

The class of 2019 is taking small, yet major steps into becoming the cherished sisterhood that is celebrated at Academy.