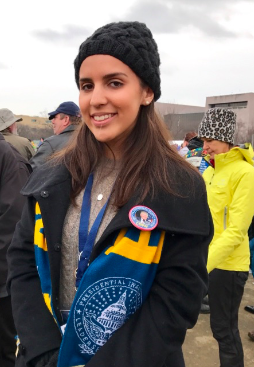 On inauguration day, temperatures dropped all the way to 37 degrees. Credit: Evan Greek (used with permission)

On January 20, 2016, President Donald J. Trump was sworn in as President of the United States along with Vice President Mike Pence in front of an audience of roughly 1 million people.

Among this audience stood Academy junior, Evan Greek. After recently joining the class of 2018 this year after moving from Houston, Texas to Tampa, Greek, through a leadership program, had the opportunity to witness the historical event in Washington, D.C..

Upon returning from D.C., Achona received the chance to speak with Greek about her Inauguration experience:

How did you get the opportunity to attend the inauguration?

“A few years ago, I did well on my PSAT, so I was invited to a program called Envision. I originally went to their program called National Youth Leadership Forum for Medicine because I had indicated my interest in medicine on the PSAT. After that, they sent invitations for every program that was relative to my interests. I was invited to Envision’s Inaugural Leadership Summit this year.”

How did you decide between attending junior ring or the inauguration?

“Before I knew I was moving to Tampa, I signed up for the program. When I found out I would miss the ring ceremony, I was disappointed, but excited to witness a historical moment.”

What did you first do when you arrived in D.C.?

“I arrived at the airport and found the Envision group. We checked in and waited for a shuttle, then went to the airport. It was a really long afternoon registering because the program had about 2500 kids in 4 different hotels. I got to know my room-mate and people in my small group. We had dinner, and then broke into small groups to start working on our projects. My group’s topic was Women Seeking Power and Leadership.”

What was it like arriving to the event itself?

“We woke up at 3 am to get breakfast at 4 am, and left the hotel by 5. We arrived at the Smithsonian Museum of Natural History at 6:30ish to get warm, and it was actually really cool because the program had an arrangement with the Smithsonian to let us in the museum before it opened. We got to walk around and then around 9am we started walking to the National Mall. We got there around 9:30 and found a spot. There were so many people and it was really cold.”

”The security was noticeably heavy as soon as we drove into downtown D.C. There were army vehicles at every street and the police and military presence at the actual Inauguration was heavy. There were gates surrounding the National Mall and you had to get through two security points to get to the actual place where you can stand.”

Walk us through the ceremony itself

“Before the actual ceremony, the announcer announced the Obamas, the Trumps, and people that came with them. There were a few speakers and several groups sang. Then, someone introduced Pence, then VP Pence was sworn in. Someone introduced Trump, and then President Trump was sworn in. Both ceremonies were pretty short and didn’t last more than 3 minutes. Then President Trump gave his speech and it was pretty good and short. Then we left!”

Did you see any protesters?

What did you gain from this experience?

“Overall, I actually became more passionate about women’s issues. I met a lot of new people and getting to see the Inauguration was a special experience. I am really glad I went and would encourage anyone that has an opportunity in the future to go!”