What To Do Without the Media Center

“I used to go there during lunch and after school to wait for my mom. I am trying to adjust to the changes, and I wait outside now. I am waiting for the Arts Building to open so that I have somewhere to go again,” says Chanita Belcher.

Academy’s library was first relocated to the Robert Healy Media Center in 2003, when the building was newly constructed. The building originally included three computer labs, a language lab, a video production studio, and an office. In 2015, the three computer labs were taken out and replaced with a middle school iLab. Now, the Media Center is being changed again; this time into the middle school. With all the construction changes happening now, students may be confused on where to go for some of their classes.

Where should students print their papers now?

High School students can continue to print to the “Media Center B&W” printer which has been relocated to the second floor lobby. There is also a printer in the fourth floor Guidance office that the students can use.

Where should students go during study halls and independent study?

Independent study students are now checking in with Guidance. For study hall, seniors may go to the Senior Lounge, and any other excusals from Study Hall are determined by the Study Hall teacher.

Where will the Media Center staff be located now?

Cyd Stewart now has a desk in the High School office. Michele O’Loughlin will be located in the Elementary School office. Emily Swiger is now located in the Middle School wing in N217. They will continue Battle of the Books contests, Readers’ Advisory Lunches, research instruction for classes, Lower School weekly library classes, helping with audiovisual equipment, and all the same programming that they have had planned for April and May.

Swiger says,”We hope everyone keeps in mind that they have access to librarians and digital resources even though the print collection will be in storage for these two months. We are excited about the new spaces which will open in August. All of the books will be returned from climate-controlled storage and will be accessible in a centrally located, High School-only collection in S201.”

Where have classes that took place by the Media Center been moved to for the rest of this year?

“I am not a fan of losing the junior locker room because it gave our class a place to relax before school together. It also felt like a rite of passage since the past Juniors have always been protective over it” says Junior Olivia Traud.

Students are now allowed to go to the Bailey Arts Center lobby after school to study and and just relax after school. The area will be supervised from 3:30 P.M. to 5:30 P.M.

“I used to go to the Media Center during lunch and after school to wait for my mom. I am trying to adjust to the changes, and I wait outside now. I’m waiting for the Arts Building to open so that I have somewhere to go again,” says Chanita Belcher. 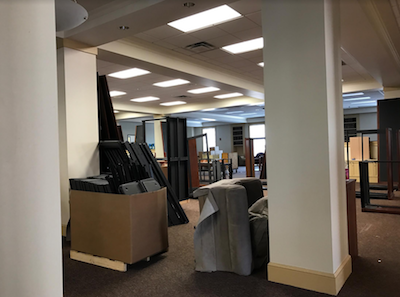