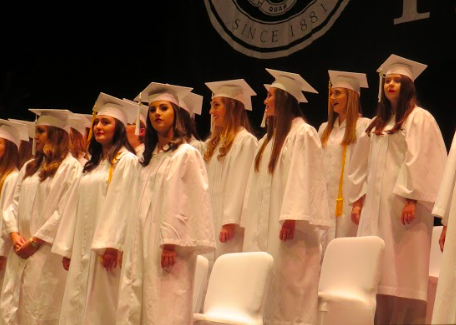 The traditional white cap and gown has been used at all AHN graduations. Photo Credit: Sara Phillips/AchonaOnline

On Thursday, May 25, at the Straz Center for the Performing Arts, the 110 members of the Class of 2017 received their diplomas and officially said goodbye to the Academy.

Before receiving their diplomas, the graduates listened to Salutatorian Kendall Bullet’s speech, a reminiscence of their four years incorporated into her personal connection to the tradition of keeping the same shoes until graduation and spray-painting them gold – a symbol of the priceless memories contained in worthless, duct-taped shoes.

After Kendall’s speech, the well-orchestrated “Beth Chase production” began, and the Class received their diplomas, accompanied by the always-adorable first-grader Academy flower girls, who handed over a bouquet of red roses to each graduate.

After Vice Principal Erin Krukar announced that the Class of 2017 had officially graduated, Valedictorian Elizabeth Dolan delivered a unique speech in the form of a poem, expressing her love for her classmates and inspiring graduates and audience-members alike to stand up to the sexism that the graduates face outside of Academy’s walls.

“It took me about an hour to write my speech. I locked myself in my dad’s office and sat on the windowsill, thinking about my experiences and taking inspiration from a Harvard graduation speech that was a SLAM poem,” said Valedictorian, Lizzie Dolan.

Senior, Anna Padron, said the most nerve-racking part of graduation was knowing the weight of the ceremony and feeling like messing up would “infringe on all the previous years of tradition.”

Luckily, there were no major mess-ups, and after President Art Raimo’s closing remarks, the graduates were free to celebrate their four years and look forward to the bright future ahead.