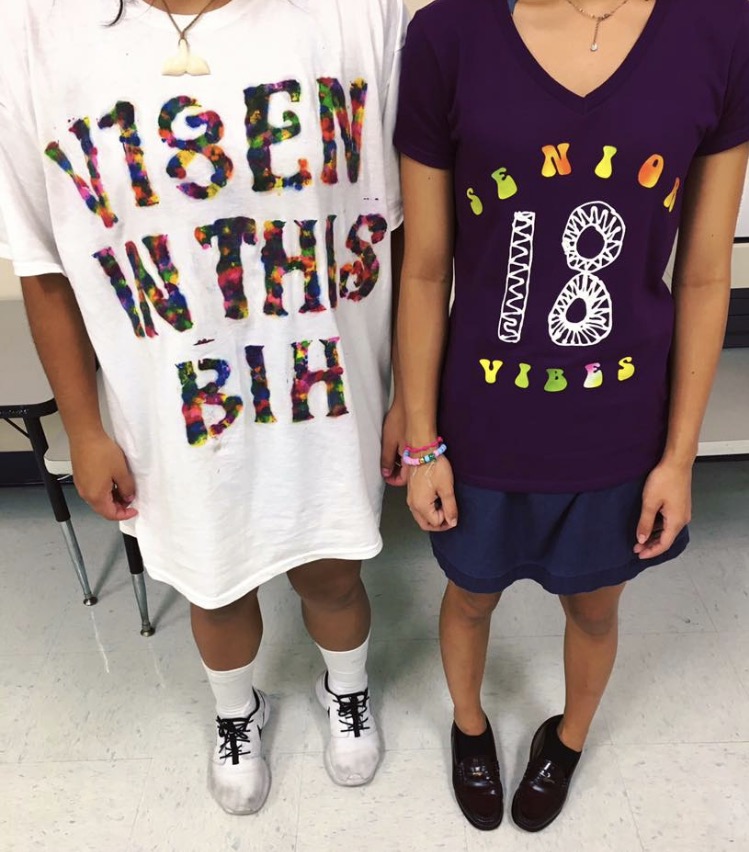 Seniors Vanessa Davila and Gillian Garcia take on a vibey twist for their senior shirts.

The members of the Class of 2018 have come together to follow tradition and create unique senior shirts that are telling of themselves and their personalities.

Olivia Traud (’18), put a modern spin on the typical tie-dye routine by using ice in the process to create her senior shirt.

Traud says, ”I saw the idea on Pinterest and saw how it was quicker and sometimes had a different pattern depending on how you folded or scrunched the shirt. Some colors bled together but it turned out better than expected. I used blues, pinks, reds, and purples to create a unique the dye shirt. The colors mixed really well and this process saved a lot of time.”

Kelsie Killian (’18) decided to create a shirt that displayed the stages of her high school experience.

Killian says, “My senior shirt is inspired by the stages of my high school experience and I used these pictures of SpongeBob, because I felt they are relatable to me and how I feel each year of high school until graduation, which is demonstrated by SpongeBob forming a rainbow.”

Seniors Gabriella Jordan, Talia Sharrieff, and Alexis Alvarez, who took Mr. Bland’s statistics class during their junior year, were inspired to create a shirt with his face displayed on the front.

Jordan says, “Mr. Bland is my favorite teacher and only three other seniors have had him, so I wanted to show everyone else how great he is.”

Gracie Wipfli (’18) created a shirt based off a class “meme” that features classmate Mia Torres. Torres was jokingly photographed by friends when she fell down the main staircase of AHN after a Geometry exam, and decided to just sit there, cry a little, and laugh at herself.

Wipfli says, “I was inspired to put Mia on my shirt because I feel her mood in the photo is going to be my mood all of senior year, especially because I already have senioritis.”

Elizabeth Diaz (’18) took inspiration from one of her favorite music artists, The Notorious B.I.G.,and the class theme of “V18ES”.

Diaz says, “Notorious B.I.G. is super chill to listen to and I liked the idea of a beach shirt for the V18ES class theme so I combined them and ended up with Notorious V18ES.”

Swenson says, “I love DJ Khaled and think he’s hilarious, so I thought it would be a funny idea to put him on my shirt and make a pun using some of his song lyrics.”

Additionally, Evan Greek (’18) and Bella Kirkpatrick (’18) got the idea to create “Kandi Bracelets” with some of their favorite words and phrases and decorated them with various colorful beads.

Greek says, “Bella and I were talking about the cute beaded Kandi bracelets and wanted to make some. Then we thought it would be cute if it became a senior class thing so we posted it on the class Facebook, and the rest is history.”