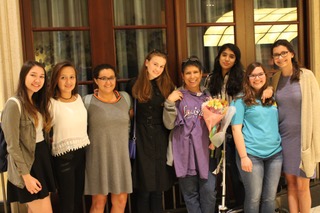 A group of seven girls along with coach Jamie Meyer traveled to Louisville, Kentucky to compete in a national tournament.

With new members, new plans, and new leaders, AHN’s Speech and Debate Team has started off the year “with a bang,” says sophomore member Sofia Tweed.

“We have been moving faster in progress than ever before. Not only have we gained new members and elected officials, but we have already successfully competed in a meet this year.”

On Oct. 14, 2017, three team members competed at the first tournament of the year at Dixie Hollins High School.

Freshman Adriana James-Rodil was one of the competitors. Despite having been in the club for only a month, she decided to write a speech and participate.

“Going to the tournament was an enriching experience that educated me on the world of Speech and Debate. There were a lot of really talented students competing, which intimidated me at first, however as the tournament went on my confidence grew,” said James-Rodil.

Not only were students able to compete, but many new members were also able to observe their fellow teammates and competitors.

Tress Jacobs, a new sophomore to the team, observed the last meet.

“I loved watching. It was so much fun getting to see different people speaking and performing. Since I had never gone to a Speech and Debate tournament before, it was so interesting to see people really get into their pieces. It was a great learning experience and I can’t wait to start competing in them,” Jacobs said.

Students, who were observing events, were able to learn skills and gain ideas from others who were competing.

“It’s a great way to learn how to speak,” says Tweed, “You get to watch experienced kids before you compete. That way you know exactly what you’re doing when you are a competitor.”

This past summer, Plum received her seventh diamond award for her dedication to many years of coaching students. In 2006, Plum was inducted into the Nation Speech and Debate Association’s Hall of Fame.

“I’ve been so blessed to witness this amazing growth and hear the name of our school more and more frequently during the award ceremonies. I’ve seen so many girls grow confident and learn about themselves. It is a true testament to esse quam videri. Hopefully, this trend continues and our debate family gets even bigger,” said Khan.

Last year, the team had various achievements. This includes seven girls qualifying and competing in the annual National Catholic Forensic League Tournament, and one student in the Nation Speech and Debate Association Tournament. Both of these competitions occurred over the summer.

However, these accomplishments will not stop members from continuing to grow.

Vice President Kelsey Barton (’19) has already been in planning for the coming year, “My plans are to encourage and support all the members that are developing their skills in whatever category they plan to compete in. I want so badly to help them step out of their comfort zones and try new things without being afraid of making errors. I just want the girls to realize that making mistakes is a part of Speech and Debate.”

Not only has the team nearly doubled in size this year, but it has expanded into many new categories including Lincoln Douglas Debate, Policy Debate, and Public Forum. These categories are some that Academy students have not competed in during past years.

“Debate is a fantastic way to educate yourself and get involved in current events, and it also helps tremendously in articulating your arguments in a concise and efficient way. These are amazing life skills to have at your disposal,” says Barton.

Despite the growth in size, the team is still looking for new students to join.

“I would highly recommend other AHN students to join speech and debate. You get to meet new people and learn how to not only speak but to persuade and argue,” said James-Rodil (’21).