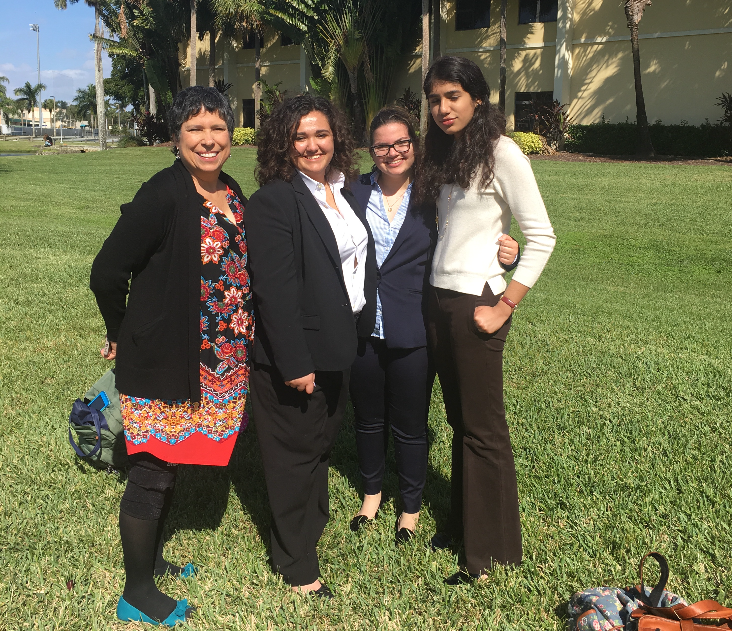 “Watching the other competitors who broke helped us with our own performance. Their actions, moves, and sound effects inspired us to improve,” says Salgado.

On Jan. 13, 2018, three speech and debate team members traveled to Fort Lauderdale for the annual Sunvational Tournament at Nova Southeastern University. The competition is also referred to as “Sunvite.” Hira Khan (‘19), Audrey Gabbard (‘19), and Bella Salgado (‘20) were the students who participated. The girls were joined by religion teacher and speech and debate coach Jamie Meyer.

The Sunvite tournament started eleven years ago and runs annually in January. The 2018 competition had over 1,000 entries with “people who were the best of the best,” says Salgado.

“Sunvite was a really enriching experience. I was able to learn, bond with Audrey and Hira, eat amazing food, and have a lot of fun,” Salgado said.

“My time at Sunvite was really eye-opening, I was able to meet and see such talented motivated competitors, who were just as passionate about speech and debate as I am,” says Khan who is the president of the speech and debate team.

Khan competed in the category Extemporaneous Speaking, or Extemp. Students competing in this category have limited time to prepare a ten-minute speech regarding domestic or international politics. The competitor learns of their speech topic thirty minutes before they must present it.

Salgado and Gabbard competed with one another in the category Duo Drama. Students competing in Duo Drama work together as a pair to play multiple characters in a skit, play, or excerpt from a book or movie. Salgado and Gabbard performed a humorous skit titled, “Fat Kids on Fire” by Bekah Brunstetter.

“Our piece was about a girl named Bess who goes to summer camp and befriends a girl named Sydney. They bond over their problems and social interaction issues. It really is a funny comedy,” says Salgado.

Throughout the day, the girls went through five rounds of competitions. Gabbard and Salgado performed their piece five times, and Khan spoke about a new topic each round.

“It’s really nerve-racking when you first perform your piece, however, everyone else around you is nervous too. Since your going through the same the same thing as other competitors, you gain confidence,” says Salgado.

Although no Academy girls “broke,” or moved on to the next set of rounds, they were able to then observe the competitors who did.

“It was really enlightening for me personally, as it gave me an idea of where I stood in regards to the competitors, what I needed to improve, what I needed to do more or less of, and what I had the potential to do,” says Khan.

Posted by The Sunvitational on Sunday, January 15, 2017

The competition ended on Sunday, Jan. 14.

“Overall, I would recommend this tournament to all members [of speech and debate] because it was just such an enriching and enjoyable experience,” said Khan.

The next speech and debate tournament will take place Feb. 3, 2018, at Dixie Hollins High School.