Analyzing the Sexism Behind “You’re Not Like Other Girls” (EDITORIAL) 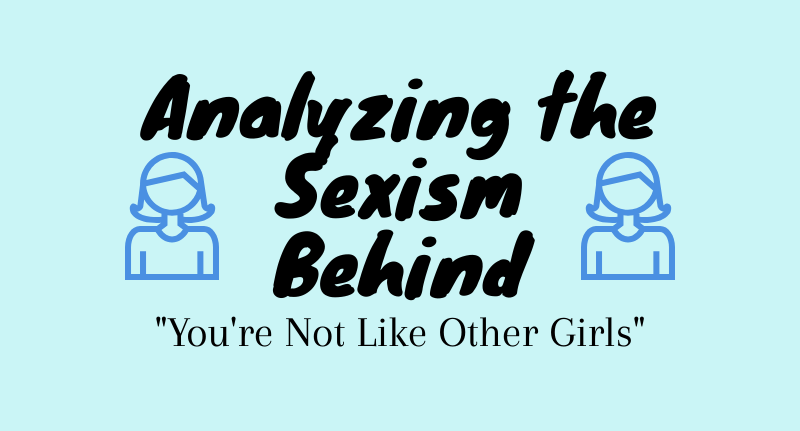 Women face not only stereotypes throughout their lives, but also objectification, which men and the media perpetuate.

In today’s world, stereotypes dominate the lives of women everywhere, especially when it comes to their interactions with men. Whether through personal experience or the media, society ingrains gender roles into the minds of all women. One dominant example of this influence is the common use of the statement, “You’re not like other girls.” The question is, what does it mean to be or not to be “the other girl?”

Sofía Tweed (‘20) said, “As women, we need to be advocates for the uniqueness of every individual girl. Why should anyone expect for women to all be the same when each woman is the only ‘them’ that will ever be on this Earth?”

As a result of cultural norms, men expect women to fit into specific gender roles assigned to them by society. These stereotypes confine women to an image illustrated with a pretty face rather than intelligence and capability. Thus, when women prove to be more than just trophies, men use “the other girl” stereotype in order to “praise” women for exceeding their expectations. In reality, these “expectations” are the result of the media’s depiction of women as airheads who are incapable of being anything more than beautiful.

This misguided flirting tactic perpetuates the standards women believe they must conform to in order to be deemed “popular” or “attractive.” When men think of women, they choose not to look beyond their own shallow assumptions, which depict women as being obsessed with their physical appearance and their popularity. Hence, when women display their intelligence and talents, men act amazed.

Arianna Cortes (’22) said, “I think men act amazed by the accomplishments of women because they are not ready for women to take over the world, which is what we are currently doing.”

this horrendous take is brought to you by the official sponsors of "you're not like other girls" https://t.co/1BZopLu4Mk

When women are told that they are “not like other girls,” men diminish the capability of all women. Men encourage women to believe that it is abnormal to act in a way that is different from the superficial image society forces upon them. As a result, women begin to associate one personality type and appearance with the label “that girl,” which encourages a negative outlook on other women. Although women should support other women, society seems fixed upon dividing us rather than uniting us.

Colleen Duffy (‘19) said, “The phrase ‘you’re not like other girls’ makes me angry because when boys use that term, not only is it turning women against each other, but it also creates a stigma that you have to be different for a man to like you.”

Therefore, it is important for women, especially young girls, to understand that being labeled as “that girl” or “the other girl” holds no power over their value as a person. A woman’s accomplishments should not be belittled by a sexist label coined by men and the media. Rather, for her efforts, she should earn the respect of society, who must learn that it is normal for women to exceed the degrading stereotypes that surround them.

Duffy said, “I think that women should be like other girls because when a girl believes she is not like other girls, it’s putting down every girl who does something that is considered ‘like a girl.’ An example would be when someone doesn’t wear makeup, and they believe they’re better than people who do wear makeup because they have the ability to feel beautiful while being natural. They claim they ‘aren’t like other girls.’”

In reality, the young women of Academy, as well as the women of the world, are people who are defined by much more than society’s definition of femininity. Instead, our strengths, as well as our weaknesses, define us. Our various talents are proof of the abilities society implores us to hide, and they shape us into the accomplished women that we are becoming. As women, we should not feel pressured to shape ourselves to fit into the “perfect” stereotype promoted by the media. Overall, we must be ourselves in every way possible, which requires looking beyond the labels.

In an effort to dissipate these labels, this introduction will pave the way for more articles acknowledging the accomplishments of the young women attending the Academy. As our school motto states, we must rise above the standards of society in order “to be, rather than to seem.”