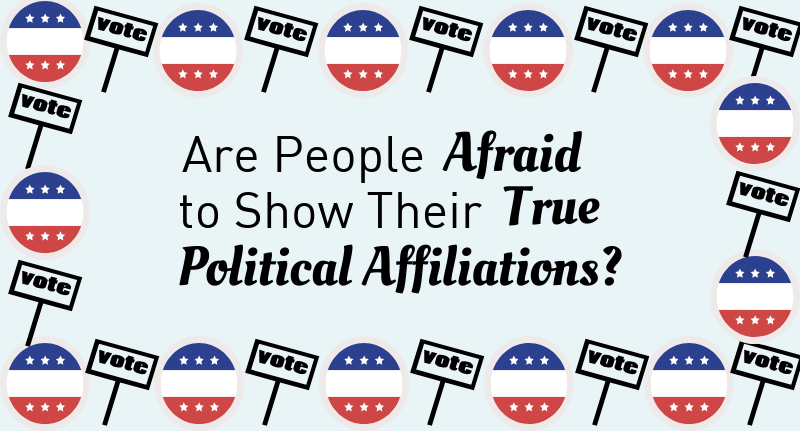 Are People Afraid to Show Their True Political Affiliations? (EDITORIAL)

In this modern era of social media, the nature of politics countinues to evolve with technology. Platforms, such as Twitter, allow users to voice their true opinions on any issue imaginable, giving it a large role in the political discussion. According to Pew Research Center, “one-in-five social media users have changed their minds about a political issue or about a candidate for office, because of something they saw on social media.” President Donald Trump himself not only utilized Twitter as a campaign strategy, but also continues to use the app during his presidency.

Tess Ricco (‘20) said, “I think that Twitter has definitely changed politics because it is a place where a lot of people share their opinions. Also, it is a bigger platform for young people.”

Although everyone has a right to express their personal opinion, the growing hostility between parties due to platform differences promotes conflicts rather than solutions. As a result of the combative nature of people when it comes to politics, some people may feel intimidated to reveal their true stance on a controversial issue. This fear may even prevent people from declaring their true party affiliation and perspectives on key debates.

Samantha Miller (‘20) said, “It is scary to show your political affliations because you never know what people are going to say in response to your beliefs. Especially at an all-girl school, you never know what your fellow classmates or teachers personally believe and what they might say. As teenagers, we tend to argue a lot as well.”

This fear of retribution, especially in terms of politics, causes an immense amount of harm to our society. When people fear judgement from their peers, they contribute less to the conversation that explores potential solutions, decreasing the amount of outlooks on pressing issues.

It horribly sad that we live in a time where we’re afraid to show our political affiliation or support for the president. People should be free to express their politics without fear of violence, harassment, or property damage.

Among Academy students, this fear is evident. Despite the presence of a wide range of perspectives, when teachers or peers ask students about their stances on various issues, many choose to remain silent. Several girls, when asked for a quote about current events, state that they do not want their name to be associated with poltics. While this is their right, why has this become the automatic response of citizens across the nation?

Maddie Chandler (‘19) said, “I feel like I am afraid because I don’t always know what other people’s views are. I’m always afraid I’m going to offend someone by stating my beliefs.”

Other students believe that their classmates’ overall perception of the viewpoints of the student body affects the openess of others about their political views.

Maria Hurtado (‘19) said, “I think that there’s this perception that the student body is generally liberal or leaning left. In reality, it’s [school] not a safe environment to voice your political opinon because if you do, you get talked about behind your back by other girls. Students do not care enough to have an actual discussion about politics because people are so judgemental.”

On the other hand, when the youth of our nation do decide to speak up, society criticizes them for their opinions. Our peers assume that we are simply reiterating the stances of our parents, or that we are not truly educated about a topic. However, with the development of technology, the youth of today do not only have access to social media, but also a tremendous amount of information, making them perfectly capable of doing the research necessary to form their own beliefs. With this in mind, people, especially adults, need to stop doubting the capability of young people and their political opinions.

Olivia Martinez (‘21) said, “I think that parents do not always play a role in the political views of their children. However, in some cases, they do play a pretty big role because it’s the way in which you were raised. I think it really depends on a person’s status in general and financially, which can play a role in where they side politically.”

Furthermore, the stigma surrounding specific political parties affects the confidence of students when discussing their positions. Currently, this is evident in the nation’s attitude towards the Republican party. Although it is impossible to agree with a party on every stance, those who identify as Republican are often faced with criticism. Even at Academy, those who side more closely with the Republican platform may feel uncomfortable or reluctant to express their feelings on political circumstances due to the disagreement they may face. That being said, those who agree more with the platform of the Democratic platform may hold the same fear of being branded a “liberal,” a term that has become quite derragatory in recent years.

An indication of intelligence, and higher awareness imo… it's best not to "self identify" or label one's self as fitting into a category of political affiliation. Your stance allows you to question all angles, agendas, motives, and issues with a more broad/open perspective

Caitlyn Asher (‘19) said, “I feel like people don’t state their political opinions because they think they will be judged for an opinion, which I don’t think is fair. Depending on the environment, this is definitely more directed towards Republicans in my opinion. The same could be said for the other side too though.”

Overall, it is important for our nation as a whole to move away from stereotyping political parties as a whole due to the actions of their leaders. Therefore, we need to develop minds that are more open to the beliefs of others. In order to do this, we must first understand that being “conservative” does not automatically mean that a person supports a specific leader, and that being an avid supporter of gun control does not mean you should automatically be branded a “liberal.” Overcoming assumptions such as these will lead to an environment in which all people are comfortable with expressing themselves and their opinions.