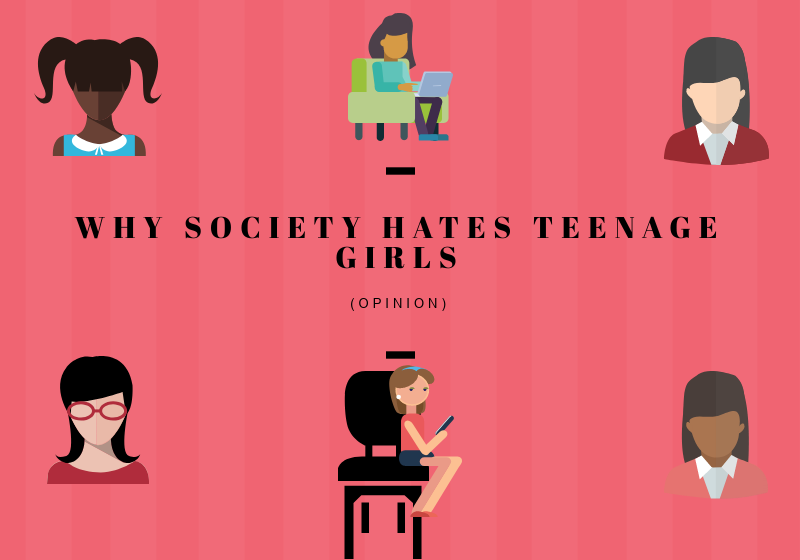 According to feminist writer and activist Bailey Poland, discussions of teen girls characterized by their “crazed obsessions” often seem to be ripped from 19th and early 20th century attitudes about female “hysteria.”

As young women growing up within an environment which is plagued with widespread criticism and negativity as a result of the internet’s accessibility, being confronted with the idea that society perpetuates the demonization of teenage girls should come to no surprise. Within modern society, making fun of young women and the various things that they may enjoy seems to have become the newest “trendy” joke.

There have been many instances which exemplify the way society mocks “teenage girl culture.” These can range from the more mundane teasing of the “Pumpkin Spice Latte” phenomenon to the more impactful way that society devalues certain forms of media or pop culture simply due to the fact that their primary following consists of teenage girls. Things such as certain books, movies, T.V. shows, and even various forms of music, can fall privy to the judgmental gaze of society due to their target audience centering on teenage girls.

One integral example of this concept can be seen in the mid-2000’s “Twilight” surge. Though “Twilight” may have had many reasons to be criticized as a franchise, such as its perpetuation of abusive relationships, much of the criticism it did receive seemed to be predicated on the idea that it was “stupid” or “cheesy.” However, this was not simply your run-of-the-mill franchise criticism; the hate that “Twilight” received was vehement and over-exaggerated. “Twilight’s” screenwriter may have put it best in her statement regarding the franchise’s backlash from an interview in 2012.

“We’ve seen more than our fair share of bad action movies, bad movies geared toward men or 13-year old boys. And you know, the reviews are like okay that was crappy, but a fun ride. But no one says ‘Oh my god. If you go to see this movie you’re a complete [redacted] idiot.’ And that’s the tone, that is the tone with which people attack Twilight,” said Melissa Rosenberg.

The unreasonable hatred for Twilight is pure sexism. There have been terrible films directed towards men that haven't got half of that hate that series has gotten. And you'll see people deny that the volume of hate isn't sexist and those people will always be dead wrong.

It is in this precise way that the issue at hand presents itself; people are not criticizing things such as this for valid, logical reasons. Instead, they, even if it may be subconsciously, choose to focus on the way in which the media appeals to teenage girls, allowing the negative connotation to be portrayed through this so-called “critique.” This, subsequently, perpetuates the idea that it is okay to trivialize a thing with the sole purpose being rooted in misogyny. It turns something otherwise harmless, such as mindless criticism, into something sinister in nature due to the impact it can have on how people continue to think and act around us when it comes to the treatment of young women within our society.

The sad part is, that this issue does not simply end with something like the “Twilight” series, but in fact presents itself, perhaps even more significantly, in things such as the “boy band” phenomenon. It is not news that the primary audience of all “boy bands” happens to be groups of teenage girls. Many people criticize “boy bands” for their lack of musical integrity, mostly due to the fact that most of these bands do not write their own music and are performers more than anything. However, the deeper you look into society’s vehement disregard for the value of boy bands, the clearer the root of the problem reveals itself.

A good example of this happens to be present in the popularity of the Australian pop-rock band 5 Seconds of Summer, or 5SOS for short. The boys of 5SOS began gaining popularity when they were asked to open for One Direction’s “Midnight Memories” tour. Though the band does in fact write their own music and play their own instruments, due to the traction they gained with young girls, they were immediately put into the “boy band” category. This occurrence on its own may seem trivial at best; however, the inherent misogyny surrounding the band’s culture became especially significant when they were featured in an issue of “Rolling Stone”.

When addressing the fact that the question the boys hate the most is, “Are you a boyband?,” one of the members, Ashton Irwin, proceeded to make a comment which insinuated that their value as a “real band” did not exist until males started listening to them.

“Seventy-five percent of our lives is proving we’re a real band, we’re getting good at it now. We don’t want to just be, like, for girls. We want to be for everyone. That’s the great mission that we have. I’m already seeing a few male fans start to pop up, and that’s cool. If the Beatles and the Rolling Stones and all those guys can do it, we can do it too,” said Ashton Irwin.

Though this statement may have been made in meaningless fun, the insinuation that their value as a band is dependent on the traction they receive amongst a male audience is supremely toxic. It perpetuates the idea in the minds of young girls that their opinions are valued less than those of men simply because of the value society has placed on teenage girls, a concept which can carry itself into a adulthood, resulting in internalized misogyny.

“I have 100% been judged for liking the things that I do simply because I am a teenage girl. I hate that people think that boybands are just for girls. It’s for anyone who likes their music and relate to it. I, for one, love One Direction and love how they’re accepting and loving to all their fans. Boy bands aren’t just for girls, and it’s just stereotypes that make people think they are,” says Chanita Belcher (’19).

the fact that 5sos aren't seen as a serious band bc most of their fan base is female, is just one tiny, minuscule example of sexism

As one person so blatantly put it, teenage girls happen to be affected by both ageism and misogyny. Their oppression stems from both the fact that they are young and because they are girls. In this way society seems to fail them. If we do not assure women at arguably the most formative time in their lives that their opinions hold the same value as the men around them, then how can we ever hope to achieve the equality which everyone, especially society, talks about so much? It is the duty of the media and society to start evaluating exactly why they “hate” so many of the things which are loved by teenage girls, because the reality lays in a basis of misogyny which no one seems to question.

“If I had to give an opinion on it, I think that society loves its stereotypes, and I think that those stereotypes present themselves significantly in the way they seem to portray teenage girls. There’s definitely a perception that if a certain thing gains traction with teenage girls, it is most likely a shallow, “basic” form of enjoyment. I hate this depiction because it both takes away from the valid opinions of an entire sect of people, while also potentially ignoring the things which might actually be wrong with that thing. In its entirety, I think society needs to address the root of the problem, which is their inherent cycle of misogyny,” said Laurèn Colquett (’21).