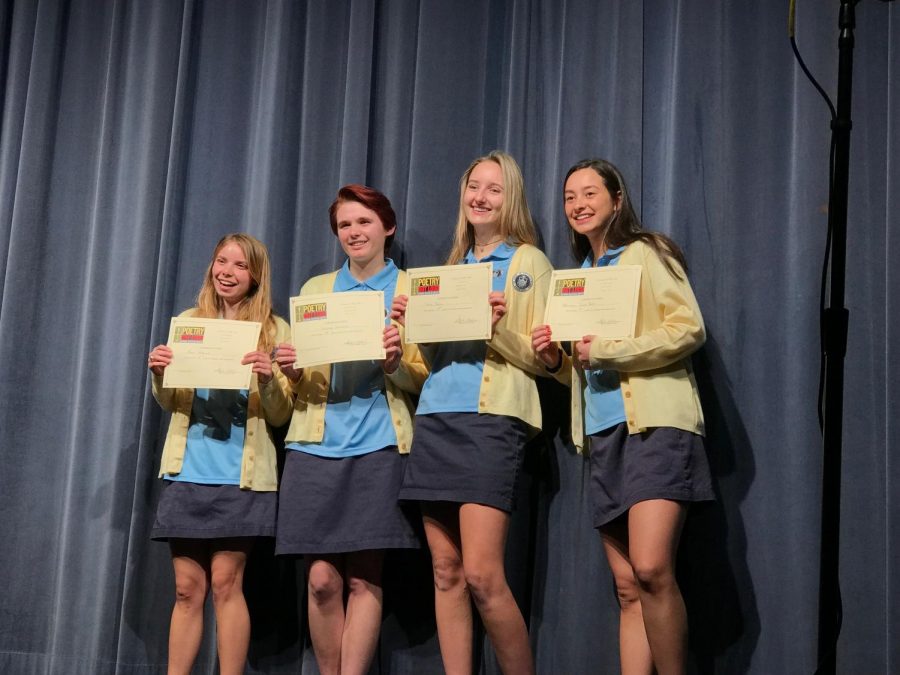 January is an exciting school month for some AHN students, but to others it is the most dreadful of all thanks to Poetry Out Loud.

Poetry Out Loud is an annual competition that starts with each student reciting a poem in front of their classmates. From there, a student from each grade is selected to represent their class to compete in the school run-offs. The winner then moves onto a state competition and potentially the national competition in Washington D.C.

Posted by Academy of the Holy Names – Tampa on Wednesday, January 30, 2019

After the recitations, ACHONA had the opportunity to speak with each contestant about the competition.

1. Which poems did you pick and why?

Reins: My first poem was “Interlude” by Amy Lowell, and I picked this because it started out happy and then turned to a deeper meaning of being unfulfilled with the way you live your life, and I didn’t relate to it at all, but it was a fun challenge. My second poem, which was my favorite, was called “Bright Copper Kettles” by Vijay Seshadri. It’s very confusing but it’s about this girl seeing dead loved ones in her dreams and being happy to see them, which I don’t relate to either, but I picked it because I delivered it in a happy way, and my other poem was serious and sad so they were different.

James-Rodil: I picked “El Olvido” by Judith Ortiz Cofer and “Domestic Situation” by Ernest Gilbert.  I truly take the time to choose poems, and I make sure I understand and really like and appreciate them because if I don’t, then I know I will not perform them well. Firstly, I choose “El Olvido” because it had a good theme, and, without initially knowing, it is by a Puerto Rican poet and I am from Puerto Rico. I also related to the theme of the second poem because I am a woman, and I felt it would be good to recite it since it is an all-girl school.

Kivenas: My first poem was “On the Death of Anne Brontë” by Charlotte Brontë. It is a deep poem and I wanted one that had a lot of meaning and emotion to it. The other Poem I performed was “Possible Answers to Prayer” by Scott Cairns which is spiritual and I thought it was interesting because it was prayer related.”

2. What do you do to practice your poems and remember them? Do you have any tips for the AHN Students?

Reins: I would write my poems on a notecard, memorize two lines of the poem, and do them in the mirror. Once I felt solid about those lines, I would add two more. I practiced my poems consistently throughout the day once I learned I would be doing them in front of the entire school. I tip I have is to repeat the poem multiple times, and once you have it fully memorized, then you start working on the way you are going to preform it.

James-Rodil: I’ve had practice memorizing speeches and pieces similar to poetry because I am a part of the Speech and Debate club at AHN, so overtime I have found what works for me. I memorize the first line of the poem and recite it out loud several times until it is “glued” in my brain. Then, I move onto the next line, and once I have memorized the second line, I recite both the first and second lines together and so on. That works for me, but everyone is different, so if I were you, I would experiment with what works for you. For example, some prefer to just read their poem over and over again.

Kivenas: As I was trying to learn them, I would type out each line on the computer and then say them in front of the mirror to practice my faces and emotions. It is important to not get frustrated because it is going to happen while preparing.

Lowman: I would go line by line and say them out loud until I got it, not in segments, but the whole thing over and over and recite it until I got it. I know some students like to go on Quizlet and match each line with the line number so that is a good strategy for some students.

3. How did you feel when saying the poems in front of the school? Were you nervous? Confident? Excited?

Reins: My legs were shaking when I was walking on stage, because I was the first one to go and I was terrified. I don’t remember how I did my first poem because it went by so fast and I was so nervous. But once I had done my first poem, I wasn’t that nervous anymore, and I was excited to go on the stage again.

James-Rodil: Last year, I was the representative of the freshmen class, and I remember being very nervous then. My legs were shaking last year; that memory is still vivid in my brain unfortunately. But, this year, for some reason, I felt more relaxed and in control. I was a bit nervous up until the point I was on stage, but then I felt confident. My friends also gave me a really good pep-talk before which really helped as well.

Kivenas: I was pretty nervous and scared since it was my first time making it to the school level competition. After I recited my first poem I wasn’t as nervous for my second and it was really cool standing on stage saying them to everyone.

Lowman: I was okay and wasn’t too nervous because I don’t get stage fright normally. I get more nervous when I was practicing which makes no sense and is pretty weird, but it’s just what happened.