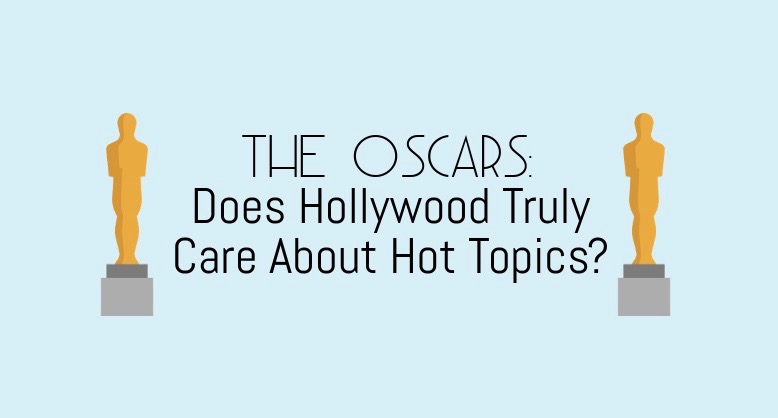 The first Oscars occurred in 1929.

The Oscars: Does Hollywood Truly Care About Hot Topics?

On February 24, 2019, the 91st Academy Awards, otherwise known as the Oscars, aired at 8:00 p.m. This year, the Oscars lacked a host, but the show still kept its audience entertained through its various presenters, as well as the speeches of award recipients. Many popular movies were nominated for awards, including “A Star is Born,” “Bohemian Rhapsody,” and “Black Panther.”

As we have seen over the course of the Oscars’ extensive history, the show has been used as more than just a platform to honor those who work in the arts. Through the commentary of the hosts, winners, and announcers, politics have earned a prevalent role in the Academy Awards. In 2018, for example, the show played a major role in the spread of the #MeToo movement.

However, when we take a closer look at the presence of politics in Hollywood’s most prestigious award show, an important question seems to arise: does Hollywood truly care about the hot topics of our nation, or rather, are they using them to their own advantage?

Danielle Brennan (’19) said, “I feel like the Oscars are just mentioning these topics because they are popular right now. They have the platform, so they are just using it to talk about these subjects when it’s really not the right time or place to do so.”

Oftentimes, it seems as though one of society’s major issues will be placed in the limelight only to be forgotten the following year. For instance, despite the emphasis on the #MeToo movement during the 2018 Oscars, the Academy failed to mention sexual assault at all this year. Instead, the Academy Awards focused on the topics at the forefront of the country’s attention, such as immigration and racism.

Although these topics are just as important as the threat of sexual assault throughout the United States, how, as the audience, can we determine how concerned the entertainment industry truly is in finding solutions to social justice issues?

In relation to the #MeToo movement, the Academy Awards made a point to make a stand against sexual assault last year. Yet, men who had previously been convicted of sexual assault were still given the honor of winning an Oscar during the awards, which were used to bring light to the trauma experienced by victims of sexual assault.

On one hand, the presence of politics throughout the Oscars allows various celebrities to provide a voice to those who do not have one. During this year’s Oscars, the direct address of social justice issues throughout the United States, specifically immigration, was a recurring political theme.

For example, Rami Malek, who won Best Actor for his role as Freddie Mercury in “Bohemian Rhapsody,” mentioned within his speech that he is a first generation American.

In addition, recipient of the award for Best Director Alfonso Cuarón, who directed the movie “Roma,” made a statement surrounding immigration.

Cuarón said, “I want to thank the Academy for recognizing a film centred around an indigenous woman, one of the 70 million domestic workers in the world without work rights. A character who has historically been relegated to the background in cinema. As artists, our job is to look where others don’t. This responsibility becomes much more important in times where we are being encouraged to look away.”

Despite the power behind these statements, it is also important to take into account our nation’s current news. Lately, President Donald Trump’s attempts to fulfill his promise of building a wall around the border has brought more attention to immigration within the United States. The presence of legal and illegal immigrants within our country is a controversial topic for the citizens of the United States, who hold many different opinions on the matter.

In the context of these matters, the mention of immigration throughout the award show seems more intentional than heartfelt. For example, actor Javier Bardem’s statement during the presentation of an award could be seen in this way.

Bardem, who spoke in Spanish, said, “There are no borders or walls that can restrain ingenuity and talent.”

"There are no borders or walls that can restrain ingenuity and talent," Javier Bardem says in Spanish as he introduces the Best Foreign Language Film category. #Oscars https://t.co/jUTPEwRqUN pic.twitter.com/wuq6aaFZ2Q

In contrast, during last year’s Oscars, attendees did mention immigration; however, they did so by addressing the “Dreamers” of our nation, a reference to those affected by the then current threat to the DACA program.

Hira Khan (’19) said, “I think that it is great that these celebrities are using their platform to address issues that matter, especially on a world stage like the Oscars, which millions of people watch. However, the inherent elitism that is built into Hollywood and the Oscars overlooks the plights of the people who are actually facing these problems throughout the United States. You can talk about the problems all you want, but in the end, the people talking about them are rich and white — their perception of such problems are innately skewed by the privilege that characterizes everyday of their life. They need to  recognize their privilege and use their influence to empower the marginalized with platforms. They cannot and should not be speaking for these communities; they should be wielding their power to bring to light the voices of others.”

On another note, racism was also frequently mentioned during the Oscars. Winner for Best Adapted Screenplay Spike Lee gave an emotional speech detailing his family’s own history with slavery, leaving the audience with the message to “make the moral choice between love versus hate” during the 2020 election.

Lee said, “Before the world tonight, I give praise to our ancestors who have built this country into what it is today along with the genocide of its native people. We all connect with our ancestors… The 2020 presidential election is around the corner. Let’s all mobilize. Let’s all be on the right side of history.”

During the 90th Academy Awards, the show also incorporated racism and the lack of diversity among nominees in the past. Overall, the mention of racism within the Oscars is probably the most genuine outlook on the problems the United States currently faces.

In conclusion, those who have gained fame within our society have a responsibility to give a voice to those who do not have one. While there is truth to this obligation, the important issues of our time should not be diminished to a topic that can be pushed aside the following year or even worse, as a simple joke or comment.