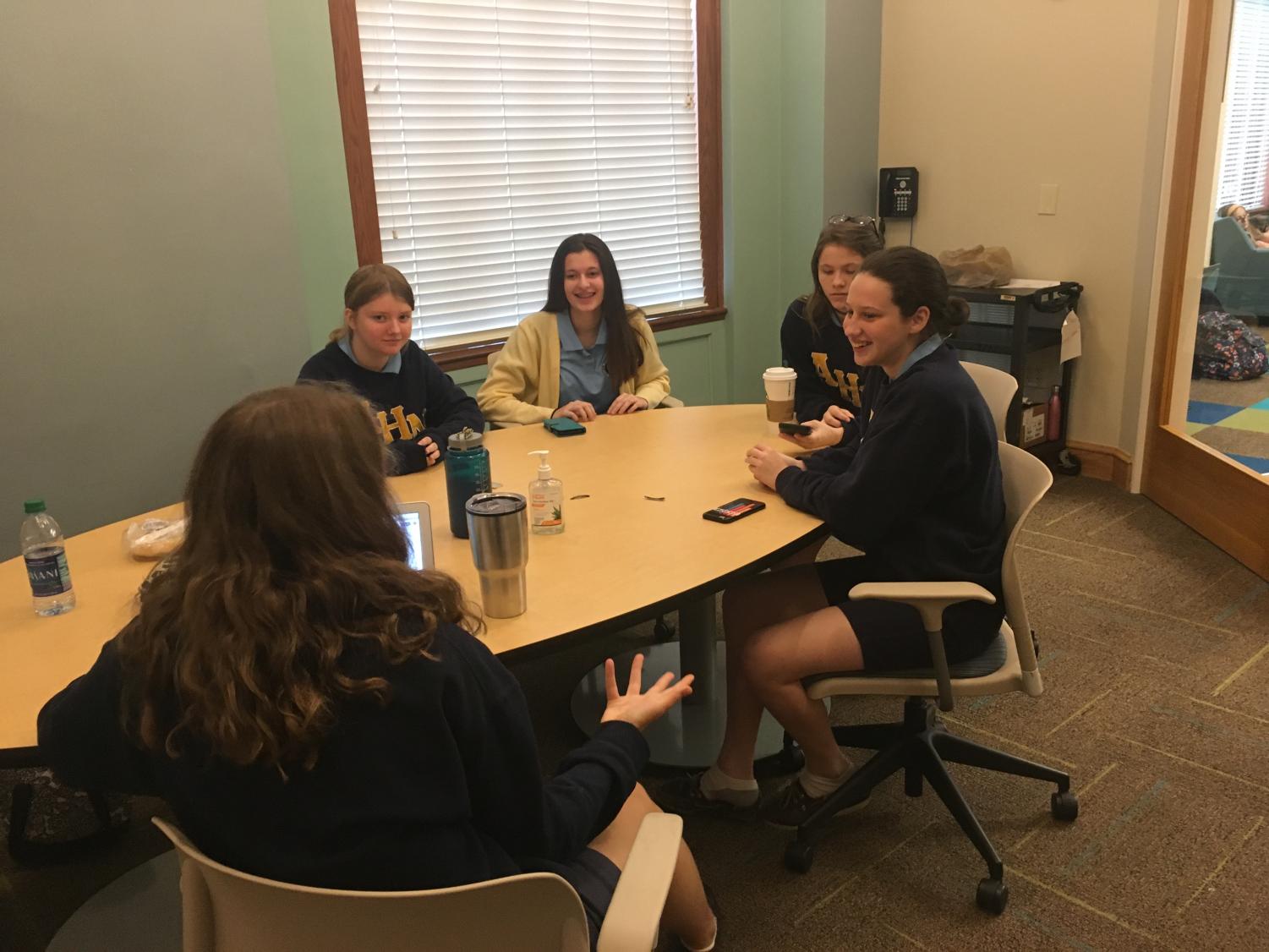 According to the Human Rights Campaign, only 27% of queer high school youth can “definitely” be themselves at school. (Photo Credit: Adrianna Radice/Achona Online)

According to the Human Rights Campaign, only 27% of queer high school youth can “definitely” be themselves at school.

In light of the school year coming to an end, many students are in the midst of various end of the year assignments and the like. This is especially true for the seniors who have been participating in the Academy’s AP Government class all year. Since they came back from Christmas Break, the students have been hard at work bringing to life the project that was assigned to them by teacher Stacy Filocco. These projects, known as the “Castfire Project”, a tribute to the famous prayer which centers around Mother Marie Rose and her endeavors to always make the world a better place, have prompted the seniors to attempt to elicit change within their community.

For seniors Greta Dieck, Robin Sailor-Zander, and Adrianna Radice, these changes happen to start right here within the Academy walls.

For their project, the three girls decided to enact change within the communities incredibly important to them, those being both the LGBTQ+ community as well as their personal AHN community.

“For me personally, I felt very strongly that high school students in general need spaces in which they can feel accepted in all facets of life including sexual orientation. Understanding that it can be incredibly difficult for students to take to reach out to a community, I feel it is incredibly important that this is made easily accessible for all students,” says Dieck (‘19).

While the girls are still in the process of establishing this organization within the Academy community, they have taken various steps in order to ensure that they are informed and responsible advocates for a sensitive cause such as this. The students began their journey by doing extensive research into their chosen issue of inequality, that being the multiple injustices which can be found amongst LGBTQ+ youth.

With this collected information, the three seniors were able to put together a proposed action plan for what they believed could be a step towards at least minorly solving this issue in the community. This plan manifested itself as being an organized system of support for LGBTQ+ students, as well as allies, here at the Academy, a club which would eventually manifest itself as Advocates for Inclusivity and Mentorship (AIM).

The trio’s planned mission of AIM is to be a space in which those who identify as LGBTQ+, as well as allies, can come together to become informed about topics surrounding the LGBTQ+ community while simultaneously providing a safe space for those LGBTQ+ students who may need a support system here at school.

Over the past few weeks, the girls hosted various roundtable discussions in order to get a gauge of some of the issues involving LGBTQ+ matters at the school as well as how many people might be interested in this type of club. At these discussions, the students were able to address some areas which they feel may be lacking in terms of LGBTQ+ awareness at Academy and what they would like to see from a club such as this one.

“The round table discussions we had were exceptionally open and gave us all insight into each other’s experiences. I loved being able to hear everyone discuss such a controversial issue openly and with confidence in a way that gave them voices they may have not previously had in regards to this particular subject matter,” says Savannah Armentrout (’22).

After holding these discussions, the girls found themselves with the task of establishing leadership for the club next year  due to their positions as seniors who will be leaving. The trio held interviews in order to determine who would be best suited to ensure the club’s mission is carried out next year. They are now in the process of finalizing these decisions and have said that there will be three positions filled so that there is a diversity amongst the leaders.

Though the club is still in the process of being established, the seniors have received great support from Principal Stephanie Nitchals in terms of having a system such as this one within the Academy walls. There may still be some obstacles the girls have to get through in order to create an organization like this in a Catholic community, however the path they have already taken and the positivity they have been met with exemplifies the progress that is being made every day, even at Academy.

“I can’t tell you how proud of my group I really am. Through this process I’ve been able to see just how passionate and genuinely caring students are towards our mission. As far as Castfire goes, I feel like I’m actually in a position where I can make a difference and leave behind high school better off than when I first arrived, and that’s all I could really ask for. Through countless days of research and staggering statistics, we were able to take something that we are already passionate about and understand the logistics in a way that allows for us to pave through unknown territory,” says Zander (’19).