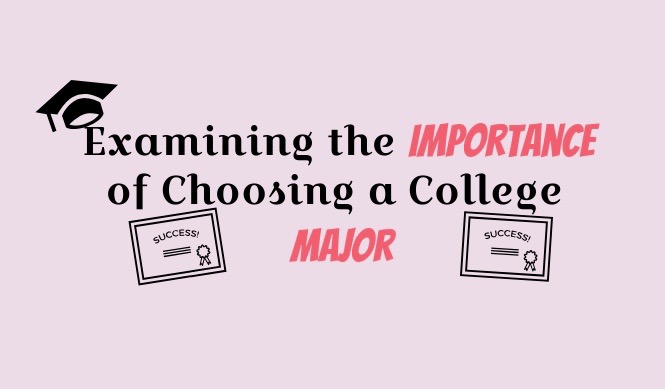 Emily Catherine Haly (’19) said, “I think I am interested in doing something involving marketing within business. I think it would be really cool to do something like work with Coca-Cola and their marketing.” ((Photo Credit: Juliana Ferrie/Achona Online/Piktochart))

Emily Catherine Haly (’19) said, “I think I am interested in doing something involving marketing within business. I think it would be really cool to do something like work with Coca-Cola and their marketing.”

Examining the Importance of Knowing a College Major

As the Academy seniors begin to make their college decisions, they are faced with many important questions surrounding their futures. Their next four years of education will set the foundation for their adult lives, specifically their professions. With this in mind, many Academy seniors have put a lot of thought into the major they should choose. Although many seniors know what career they would like to pursue, many others do not. Despite the pressure on students to have their entire lives figured out, this expectation should not be perpetuated. Whether they know what they want to do or they do not, college is a time for young adults to find themselves. Thus, they should not be rushed into choosing the right major for them.

In many instances, a lot of emphasis is placed on a student’s major. A lot of times, adults expect incoming college freshmen to have their future plans figured out completely. However, this is rarely the case. According to Penn State’s “The Mentor,” “20 to 50 percent of students enter college as ‘undecided’ and an estimated 75 percent of students change their major at least once before graduation.”

A person’s choice in a college major will play a large role in the remainder of their lives. Certain jobs require a specific course of education to acquire a position in that field. However, it is perfectly fine to save this decision for later. When students begin college, they still have plenty of things to learn about in terms of not only the adult world, but also about themselves. Consequently, they should not feel stressed about picking a major until they can first understand who they are as people.

adults PLS stop asking me what i want to do w my life !!!! IDK what college I wanna go to or what I wanna major in !!!! pls im still 2 young

In addition, many colleges are fully aware of the weight of this decision, and as a result, they intentionally build time in for students to have a chance to experiment in many fields before they are required to declare a major. This time allotted to students  allows them to gain a better idea of what they want for their future and to find the major that truly interests them.

Danielle Brennan (‘19) said, “I don’t feel pressured to pick one [a major]. I’m not too worried because I have a general idea of what I want to do. The school that I’m probably going to go to doesn’t allow freshmen to declare their major until after the winter term so I have a chance to take classes relating to different majors before committing to one.”

It is important for each senior to understand that it is not better to be either decided or undecided. Instead, they should realize that as they grow and change, so will their interests. Those who are set on a certain path may find that they were not cut out for that career after all, or they may find that they simply are not as intrigued by their major as they thought they would be. In the end, what truly matters is that each student finds a major and career path that they are passionate about, which will allow them to lead their futures lives with contentment.

While many Academy seniors are still undecided, other girls have already chosen their majors. The Class of 2019 has a wide range of interests, which can be seen in their chosen majors.

Here is a list of some of the chosen majors and minors from the Class of 2019:

Caitlyn Asher (‘19) said, “Right now, I am going in as an accounting major, but I will probably end up in something else in that general area. Even if I don’t like it, it is a starting point. If I don’t like accounting, I can always go into something else. Since business schools are harder to get into than other majors, it will be easier for me to switch out than to switch in.”