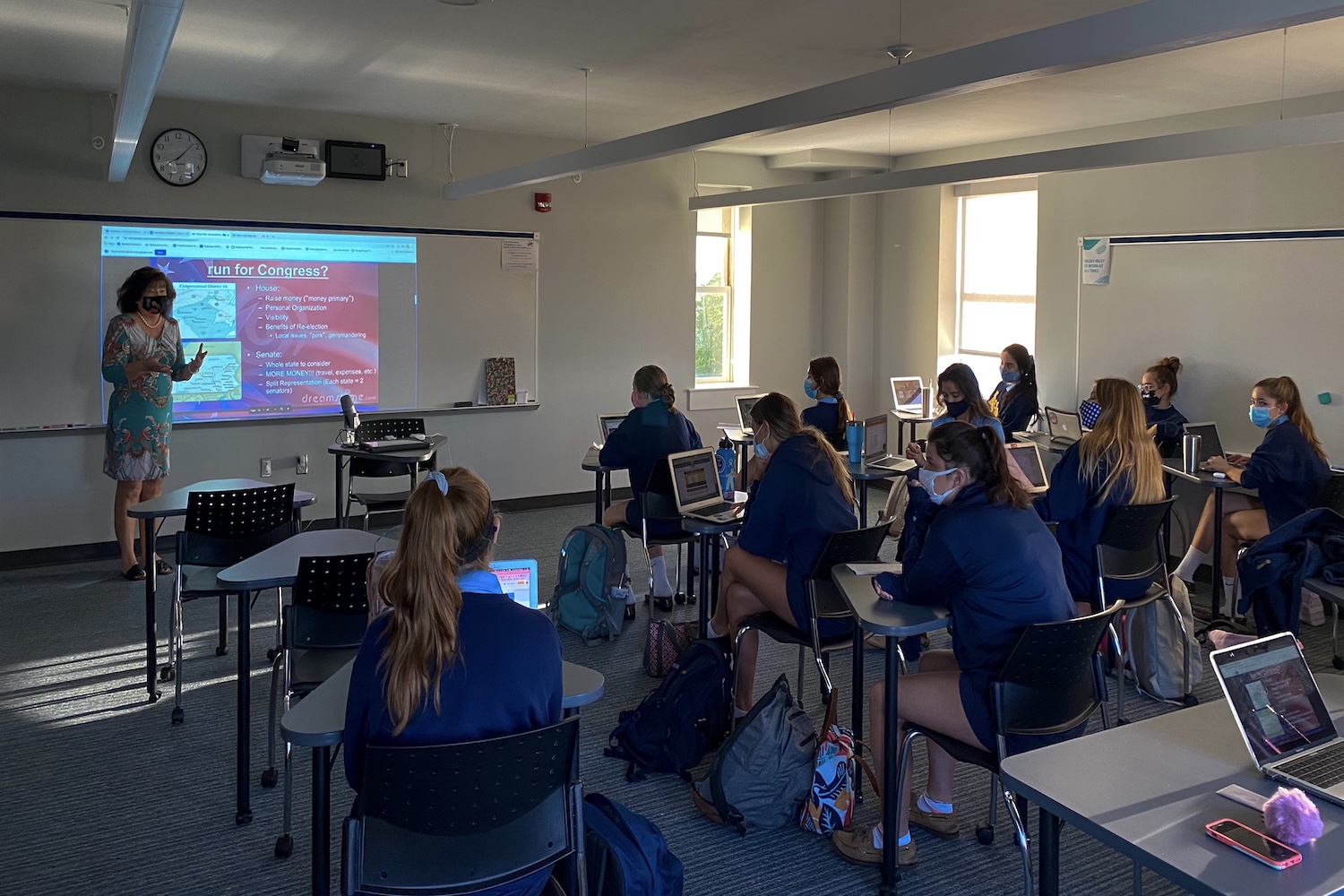 The American Election: 2020 is taught during sets one and six and has a total of about 45 students enrolled. ((Photo Credit: Adriana James-Rodil/Achona Online))

The American Election: 2020 is taught during sets one and six and has a total of about 45 students enrolled.

Every four years, The American Election course returns to the Academy curriculum as a first semester elective. Economics Teacher Beth Chase first taught the course in 2016, but she describes how the pandemic has caused major differences between the then and now elections: “The pandemic is going to change the way this election even plays out.”

In addition to learning about COVID-19’s role, students will also learn the process of choosing the President of the United States and Florida’s role as a swing state while being able to draw statistics and examples from the present.

Kailey McDonald (‘21) said, “Each student is given two states at random to keep track of during this year’s election so that we can report the facts back to our classmates. Even though I am too young to vote in this year’s election, I believe this class will teach me how the other states and how the election itself operates for when I finally am able to vote.”

Students are also engaging in meaningful discussions and are able to express their opinions during class, but are encouraged to be open to varying ideas as well.

“So far I am very pleased with the American Election class. At first, I was scared to join because I am not big on discussing political views due to the tension it creates, but Mrs. Chase is doing an amazing job at keeping this an unbiased class,” McDonald said.

This year’s election is both historic and controversial as debate surrounding key issues increases the tension, like McDonald said, between the Republican and Democratic parties.

I’ve heard stories like this from my constituents, too. We must protect @USPS. https://t.co/AIbDaYc0Si

Although a health crisis, COVID-19 has been thrust into the political arena where the wearing of masks has caused a divide between Americans, BBC News reports, despite the CDC recommending their use in public settings and when around people not in the same household. COVID-19 has also caused economic problems throughout the country. For example, the Florida Department of Economic Opportunity announced Tampa’s unemployment rate increased by 6. 4% in July, and the “area private-sector employment decreased by 57,400 jobs (-4.7 percent) over the year.”

The United States Postal Service has, as of late, been in the limelight because, due to COVID-19, more Americans will vote via mail-in ballots than any previous election. Postmaster General Louis DeJoy is set to testify to the Senate Homeland Security and Government Affairs Committee on Friday, Aug. 27, on the account that recent changes, such as “cutting overtime and limiting post office hours” and deciding to “stop taking letter collection boxes off streets in Western states,” will cause many votes to not be received on time.

Cassie Hiatt (‘22) said, “Personally I do see the USPS controversy as a problem in this election, especially since COVID-19 is still a really big factor in millions of peoples lives. If the mail is slowed down, it’s more of a chance of votes not being received/counted on time. As a soon-to-be voter in a couple years, I would be very upset if I didn’t get to use my voice in government because of slowed mail services.”

So, how are people going to be able to vote and exercise their rights?”

This is further dividing the two major parties as the majority of Democrats prefer mail-in-ballots, which they highlighted at the Democratic National Convention last week, whereas the majority of Republicans prefer voting in person, according to a CNN poll.

Not only will the 2020 election be remembered for its controversies, but also for its first virtual Democratic and Republican National Conventions. The DNC was a four-day affair which began on Aug. 1 where Kamala Harris made history as the first ever black and Asian American vice presidential nominee. The RNC, on the other hand, began Aug. 24 and also featured key-note speakers like Kayleigh McEnany — an Academy alumni.

Although the RNC relied “on in-person participation more heavily” than the DNC, both events were lacking the usual large and rambunctious crowds that date back to the 1800s and instead were replaced with a few mask-covered individuals who, at the RNC, even wore badges that took note of who has been around whom in Charlotte, North Carolina.

However, according to “The NPR Politics Podcast,” concerns have arisen surrounding the last night of the RNC, which took place on Thursday, Aug. 27, where there was little social distancing and use of masks. In addition, White House officials such as Secretary of State Mike Pompeo and Homeland Security Secretary Chad Wolf are being accused of violating the 1939 Hatch Act because of their participation in the RNC. The act prohibits federal employees’s involvement in certain political events, except the President and Vice President, because it intertwines political and government business.

Acting DHS Secretary Chad Wolf presides over a naturalization ceremony at the White House during the RNC. His appearance is an apparent violation of the Hatch Act, which prohibits federal employees from performing political activities on duty https://t.co/tz1YGPbJoz pic.twitter.com/N0oLsprTZM

With these milestones and dilemmas at hand, the Academy’s American Election class will have no lack of discourse.

“I think the racial divide and Black Lives Matter [are important issues]. I think that’s an important part in the history of the United States, and it’s very reminiscent of what we went through in the 60s, and we don’t want to go back there. People have to learn to get along and learn to live together, and we’re all American citizens and we all have to be treated fairly. That’s what I’m hoping the girls come out of the class. We may disagree, but we have to learn to get along and find common ground,” said Chase.