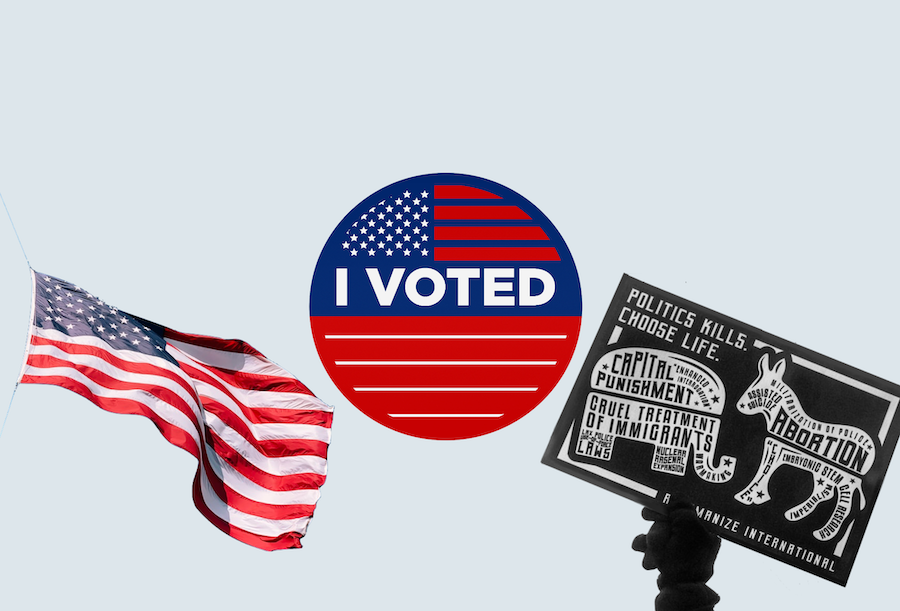 According to the PEW Research Center, 37% of voters identified as Democrats as opposed to 26% that identified as Republicans. (Photo Credit: Katia Huddleston/Achona Online/Piktochart)

Analyzing the Republican and Democratic Parties

The two-party system has dominated American politics since the Founding Founders. But long gone are the Federalists and Anti-Federalists of the 18th and 19th centuries. Now, the Republican and Democratic parties split American voters. Their narratives influence media outlets, Congressional seats, and can turn Americans against one another come election year. Both claim to know what’s best for the United States and its citizens but, more often than not, Republicans and Democrats have opposite views on how to get there.

Republicans side with capitalist positions while the Democratic party is more socialist-leaning. Essentially, Democrats believe that citizens should collectively pay for community well-being such as health care or welfare checks while Republicans disagree, believing that individual spending should be prioritized over government spending.

Where Democrats and Republicans often come into conflict regarding budgetary spending is to what extent the government should offer economic assistance to its citizens. “Unless we drastically change Washington’s spending habits,… future generations of  Americans will be crushed by an enormous national debt,” says the Republican National Committee, or GOP. According to NPR, the U.S National Debt hit a record-breaking $22 trillion dollars in debt in February of 2019. However, around two trillion dollars were spent in the first two years of Republican President Donald Trump’s time in office which is just a few billion short of Democrat President Barack Obama’s average of about 3 trillion.

The Democratic National Committee, or, DNC, says, “Democrats won’t be satisfied until every American who wants to work can find a job.” Republicans typically take issue with this kind of wording as they believe that Americans should all hold jobs in an effort to boost and support the American economy.

Additionally, Republicans are against high taxes to pay for many Democrat suggested welfare programs. The GOP is concerned that people will take advantage of “crony government handouts.” Regarding health care, in particular, the Democratic National Committee places emphasis on the idea that “every American should have access to quality health care” while the GOP contests that the health care system shouldn’t be headed by the government and should instead put “patients and doctors in charge of their health care decisions.”

The state of the environment is also an issue between the parties. Democrats are associated with wanting to actively fight against climate change. This is most likely a result of a common narrative between Democrat politicians such as New York Representative Alexandria Ocasio-Cortez’s proposal of the Green New Deal, new legislation designed to cut carbon emissions.

The GOP agrees that current dependence on Middle Eastern oil and other non-American energy sources is exorbitant. However, many Republicans take issue with the Green New Deal. According to Ocasio-Cortez’s office, one of the Green New Deal’s goals is a guaranteed job “with a family-sustaining wage, adequate family and medical leave, paid vacations and retirement security” for every American. Many Republicans argue that the $93 trillion Green New Deal will actually leave many Americans involved in the oil industry unemployed. “It’ll kill millions of jobs. It’ll crush the dreams of the poorest Americans and disproportionately harm minority communities. We will defend the environment, but we will also defend American sovereignty, American prosperity, and we will defend American jobs,” says President Trump.

According to the Pew Research Center, as of 2017, Democratic voters outnumbered Republicans 33% to 26%, with voters registered as Independents taking the majority at 37%. Republicans take a majority of the White vote by about 51%. However, as of 2016, the White Democratic vote has actually seen a rise from 40% to 43% since 2009. As the majority race, White voters voting primarily Democratic could suggest a potential change in the White House come Election Day. Asian-American support for the Republican party has also decreased in recent years. In 1998, more than 33% were registered Republicans in comparison to a staggeringly-low 12% in 2017.

African-Americans register overwhelmingly in favor of Democrats with more than 84% identifying as Democrats and fewer than 8% as Republicans. Though, this minority group has seen a change in their demographic makeup since the Obama presidency: about two-thirds of African American voters have classified themselves as Democrats within the last several years, down from three-quarters since the first half of Obama’s time in office.

63% to 28% of Hispanic voters are more likely to lean Democratic than Republican though this can vary depending on a Latino voters’ background. For example, in the 2016 presidential election, where around 62% of all Latinos in Florida voted Democrat, 54% of Cubans voted Republican. Florida houses almost 70% of the Cuban population in the United States.

The Democratically-leaning Hispanic vote, specifically, can be understood with a look at both parties’ positions on immigration. The GOP says that “[i]mmigrants have undeniably made great contributions to our country… any national immigration policy must put the interests of our existing citizens first.” Hispanics often take issue with this stance as many have immigrant families or are immigrants themselves. For example, the DACA program, deferred action for childhood arrivals, implemented by Barack Obama in 2012, allowed children of illegal immigrants to remain in the country if they arrived in the United States prior to reaching their sixteenth birthday. This decision was celebrated in the Latino community and was expected to be a key motivator for Latino voters in the 2016 election.

Both parties are also torn about how to handle gun rights and policies. “Our country was founded on the promise of individual liberty,” says the GOP. “Our party will always fight on the side of our Consitution.” Nonetheless, many Democrats find that the Republican party follows the Constitution too strictly and that modern society needs to adapt in response to an average of 100 people dying from gun violence per day in the U.S. “We believe we should expand and strengthen background checks for those who want to purchase a firearm – because it shouldn’t be easier to get a gun than a driver’s license,” says the DNC.

Anna Reins, a Democratic junior, says, “I associate with the Democratic party because I am passionate about protecting the environment, social equality, and the rights of minorities including different races and the LGBTQA+ community. I believe that the democratic party is more focused on these views.”

Cassie Hiatt (‘22) identifies as a Republican. “For me, the Republican Party’s stances on issues such as abortion, the 2nd amendment, and immigration laws most closely reflect my own personal beliefs,” says Hiatt. “Of course they won’t line up 100% perfectly and that’s why it’s important for me to do research on issues like the ones I mentioned above.”

“Personally, I don’t want to be associated with either of the two main parties,” says Katelyn Butler (‘22). “I agree with certain ideas on both sides so I don’t want to pick.”

Some students, however, find difficulty sharing their political views. “I’m uncomfortable being publicly open about my political beliefs because I feel if I were to mention what my opinions are people [will] assume a lot of traits about me. I don’t feel like I have a chance to explain myself once I say what I believe since many people jump into conclusions right away,” says junior Claire Wong. “To some people, they think I’m just avoiding the conversation. So, I rather not be involved unless it really is something important to me.”